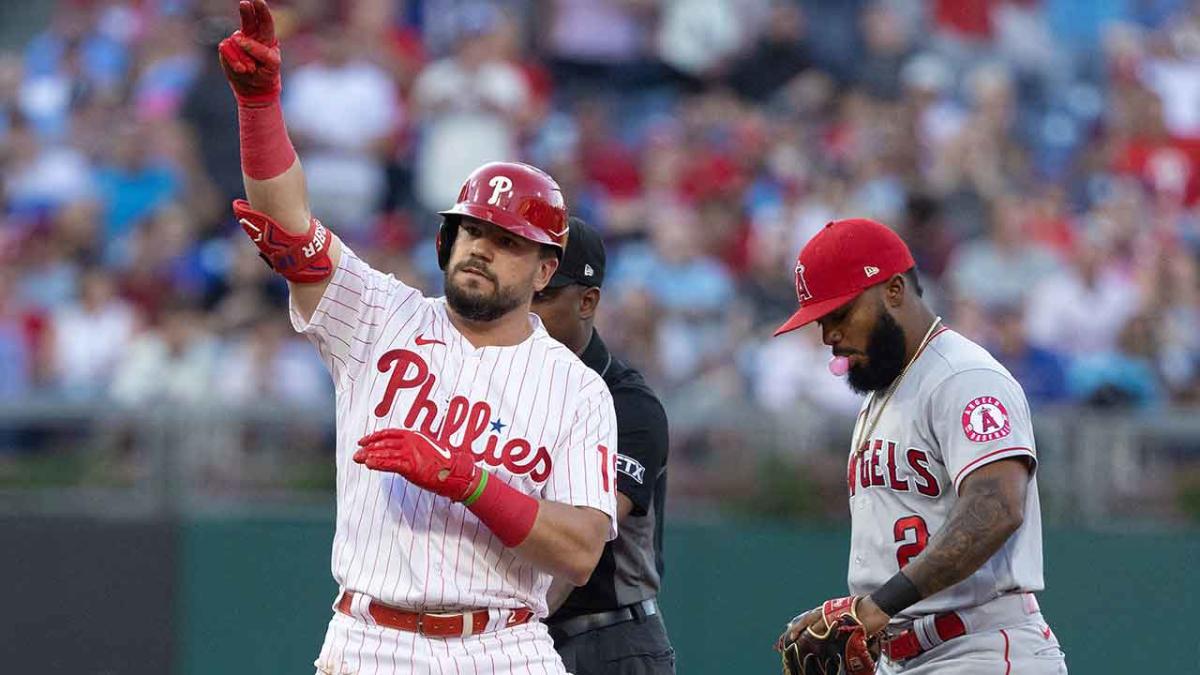 Early runs, solid defense, no bullpen meltdown, late insurance … wherever he is, Joe Girardi’s got to be thinking, “Really?”

The Phillies’ offense jumped an Angels starting pitcher for the second straight night, scoring five first-inning runs in a 7-2 win.

Rob Thomson is 2-0 as the interim skipper since taking over for Girardi, who was fired Friday morning. Thomson begins his tenure with a series win over a reeling Angels team that has lost 10 in a row.

The Phillies are 24-29 after winning three straight.

“Yesterday, obviously a weird day,” Rhys Hoskins said during an in-game interview on FOX. “The business of baseball shows itself every once in a while but it’s cool to see the boys just get out on the field and play the game.

“We’re pretty lucky that some of us have been with Rob Thomson for a couple of years and there’s a lot of familiarity. It has to be business as usual. I think that’s the nature of the baseball season, it’s a day in and day out thing. Unfortunately, the game just goes on.

“Business as usual and let’s go win some baseball games.”

The tone was set immediately by Kyle Schwarber, who nearly homered on the first pitch of the bottom of the first inning for the second straight game. He crushed one to right field that a fan reached over the wall to interfere with, resulting in a double.

Schwarber is locked in and this is an example of how he can be a catalyst as an unconventional leadoff man. In his last five games, he’s 7 for 18 with four homers, a double and five walks.

The Phillies were not fooled out of the gate by Michael Lorenzen, who entered with a 3.19 ERA. Eight of the first 10 batters reached, three via walks. J.T. Realmuto and Johan Camargo drove in two apiece with a double and a single.

Camargo’s two-out hit was huge. As productive as the Phillies’ first inning was, it may have given the Angels momentum if they escaped it by retiring Camargo and allowing only two runs, especially with how Lorenzen settled in to fire five scoreless frames thereafter. Camargo was behind in the count with the bases loaded before working it full and singling in a pair. It extended the inning for Mickey Moniak, who drove in the fifth run with an infield hit.

Camargo later added another big knock, a two-run single in the eighth that gave the Phillies more breathing room and enabled them to use Connor Brogdon in the ninth inning rather than closer Corey Knebel.

Realmuto doubled three times, a career-high. Over his last 11 games, he’s 14 for 35 (.400) with five doubles, a triple, a homer and 9 RBI. He had a good game on both ends, also throwing out Shohei Ohtani attempting to steal on the right pitch, an 81 mph curveball in the first inning. Realmuto has thrown out 9 of 18 would-be base stealers, leading the majors at 50 percent.

Zack Wheeler, the National League Pitcher of the Month in May, picked up his fourth win. He struck out nine, all on fastballs, including Mike Trout twice. Trout is 0 for 8 in the series and hitless in his last 23 at-bats, the longest stretch of his career.

Despite the strong line (6 IP, 2 ER), Wheeler was not quite at his sharpest, pitching out of the stretch in each of the first five innings and putting multiple men on base in three of the six. The biggest inning was the fifth, when the Angels had the top of the order due up for the third time after Lorenzen had retired 10 of 11 Phillies. Alec Bohm began the inning with a clutch play, diving to his left and firing a strike to first to retire Matt Duffy. Ahead of Ohtani and Trout, that’s a crucial moment. Wheeler allowed a run in the inning but that was it, thanks to his success vs. Trout and that play by Bohm.

Bohm had an eventful night. After striking out in his first AB, he took it out on the bat rack and was bloodied in the neck area when a piece of the bat ricocheted and cut him. He stayed in the game and just missed a two-run homer his next time up, flying out 401 feet to Trout in center.

Brad Hand and Seranthony Dominguez each threw a scoreless inning in relief. Hand’s ERA is down to 1.13 in 23 appearances and he has not allowed a run since May 4. Dominguez hasn’t been scored upon since May 3.