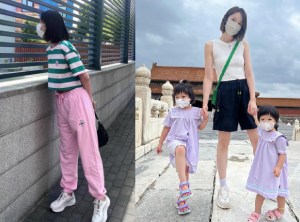 Above: Gabby waves goodbye to her parents on Day 1 of school in a new city!

Accepting Eric Tsang’s (曾志偉) invitation for the position of Chief Creative Officer at TVB in 2021, Wong Cho Lam (王祖藍) continued being active in mainland China to promote partnerships between the station and major Chinese streaming platforms. From traces on social media, the 42-year-old, his wife Leanne Li (李亞男) and their two daughters have since relocated to Shanghai!

On September 1, he posted about them sending their 3½ year-old daughter Gabby (王天韻) to school, and captioned “School’s starting! Parents’ unified pose on day 1 of school”. Donning a navy blue and red school uniform, an adorable Gabby is seen carrying a backpack and waving to her parents in one photo, while Leanne takes a peek into the school grounds in another.

Apparently, the celebrity couple has taken a leaf out of the book of celebrity parents including Jordan Chan (陳小春) and Cherie Ying (應采兒), Yumiko Cheng (鄭希怡), and Ada Choi (蔡少芬) and Max Zhang (張晉) in enrolling Gabrielle at the Shanghai branch of Yew Chung International School (YCIS), known for its bilingual and multicultural learning modules. Ada once revealed that she approached Betty Sun (孫儷) for help in locating a suitable school.

One of the city’s top international schools, the school provides early childhood education all the way to an International Baccalaureate (IB) diploma, for expat children aged 2 to 18, and has become a top choice for parents due to its graduate students gaining entry into the likes of Tsinghua University, Peking University, University of Oxford and University of Cambridge.

With a great reputation, it comes as no surprise that education at the elite international school carries a hefty price tag — the kindergarten program Gabby is enrolled in costs RMB 252k a year, the primary school program charges RMB 292k each year, while annual secondary school fees range anywhere from RMB 326k to RMB 338k.