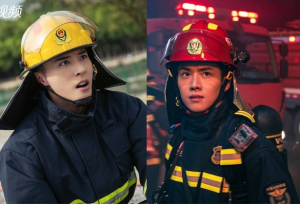 Based in mainland China, actor William Chan (陳偉霆) has been on a roll in both career and romance, with his popularity at a high from well-received dramas, while his relationship with supermodel He Sui (何穗) looks set to advance further as both parties are rumored to have met the parents.

However, his upcoming romantic drama A Date with the Future <照亮你> might well be withdrawn from the broadcast lineup, being surrounded by a spate of cast controversies.

Supporting Cast Mired in Controversies
Engulfed in an infidelity scandal is actor Xu Kaicheng (徐開騁) who faces cheating allegations after girlfriend Crystal Zhang (張天愛) dropped the bombshell that he is two-timing on her with co-star Gilinazha (娜扎).

To add fuel to fire, another cast actor, R1SE’s Renhao (任豪) is suspected of cheating on his girlfriend and abusing his celebrity to skip queues during a routine PCR testing, while a third actor Dong Wang’s (王東) wife has exposed him for domestic abuse, adding that he had continued to hit her even while she was pregnant.

With regulators clamping down on “misbehaving celebrities”, and actor Xu Kaicheng likely to blacklisted, netizens speculate that the firefighting-themed drama might not get to air, with real prospects of financial losses for the production’s investors.

Meanwhile, actress Gilinazha has been rumored to be dropped for a role she was cast in for upcoming drama Derailment <脫軌>, a novel-to-screen adaptation by Chinese writer Priest.