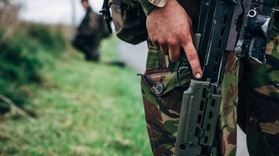 The war in Ukraine is changing the certainties of the established international order with dizzying speed. It is unlikely to leave Ireland’s sacred cow of neutrality untouched.

In recent days the EU has dramatically remade its security policy, promising almost half a billion euro in military aid for Ukraine, the first time the bloc has ever taken such a step.

Germany has performed a colossal u-turn, turning away from decades of a soft-pedalling to Moscow by pledging direct military aid. The western consensus has been reformed – for now anyway – and is acting with boldness and purpose, persuading even neutral Switzerland to join the financial sanctions against Russia. For its part Russia is facing international isolation on a scale hardly even matched by the height of the Cold War.

The chances of Ireland’s traditional policy of military neutrality emerging unscathed from this abrupt redrawing of the lines seem remote. Senior officials, politicians and close observers see imminent pressures on Irish neutrality that could be difficult to withstand.

One of the great qualities of the Irish version of neutrality is that it has been sufficiently elastic that it can be stretched to encompass any reality. Throughout the Cold War Ireland lived effectively under the nuclear-armed umbrella of Nato, while never actually joining the alliance. When the Dáil voted in 2003 to facilitate US troops travelling through Shannon to prepare for George Bush’s war in Iraq, they were assured it did not violate Ireland’s neutrality.

The Green Party MEP Grace O’Sullivan insisted on Monday that Ireland’s contribution to the EU aid to Ukraine was humanitarian, and therefore was appropriate for a neutral state.

O’Sullivan, who admitted to The Irish Times that it was a “very, very difficult one for me”, explained that any fuel that Ireland had paid for should not be used for military uses, only for humanitarian purposes. She admitted this would be difficult to keep track of in any meaningful sense in a country under siege.

But even the most powerful elastic has its breaking point. The lurch in EU foreign and security policy prompted by Russia’s actions in Ukraine will present Ireland with difficult choices that many senior officials and diplomats expect to be undodgeable, and unfudgeable.

One senior official predicts that it will come down to a simple question: “Are we committed to a common European defence – yes or no?”

The answer to that deceptively simply simple in the past has been “yes, but…” or “yes, as long it doesn’t interfere with our traditional policy of military neutrality…”

That dodging of the question has been frowned at but tolerated by Ireland’s EU partners, who have accepted, if not quite understood, Ireland’s approach to these policy questions. But that time may now be passing.

The truth is that the EU has been moving steadily towards a meaningful common defence policy for a long time. That move has been accelerated, gradually first by Donald Trump’s US presidency, then more rapidly by Afghanistan. It will now, many sources involved in the process expect, be turbo-charged by the invasion of Ukraine.

Some officials expect the informal EU Council meeting at Versailles next week, hosted by French president Emmanuel Macron, to be dominated by the question not just of Ukraine, but of the EU’s future defence and foreign policy role. Macron has been pushing for a greater EU defence capability and authority since he came into office.

Ireland, of course, cannot be forced to enter any military arrangements that it finds uncongenial or politically impossible. That is not how the EU works. But nor will it be able to block a move that now seems inevitable. And staying out, or dragging our heels, comes with consequences. The choices, in other words, are narrowing.

“We will be wholly marginalised in the EU if we choose to be left behind,” says Ben Tonra, professor of international relations at UCD and a specialist on EU foreign and security policy. “People may be happy with that, and that’s fine. But it will politically put us to the margins of the EU.”