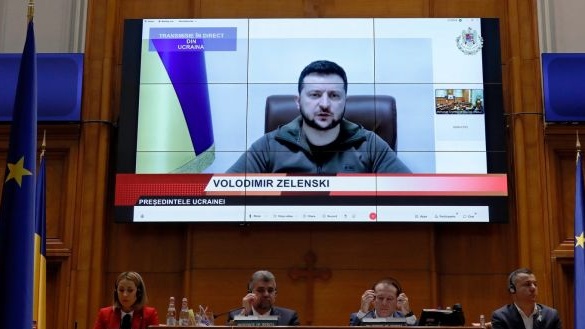 Ceann Comhairle Seán Ó Fearghaíl is due to commence proceedings just before 10am ahead of Mr Zelenskiy addressing the Dáil and Seanad.

The Russian Ambassador to Ireland Yury Filatov did not accept an invitation to the event after Mr Ó Fearghaíl invited all of the diplomatic representations based in the State to the address.

The Oireachtas said on Monday night 45 missions had indicated their diplomats would attend Leinster House.

Opposition leaders again called on Tuesday for Mr Filatov to be expelled from the country during Dáil proceedings.

Taoiseach Micheál Martin said he wanted to “condemn utterly the indiscriminate murder of civilians in Ukraine by Russian forces”, on the outskirts of Kyiv and elsewhere.

“These acts of depravity have to be responded to, and Ireland along with our European Union member states have acted very decisively to this war in the form of the most severe and unprecedented sanctions yet deployed against the Russian Federation, ” he said.

“We took significant measures last week in respect of four senior officials in the Russian Federation embassy in terms of asking them to leave the country and we will work in concert with other EU member states in terms of doing things as effectively as we can to get the most impact as we can.”