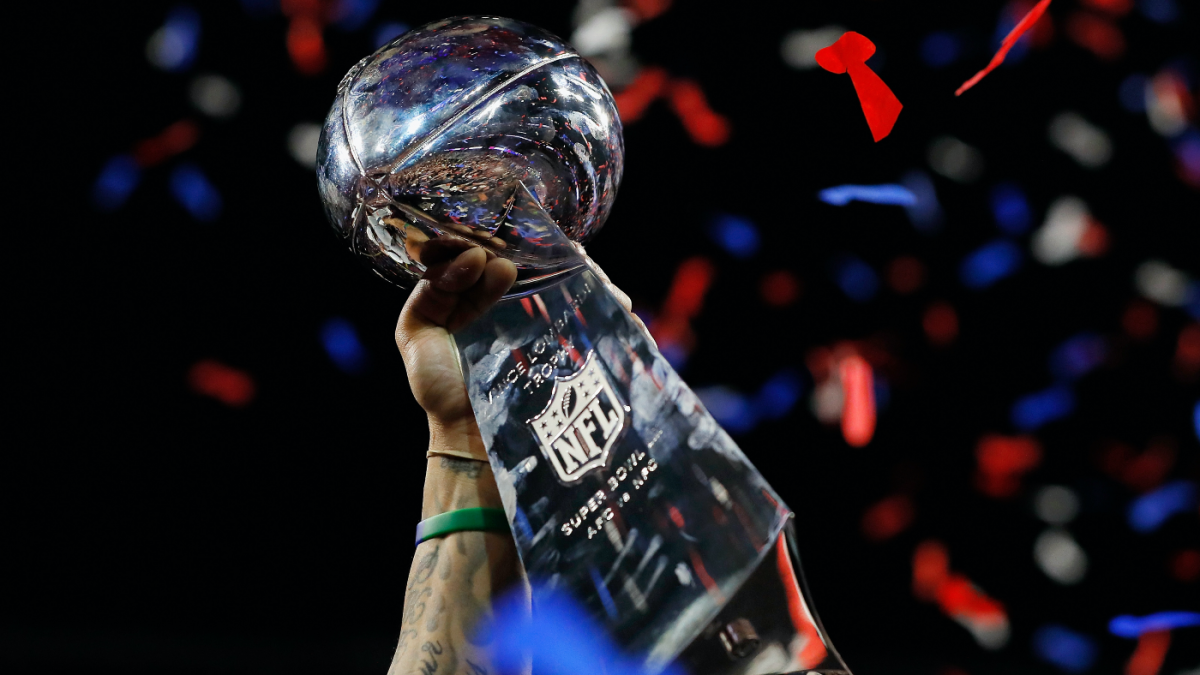 The increased popularity of football has contributed to the Super Bowl becoming the spectacle that it is today. Memorable, iconic moments have also played a role in the Big Game’s enormous ratings. Some of those moments have been forgotten over time. Others continue to replayed in endless loops on TV, Twitter and YouTube.

The world champion of professional football has been decided in the Super Bowl for over a half century. Despite its humble beginnings, the Super Bowl has become the grandest stage in professional sports. On the first Sunday night in February, family and friends (socially distanced this year, of course) gather to watch pro football’s two best teams compete to win the Vince Lombardi Trophy. I’d be remiss not to shout out the people who tune in to watch the commercials and halftime performers, too.

Instead of throwing 5-10 questions at you, we decided to create a Super Bowl trivia test that is made up of one question from the previous 55 Super Bowls. While some of the questions will likely be easy for a knowledgeable fan, there are several questions that will stump even the most diehard football fans. All of the answers are provided below the test. There are six answer keys (one for questions 1-10, another for questions 11-20, etc) if you want to grade yourself periodically throughout the test.

What was the average ticket price for the first game between the AFL and the NFL?

How many passes did Joe Namath throw in the fourth quarter when he led his Jets to a shocking upset win over the Colts?

Which of these statements is true about the Chiefs‘ 23-7 victory?

b) It was the first Super Bowl played outside of Florida

This is the only Super Bowl where:

a) Johnny Unitas played quarterback for the Colts

During Dallas’ 24-3 win, Cowboys great Bob Lilly tackled Bob Griese to record the greatest sack for a loss in Super Bowl history. How many yards were lost on the sack?

Late in the game, Dolphins kicker Garo Yepremian famously threw a pick-six to Mike Bass after Washington blocked his field goal attempt. Despite the turnover and score, the Dolphins ended up winning the game to cap off their 17-0 season. But if Yepremian’s kick was successful, what would the final score have been?

Thanks to Dolphins running back Larry Csonka’s close brush with injury, Super Bowl VIII was the final game where:

a) goal posts were stationed in front of the end zone

b) face masks were optional

c) grabbing a player by his face mask was legal

Which Steelers defender recorded the first safety in Super Bowl history after spending several days in the hospital with pneumonia?

Which future Hall of Fame Cowboys player did Steelers linebacker Jack Lambert famously throw to the ground during the second half of Pittsburgh’s 21-17 win?

This was the first and only Super Bowl win for what Hall of Fame coach?

a) Roger Staubach and Tony Dorsett

b) Roger Staubach and Ed “Too Tall” Jones

In leading the Steelers to a 35-31 win over the Cowboys, Terry Bradshaw became the first QB in Super Bowl history to do which of the following:

c) not get sacked

While they fell short against the Steelers, the Rams received a gritty performance from which player, who played the game with a broken leg?

In helping the Raiders defeat the Eagles 27-10, Rod Martin set the individual record for Super Bowl interceptions. How many did he have?

While his team fell short against the 49ers, which quarterback threw for nearly twice as many yards as game MVP Joe Montana?

Following Washington’s 38-9 loss to the Raiders in Super Bowl XVIII, the NFC won how many consecutive Super Bowls?

This would be the only Super Bowl appearance (a 38-16 loss to the 49ers) for which future Hall of Fame quarterback?

In their 46-10 victory over the Patriots, Chicago’s “46” defense set a still-standing Super Bowl record for fewest rushing yards allowed. How many yards did they allow?

In an MVP performance, Giants quarterback Phil Simms set a Super Bowl record by completing what percentage of his passes?

This was a historic Super Bowl that included the first Black starting quarterback to win a Super Bowl (Doug Williams) and Timmy Smith’s Super Bowl record 204 rushing yards. Washington also set a playoff record by scoring how many points in the second quarter of their 42-10 win?

Before leading his team on a game-winning, 92-yard drive, Joe Montana famously spotted what comedian in the stands while huddling with his teammates?

En route to joining the Steelers as the only four-time Super Bowl champions, the 49ers scored a Super Bowl-record 55 points. What other record did they set?

The only Super Bowl to be decided by one point was won by the Giants after Scott Norwood missed a field goal with eight seconds left. How long was the field goal attempt?

What did running back Thurman Thomas lose just before the start of the game, causing him to miss the Bills‘ opening play?

By virtue of his team’s 52-17 win over the Bills, which coach became the first person to win a national championship and a Super Bowl title?

While he didn’t win Super Bowl MVP, which Cowboys defender filled the stat sheet with 11 tackles, an interception, a forced fumble and a fumble return for a touchdown?

In one of the greatest Super Bowls ever played by a quarterback, Steve Young led both teams in rushing. He also set the still-standing Super Bowl record for touchdown passes. How many did he throw?

The first special teams player to win Super Bowl MVP, Desmond Howard’s third-quarter kickoff return spearhead the Packers to a 35-21 win over the Patriots. How long was Howard’s return?

d) He was poked in the eye

This Hall of Fame quarterback rode off into the sunset after winning MVP honors in his team’s 34-19 win.

After leading for most of the game, the Rams had to hang on after Titans receiver Kevin Dyson was tackled one yard short of the end zone on the final play of the game. Which player tackled Dyson to preserve the Rams’ 23-16 victory?

In what was an otherwise boring game (a 34-7 win by the Ravens), three touchdowns were scored in a record 36 seconds. How were these touchdowns scored?

a) A pick-six and back-to-back kickoff returns

b) A pass and back-to-back kickoff returns

c) A punt return, a kickoff return, and a pass

In New England’s 20-17 upset win over St. Louis, Tom Brady threw an 8-yard touchdown pass to David Patton. Besides being Brady’s first Super Bowl touchdown pass, what else was significant about the play?

b) It gave the Patriots the lead for good

The Buccaneers picked off Rich Gannon a record five times en route to a 48-21 victory. How many of those interceptions were returned for touchdowns?

After a scoreless third quarter, the Panthers and Patriots exploded for a combined 37 points during the final quarter of New England’s 32-29 win. The scoring included the longest pass play in Super Bowl history. How long was the pass, and who were the quarterback and receiver who set the record?

Which receiver famously caught nine passes for 121 yards despite playing through a severely sprained ankle and a fractured fibula?

With his team ahead 7-3 to start the second half, Willie Parker extended the Steelers’ lead after recording the longest run in Super Bowl history. How long was the run?

For the first time in Super Bowl history, the game started with:

a) an onside kick

b) a touchdown on the first offensive play

c) a kickoff return for a touchdown

What color hoodie did Bill Belichick wear during his most infamous Super Bowl loss?

By virtue of the Steelers’ 27-23 win over the Cardinals, Mike Tomlin became the youngest head coach to win the Super Bowl. How old was he?

During his team’s 31-17 win over the Colts, Saints coach Sean Payton became the earliest coach in Super Bowl history to attempt what?

With a 31-25 win over the Steelers, the Packers joined the Giants and Washington as the only NFL franchises to do which of the following?

a) Win multiple Super Bowls as the underdog

b) Win the Super Bowl as a wild-card team

d) Play in a Super Bowl in three different decades

Eli Manning, following his team’s 21-17 win over the Patriots, became the fifth player with multiple Super Bowl MVP trophies. Which of these quarterbacks is not a member of that exclusive club?

Along with catching a touchdown pass, Jacoby Jones returned a kickoff for a touchdown that stands as the longest play in Super Bowl history. How long was his return?

While his team was blown out by the Seahawks, Demaryius Thomas set a Super Bowl single-game record for receptions. How many passes did he catch?

Malcolm Butler came up with one of the biggest plays in Super Bowl history when he picked off Russell Wilson in the end zone with 26 seconds left. Which player was Wilson’s intended receiver on the play?

Von Miller took home MVP honors after forcing two fumbles of Cam Newton in the Broncos’ 23-10 victory. Miller also led his team in sacks. How many did he collect?

Down 28-3, the Patriots rallied to defeat the Falcons in overtime. Which Patriots player scored the Super Bowl’s first overtime touchdown?

In defeat, Tom Brady set a Super Bowl record for passing yards. How many yards did he throw for?

Julian Edelman’s 10-catch, 141-yard effort helped him become the sixth receiver to win Super Bowl MVP. Which of these receivers is not a former Super Bowl MVP?

What Super Bowl record did the Chiefs break during their 31-20 win over the 49ers?

a) Most yards passing

b) Most third-down conversions

Based on how many questions you answered correctly, here’s your evaluation if we were grading you as an NFL player.