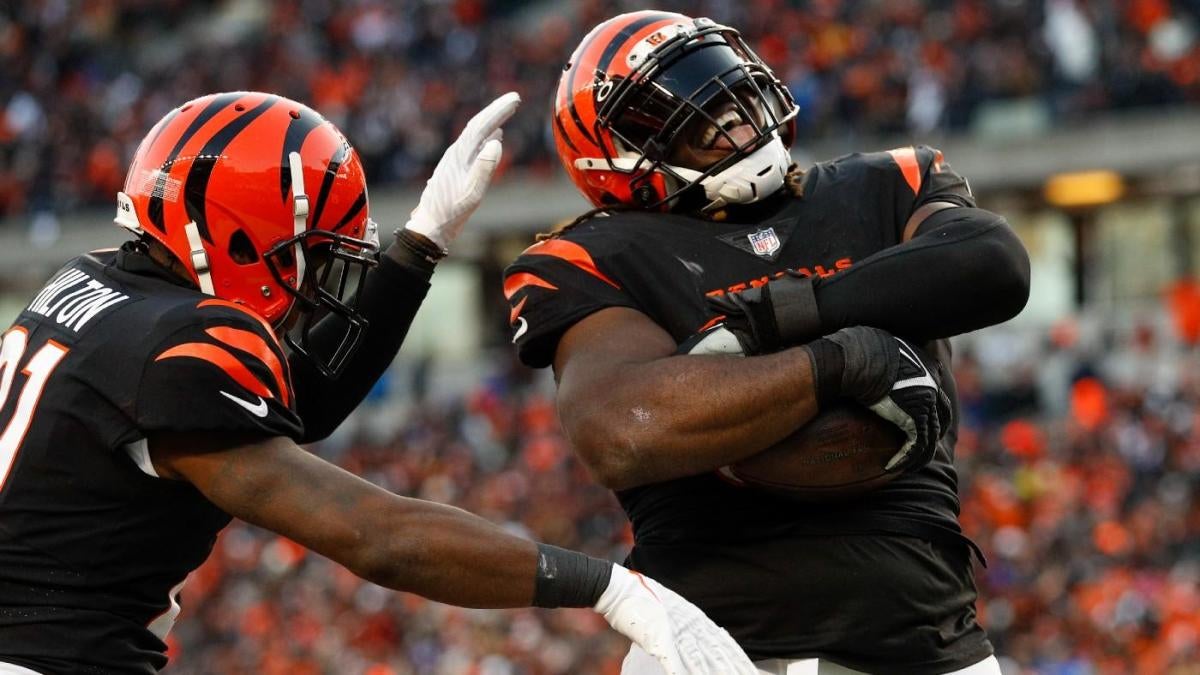 Fortunes can be made because of performance in a contract year. It is especially the case when a stellar postseason validates performance in the regular season. The Super Bowl is an opportunity to make a strong closing statement.

Offensive tackle Trent Brown can attest to it. Who would protect quarterback Tom Brady’s blind side was a big concern for the Patriots during the 2018 offseason after left tackle Nate Solder briefly became the NFL‘s highest-paid offensive lineman with the Giants in free agency. Brown was acquired from the 49ers for what was essentially a mid-fourth-round pick during the 2018 NFL Draft and Isaiah Wynn was selected 23rd overall to fill the void. Wynn tearing his Achilles in the preseason left the job to Brown, who primarily played right tackle with the 49ers.

Brown was up to the task of replacing Solder. After a solid 2018 regular season, he kept Pro Bowlers Melvin Ingram and Dee Ford in check during that postseason.

Brown left the Patriots in 2019 free agency to become the NFL’s top-paid offensive lineman. He received a four-year, $66 million deal with $36.25 million fully guaranteed from the Raiders, which averaged $16.5 million per year.

Here are several Super Bowl participants with expiring contracts who could reap the benefit financially when free agency begins March 16.

Bates admitted his contract status affected his play early in the season. He expressed frustration over a lack of progress on a new contract during the preseason. The 2021 regular season wasn’t up to the standard Bates set in 2020 when he earned second-team All-Pro honors. He has played more like an All-Pro in the playoffs.

Bates is prime candidate for a franchise tag. The safety number projects to $12.911 million (6.201% of the expected $208.2 million 2022 salary cap). Regardless, Bates will likely want more than the four-year, $61 million contract averaging $15.25 million per year the Broncos gave Justin Simmons, who was franchised, to top the safety market before a reset by Jamal Adams with his four-year, $70 million extension worth up to $72 million through incentives and salary escalators from the Seahawks.

A trade sending backup center Billy Price, a 2018 first-round pick, to the Giants for Hill at the end of the preseason attracted very little attention. Hill had the most-productive season of his career with 5.5 sacks and 29 quarterback pressures (combined sacks, quarterback hurries and quarterback hits), according to Pro Football Focus. The trade has taken on added significance with starting defensive tackle Larry Ogunjobi being lost to a foot injury in a wild card playoff game win over the Raiders. Hill has elevated his game in the postseason with increased playing time. He has eight quarterback pressures and 1.5 sacks in three playoff games as well as a timely interception against the Chiefs in the AFC Championship Game. Hill looking to hit the $10 million-per-year mark like interior defensive linemen Jordan Phillips (Cardinals) and Grover Stewart (Colts) wouldn’t be surprising.

It could be an either/or proposition for returning to Cincinnati regarding Ogunjobi and Hill. Ogunjobi had a career-high seven sacks while taking 64.41% of Cincinnati’s defensive snaps (Hill’s defensive playtime was 44.66%) in the regular season. Per PFF, his 40 quarterback pressures were also a career best. Hill has taken advantage of Ogunjobi’s absence since he hurt his right foot in Cincinnati’s first playoff game. Ogunjobi surely will be looking for a raise over the one-year, $6.2 million deal with an additional $1 million in incentives he signed to join to the Bengals in free agency last March.

Uzomah seems intent on playing in the Super Bowl despite the left MCL sprain he sustained against the Chiefs in the AFC Championship Game. He’ll certainly be looking to build off his expiring three-year contract extension averaging $6.1 million per year after a career year of 49 receptions for 493 yards with five touchdowns. Although the Patriots gave Jonnu Smith a four-year contract averaging $12.5 million per year and containing a tight end-record $31.25 million fully guaranteed in 2021 free agency with comparable contract-year statistics (41 catches for 448 yards with eight touchdowns), the three-year, $24.065 million extension ($8,021,667 per year) Logan Thomas signed with the Commanders at the start of training camp is a more realistic target for Uzomah.

Allen was considered a question mark on the offensive line heading into the season because he didn’t take any snaps in 2020 after experiencing a setback in the return from a left knee injury he suffered during the middle of the 2019 season, which was Allen’s first as a starter. Allen’s much-improved play over 2019 led to him being named a Pro Bowl alternate this season. The average salary for starting centers on veteran contracts is currently just over $7.725 million per year, according to NFLPA data. Allen will surely have his sights set on bettering this mark in free agency.

Beckham has been able to resurrect his career to a degree that didn’t seem imaginable when he signed a contract with a base value of $1.25 million ($750,000 in base salary and a $500,000 signing bonus) worth up to $4.25 million through incentives after the Browns released him in early November. As soon as Beckham became acclimated to the Rams’ offense and began gaining the trust of quarterback Matthew Stafford, he started filling the void created by Robert Woods‘ left ACL tear, which occurred just after he signed.

Beckham has been instrumental in the Rams’ Super Bowl run by catching 19 passes for 236 yards with one touchdown during three playoff games. He’s also erasing the perception that he’s selfish and a diva. Head coach Sean McVay and Stafford have called Beckham a great teammate.

Beckham seemed destined for a one-year “prove-it” deal in free agency before his career resurgence. It’s conceivable that Beckham will be able to command a contract that exceeds the $15 million-per-year average of the two remaining contract years he had left before reworking his Browns contract to secure his release.

The Rams sending the Browns a 2021 fifth-round pick for Corbett in October 2019 is an overlooked move. It’s paying off for both Corbett, the 33rd overall pick in the 2018 draft, and the Rams. Corbett’s interior line versatility should be beneficial to him in free agency as he is capable of playing both guard positions and center. Corbett could be pricing himself out of Los Angeles, especially if he thinks he should be paid more than Ereck Flowers, who received a three-year, $30 million contract averaging $10 million per year with $19.95 million fully guaranteed from the Dolphins in 2020 free agency and was traded to the Commanders last offseason.

Gay, a 2019 fifth-round pick who was released by the Buccaneers in the 2020 roster cutdowns, is a restricted free agent. He will likely receive a second-round tender for a projected $3.986 million after having the league’s second-best conversion rate on field goals at 94.1% (32 of 34 attempts) to earn Pro Bowl honors. The most recent relevant data point in the kicker market is the four-year extension averaging $4.6 million per year Daniel Carlson signed with the Raiders in December.

The 32-year-old Miller, who missed the 2020 season because of an ankle injury requiring surgery, balked when the Broncos asked him take a pay cut in advance of the decision to pick up the option on his 2021 contract year worth $18 million. The Super Bowl 50 MVP got a little bit of vindication for refusing to accept pay similar to 32-year-old J.J. Watt’s two-year deal with the Cardinals averaging $14 million per year by earning AFC Defensive Player of the Month honors for September. Little did Miller know at that time he would be dealt to the Rams for 2022 second- and third-round picks just ahead of the Nov. 2 trading deadline.

Miller has given the Rams’ pass rush a shot in the arm. He has seven sacks in the last seven games, including the playoffs. Pass-rushers heading into their mid-30s historically don’t age particularly well, although Miller is clearly showing that there’s gas left in the tank. Miller should be bracing himself to take a pay cut from his expiring six-year contract averaging $19,083,333 per year that made him the NFL’s highest-paid non-quarterback in 2016. A shorter-term deal, somewhere between the Watt deal and his expiring contract, could be in order.

The Rams thought highly enough of Williams to make him the NFL’s only 2021 restricted free agent to receive a first-round tender of $4.766 million. Williams didn’t quite live up to his 2020 performance that led to the tender but nonetheless he solidified himself as a starting cornerback this season. A concern about Williams is he lacks prototypical cornerback size at 5-foot-9. That shouldn’t prevent Williams from getting into the same salary stratosphere as Giants cornerback Adoree’ Jackson, who signed a three-year, $39 million contract (worth up to $44.5 million through salary escalators and incentives) with $26.5 million of guarantees in free agency last year. One team to keep an eye on is the Chargers. Former Rams defensive coordinator Brandon Staley is entering his second year as head coach and the Chargers could have upwards to $55 million of salary cap room.