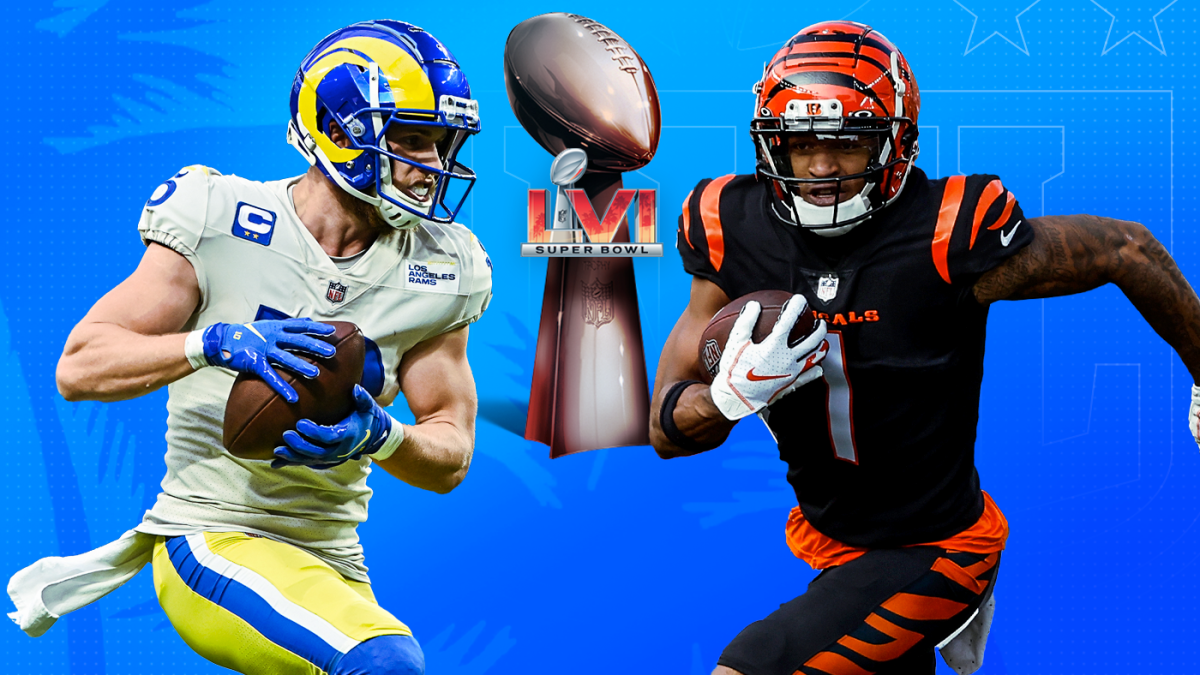 When the Bengals and Rams meet at SoFi Stadium on Sunday for Super Bowl LVI, they’ll bring two of the NFL‘s most explosive offenses to the biggest stage in football. Both clubs finished in the top 13 in terms of total offense in 2021, but they were even better through the air, with the Rams boasting the No. 5 passing offense and the Bengals close behind at No. 8. A lot of the aerial success is due to the quarterbacks: Both Joe Burrow and Matthew Stafford posted MVP-caliber numbers for their squads. But those QBs were also boosted by two of the NFL’s most dangerous receiving corps.

Who’s headlining this year’s group of Super Bowl pass-catchers? Which team has more firepower out wide? Here’s a breakdown of each side’s top four targets at the position:

Both sides are deep and dangerous, but Chase is the most purely electrifying receiver of the entire matchup. He’s also the youngest, at just 21. Like fellow LSU product Justin Jefferson before him, he came out of college as a highly regarded receiver but underrated playmaker, and he made defenses pay all year in a historic rookie campaign. Elite corners have slowed him on occasion, but not for long. What he lacks in imposing size he more than makes up for with game-changing speed after the catch. Even if Burrow doesn’t have a ton of time against the Rams’ pass rush, all he needs to do to give Cincy’s offense a chance is get the ball into Chase’s hands. He’s that fun and important — a perfect toy for a supersized, televised show-and-tell.

Chase’s instant breakout has made Higgins something of a national afterthought, even though he’s one year removed from being a 33rd overall pick and posting 908 yards and six scores as an early Burrow favorite. Just 23, he gives Cincy arguably the most promising one-two duo at WR in the entire league, complementing Chase’s burst with strong size and hands. Whereas Chase may give the Bengals a constant home-run threat, Higgins has the tools to shine where it matters: on key downs, and in the red zone. And if the Rams rightly put most of their attention on slowing Chase, he could have a real path to being Burrow’s steadiest target in the Super Bowl.

The elder statesmen of the starting group at 27, Boyd has been Mr. Reliable since coming into the NFL as a 2016 second-rounder. He’s rarely been the guy, dating to his days as a slot complement to A.J. Green, but he’s been durable working the middle, missing just three games in the last four years, while posting a catch percentage above 70 three times. Simply put, he does all the little things well, acting as a true safety valve for Burrow. That could be even more apparent if the Rams’ pressure prompts Cincinnati to make quicker decisions on shorter throws against a vulnerable L.A. linebacker corps.

A former Ram who spent the first four years of his career in Los Angeles, the 27-year-old Thomas has seen very limited action out wide, with tight end C.J. Uzomah serving as the Bengals’ true No. 4 target. He’d be the first man up in the event of a major injury on the perimeter, however, and has at least played with Burrow before, also hauling in 13 passes and a touchdown in 2020.

If Chase is the most explosive WR in the Super Bowl, Kupp is the most ridiculous, not because of sheer size or speed as much as route-running dynamism. Whenever Stafford drops back to throw, he is available — or will be. Kupp’s grittiness was apparent early on, when only injuries prevented him from starring during the Rams’ last Super Bowl run with Jared Goff at QB. But he’s taken his strengths — supercharged effort, plucky hands and deceptive shiftiness — and combined them with better conditioning this year to produce a historic, nearly 2,000-yard effort. Bengals slot corner Mike Hilton is feisty with ball skills, but Kupp might be the best model of those traits, so he’ll surely remain a target machine in the Super Bowl.

It’s a testament to the star power of these groups that Beckham enters the big game on a relatively quiet note. His production has been far from quiet: since coming over midway through the year after a falling out in Cleveland, OBJ has thrived as a situational playmaker, including in the red zone. His sticky hands and acrobatic sideline footwork remain elite. The key is getting him involved early, which the Browns — and, previously, as his dazzling New York career fizzled out, the Giants — often failed to do. He was, remember, his generation’s version of Chase. The Super Bowl feels like the prime time for him to remind the world he’s still one of the game’s best athletes when given ample opportunity.

Drafted 24 spots after Higgins in 2020, the 25-year-old Jefferson hasn’t been nearly as involved since Beckham’s arrival in November, but his production has been starting-caliber regardless. Jefferson is built more for the prototypical slot or outside role manned by his two superiors on the depth chart, but McVay has deployed him more like a secondary downfield option as of late, much like veteran speedster DeSean Jackson, whose brief run with the team early this year ended just before Beckham arrived. The fact that Jefferson would’ve normally been No. 4 on the depth chart, if Week 1 starter Robert Woods hadn’t suffered a season-ending injury, is another example of these two teams’ talent.

Like Mike Thomas in Cincinnati, Skowronek is mostly just insurance at WR, with tight end Tyler Higbee playing a bigger role in the passing game. The rookie seventh-rounder has intriguing size (6-3, 224) but limited experience, perhaps best known for dropping a wide-open deep ball from Stafford in the Rams’ NFC Championship win. If Jefferson or Beckham were to go down, he’d be among the first emergency options on the outside.