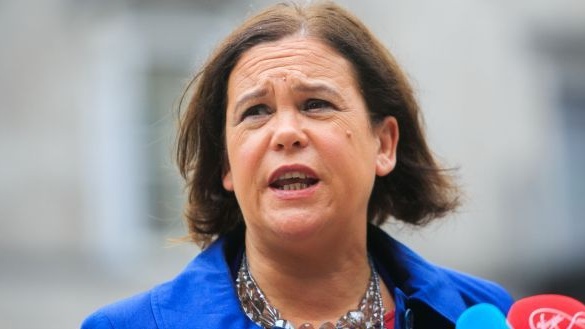 Sinn Féin has said the Government’s fuel cuts do not “go far enough” with the price per litre now as high as €2.20 at some filling stations.

A cut of 20c per litre on petrol and 15c on diesel from midnight has been agreed by Cabinet on Wednesday.

There will be 2c off marked, or green, diesel – a form of diesel used by farmers and others which is already subject to reduced tax.

“In many places the price per litre have now jumped as high as €2.20 so that means even following your proposed intervention, people will still wake up tomorrow and pay €2 per litre,” Ms McDonald told the Dáil during Leader’s Questions.

The Dublin Central TD said people couldn’t afford €2 per litre today and “they will not be able to afford it tomorrow”.

Ms McDonald called on the Government to “recalibrate” their intervention and that “half measures” wouldn’t work.

She said the financial resolution had to get petrol and diesel down to €1.75 per litre and “then to keep it there by further cuts in excise if necessary” as well as action on home heating oil.

Mr Martin said there couldn’t be further cuts because of the European Union energy tax directive which was now being looked at to see if there could be “greater flexibility”.

He claimed Ms McDonald was operating “on soundbite and not on substance”, telling her “you don’t do your homework”.

The Taoiseach said the Government had already set aside €800 million to respond to the energy crisis.

“We cannot cushion the entire blow to the public but we will do everything we can right across the board,” he added.

He also said he didn’t envisage rationing of oil and petrol but that departments were undertaking various scenario planning.

Social Democrats co-leader Róisín Shortall said the Government’s cuts in excise duty on fuel “brings us back to where we were two weeks ago”.

Ms Shortall called on the Government to “cap prices at a maximum level” and that “peace-time rules should not apply during war-time”.

Independent TD Verona Murphy said VAT was applied to excise at 23 per cent and the reductions on fuel costs were “the equivalent of a tax on tax”.

“I just can’t believe, to be fair Dick Turpin wore a mask when he robbed the people, but the Taoiseach can sit here bare faced and tell them [the public] that he has done something that he believes is going to save them,” she said.

“It’s time to be honest with the people Taoiseach and be transparent, this Government is adding tax on tax at a time when the most vulnerable and marginalised people in this country are choosing between heating and eating.”