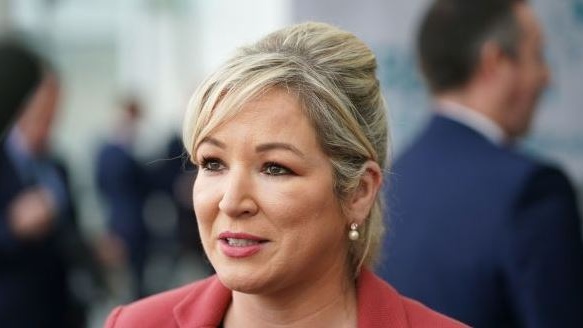 Sinn Féin remains on course to be the largest political party in the North, according to the campaign’s latest opinion poll.

With less than a week to go before the Assembly elections, a new Belfast Telegraph/LucidTalks poll shows support for Sinn Féin is sitting at 26 per cent – a six point lead over the Democratic Unionist Party (DUP).

The Sinn Féin position is unchanged from last month and, if secured on polling day, would lead to the appointment of the first ever nationalist head of government.

Although the new poll shows the Alliance party is down two percentage points to 14 per cent, it would still be on course to be the third largest party, tied with the Ulster Unionist Party (UUP) which is up two to the same figure.

Support for the Traditional Unionist Voice (TUV) remains unchanged at nine per cent – but if replicated on polling day that would a dramatic six per cent jump on its performance in the last election and could ensure it adds to its sole Assembly seat.

David McCann, deputy editor of the Northern Ireland political website Slugger O’Toole, said the DUP’s failure to close with gap with nationalist rivals so close to polling day highlighted the pressure they faced going into the election, whereas Sinn Féin has “recovered ground throughout its campaign”.

“The problem for the DUP at this stage is that there isn’t a lot of time to turn things round for them – so the only thing they can really hope for is that the polls are wrong.”

Meanwhile, the SDLP has not fared well in the latest polls, dropping one point to 10 per cent, People Before Profit is unchanged at two per cent, while the Green Party climbs one point to three per cent.

The only positive for the DUP is around gaining marginal seats through transfer votes, with the poll showing 74 per cent of those voting for the TUV plan to transfer to the DUP.

Those planning to transfer their votes from both the Alliance and Green parties say that they are most likely to transfer along nationalist lines.

Alliance, while dropping two points last month and vying with the UUP, have significantly increased their vote share since the 2017 Assembly election.

“Alliance is still up about five per cent on where they were five years ago – so they would still be on track to make gains of the back of that,” says Mr McCann.

“The Ulster Unionists are really just treading water, in terms of where they were from the last election. They haven’t really moved.”

The latest Lucidtalk poll was carried out online between April 22nd and 24th using its established online opinion panel, comprising of 13,816 members, which it states is balanced to be demographically representative of Northern Ireland.