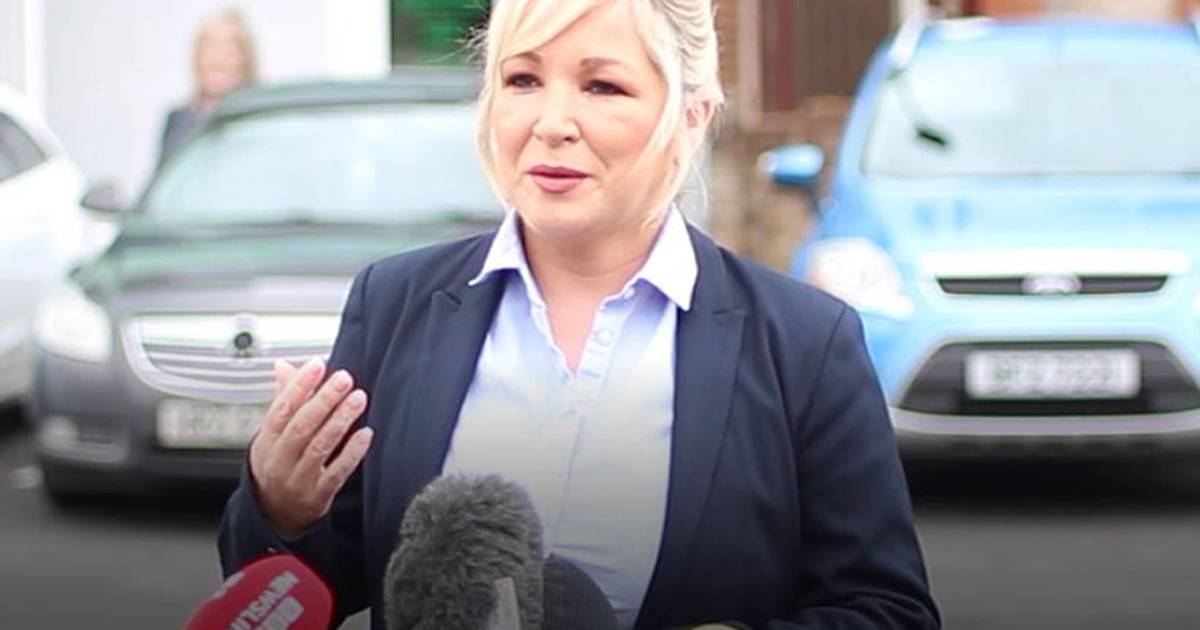 Sinn Féin Northern leader Michelle O’Neill has urged the new UK prime minister, Liz Truss, to “immediately work” on the restoration of Stormont to help those “struggling with rising costs”.

The First Minister designate has sought an urgent meeting with Ms Truss and called for a “change of tack from the British government”, accusing it of “pandering to the DUP” in relation to the Northern Ireland protocol.

Democratic Unionist Party (DUP) leader Jeffrey Donaldson confirmed he has written to Ms Truss but warned his party will only return to power-sharing when “decisive action” is taken on the post-Brexit trade deal.

Speaking in Stormont’s Great Hall on Monday following the announcement that Ms Truss had defeated Rishi Sunak in the Conservative Party leadership race, Ms O’Neill said: “Liz Truss now has an opportunity to come in and stop pandering to the DUP, stop pandering to that approach which is damaging our ability to be able to help people through the cost-of-living crisis.

“So I look towards an urgent meeting the new British prime minister but my point will be very clear to her, which is: that we need an Executive up and running now, we need the outcome of the election to be respected.

“. . . The majority of people here want to find ways to make the protocol work. The business community are crying out for stability. Triggering article 16 will not serve anyone well . . . Even at this late stage, Liz Truss has an opportunity to work with the EU, work with the Irish Government and find ways to reset relationships.”

She added that she had also written to Ms Truss seeking a “firm commitment” to break the Stormont deadlock.

The North has been without a functioning government since May’s Assembly election as the DUP, the North’s biggest unionist party, has boycotted its formation over its protocol concerns.

“The first task now for Liz Truss is to immediately work to restore the Executive and Assembly so we can help people who are struggling with rising costs,” Ms O’Neill said.

The controversial protocol Bill – introduced by Ms Truss when she was UK foreign secretary – has made a swift passage through the House of Commons and is now before the House of Lords. It will give ministers powers to scrap parts of the trade agreement.

Unionists are fiercely opposed to the protocol – the part of the Brexit withdrawal agreement that avoided a hard border on the island of Ireland by placing a customs and regulatory border in the Irish Sea – because they argue it has caused economic harm and undermined its constitutional position as an integral part of the UK.

Mr Donaldson said he has asked Ms Truss for the legislation to be progressed.

“Taking forward the Bill will provide a basis for a solution to deal with the protocol, to remove the barriers to trade between Northern Ireland and Great Britain, to fully restore Northern Ireland’s place within the UK internal market.

“So, in tackling the cost of living, the prime minister must continue to tackle the consequences of the protocol because we want to see that dealt with decisively.”

He added: “If there is to be renewed negotiation with the EU then the prime minister needs to be clear that for the institutions to be restored, decisive action is required to remove the barriers to trade and to respect the integrity of the UK internal market.”

Alliance Party leader Naomi Long criticised Ms Truss over her “pursuit of the protocol Bill” but said she now has a “window of opportunity” to put her stamp on the role.

“There will no doubt be concerns about Liz Truss becoming prime minister, given some of her actions to date. However, being new to the role, she can make a positive impact on Northern Ireland by engaging in sensible discussions with the EU around the protocol, and pursuing reforms to the Assembly and Executive in order to secure their return and future-proof both. That requires constructive leadership from Ms Truss.”

Ulster Unionist Party leader Doug Beattie called for “resolute plans” to be introduced by the UK government to tackle the protocol, which was contributing to a “toxic atmosphere in Northern Ireland politics”.

“We cannot afford to wait,” he said.

“There is a tidal wave of bad news coming over the horizon and strong political leadership will be required to steer Northern Ireland and the rest of the United Kingdom through what are generational challenges.”

SDLP Leader Colum Eastwood said there would be “no honeymoon period” for the new Conservative leader.

“The age of prime ministers dancing to the tune of the DUP must now be over. Sabre-rattling with the European Union must give way to honest dialogue in the interests of all our people.”