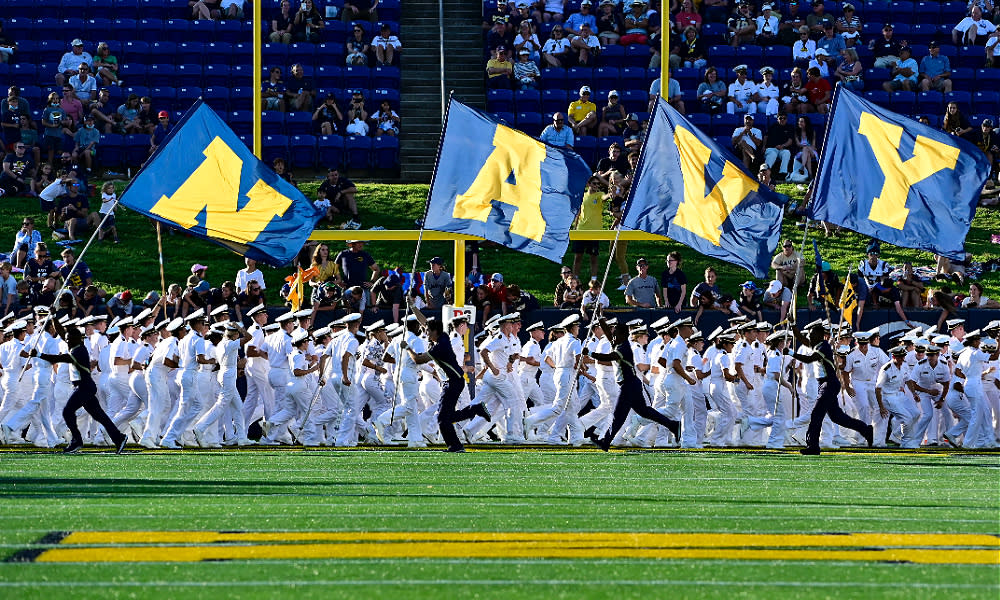 Navy Midshipmen Preview 2022: Previewing, predicting, and looking ahead to the Navy season with what you need to know and keys to the season.

… but they beat Army.

Navy is in a rut.

While Air Force and Army are rolling right along with winning seasons and bowl appearances, Navy is sputtering and coughing over the last two seasons going 7-15 since the great 11-2 2019 season.

Of course Ken Niumatalolo can coach, and of course this can all turn in a dime if the offensive system starts dominating again. Throw in the coming changes in the American Athletic Conference, and there’s a good chance Navy starts to win more and starts to look like it’s old self next year. But first, everything has to start working again and the team has to be a threat to come up with a winning season.

The offense can still control the clock, and the running game was ninth in America, and the defense even finished 34th in the nation and wasn’t bad. And yes, going 4-8 was awful, but four of the losses were by a touchdown or less, and …

Navy can play – there wasn’t a really bad loss among the eight last year – but being competitive isn’t enough. There’s enough in place to win a few more games and go bowling again, and beat Army, too.

The running game still came up with the yards. Yeah, it was able to get to 200 yards a game without a problem and it was able to hover around 300 yards on a regular basis, and it was able to control the clock, keep the turnovers to a minimum, and hit the really big downfield play when it did throw. But it wasn’t enough.

Navy only averaged 3.9 yards per carry and didn’t dominate on the ground as much as it needed to. Now it needs to improve with seven starters gone.

QB Tai Lavatai is a good-sized 6-2, 210-pounder who threw well – he hit 56% of his passes for 449 yards and five scores with the ability to hit the deep pass – and he ran for 371 yards and seven scores. The quarterback situation overall is fine, and a No. 1 receiver has to rise up.

It’s all relative – Mychal Cooper tied for the team lead with just 11 catches – but Jayden Umbarger and Mark Walker are veterans who’ll be fine. As always, as long as the wide receivers catch just one or two big passes a game – and block, they’re doing their job for a passing game that finished dead last in the country averaging 57 yards per game.

The tackles are set with Jamie Romo and Kip Franklin back, but the interior needs to be settled. It’s a smallish group outside of 307-pound Lirion Murtezi, and there has to be improvement along with the changes.

The top three rushers are done, and there isn’t a thumping fullback in place to replace leading ground gainer Isaac Ruoss or 230-pound James Harris.

It’ll be a quick backfield that will rotate all the smallish speedsters, and they’ll be fine as long as the O line does its job.

The defense is in better shape personnel-wise with six starters expected to be back. Last year’s bunch finished third in the AAC and was great against the run, but it has to force more takeaways and there needs to be some semblance of a pass rush.

Three of the top four tacklers are done, with the biggest hit at linebacker losing Diego Fagot. Tyler Fletcher is a young, productive hitter and John Marshall will work in the Striker role as the leading returning tackler – he made 53 stops last year – but the losing LB Johnny Hodges to TCU hurts.

The D that only came up with 16 sacks needs someone to be disruptive. Jacob Busic is a linebacker-sized end who made a few plays behind the line, and Clay Cromwell is a quick interior presence with 292-pound size to work around.

The secondary needs help from a pass rush. There were seven interceptions, but none over the last four games. Overall, the teams that could throw were able to do it on the Midshipmen. The corners are the big early concern, but Rayuan Lane and Evan Gibbons know what they’re doing at safety.

Navy Midshipmen: Key To The 2022 Offense

The running game has to be even better.

If you’re Arby’s, and your entire branding is about making roast beef sandwiches, then they had better rock.

Navy runs the ball as well or better than anyone in the country, but that’s all it does offensively. Being 8th in the nation in rushing was great, but the 3.9 yards per carry were by far the fewest of any of the top 62 rushing teams – no one else was under four.

Navy has to do what it does, only more.

Navy Midshipmen: Key To The 2022 Defense

Overall the defense was good and should be even better at times, but it needs to help the cause with more big plays, more takeaways, and more sacks.

There wasn’t a lot of pressure into the backfield – it was among the worst defenses in the nation in sacks and tackles for loss – and the lack of takeaways were a part of that.

Get closer to 20 and watch how the team’s overall fortunes rise up.

RB Anton Hall, Soph.
Or ANY of the options to step in at fullback.

One of the keys to all the service academy option attacks is a big, thumping fullback that establishes the inside to get the defense to take that one extra half-step lean between the hashmarks – and then comes that the pitch that busts wide open on the outside.

This Navy offense – at the moment – doesn’t have some 260-pound tone-setter who sends linebackers to the cold tub.

Hall, Logan Point, and Mike Mauai ware all decent-sized running backs, but they’re all under 200 pounds, unlike 220-pound Isaac Ruoss and 230-pound James Harris who combined for over 1,000 yards and seven scores last year.

LB Johnny Hodges, Sr.
Like we did for the other service academies, we reversed it. This is usually to highlight the star transfer coming in who’ll change things up, but since that’s not really how Navy works, here’s the guy transferring out who’ll hurt.

The 6-2, 228-pound Hodges was fifth on the team in tackles with 50 stops in just nine games. He’s just the type of active, quick veteran this linebacking corps could use, but he’s off to TCU.

Memphis, Sept. 10
Of course … Army, but what kind of a season is this going to be?

Navy showed against BYU to start 2020 and against Marshall and Air Force last year – losing those two by a combined score of 72-10 – that it wasn’t even close to ready. This year it starts things off against Delaware – not a breeze, but a should-be win – and then comes the conference opener against Memphis.

Navy has lost three in a row in the series and in four of the last five years. Win this, and the team should be 2-0 with a good week off to prepare for road games against East Carolina and Air Force. Lose, and the pressure is on to survive the first four games.

Navy Midshipmen Season Prediction, What Will Happen NEXT

It shouldn’t take that much to be just a little bit better with the running game, and a tad bit more disruptive with the defense, to get a few extra wins to bowling again.

The schedule isn’t a breeze. There are enough winnable games to keep this from being a disastrous year, but last year Navy needed to slip past UCF and Army in great upsets just to get to four wins.

It’s going to take a few big wins to get to six, but it should get close.

Delaware needs to be a win to open the season, and it’ll be impossible to get to six without getting past Tulsa and Temple at home. Notre Dame, at Cincinnati, and at UCF are close to forget-about-it losses unless something crazy happens, and the team doesn’t want to go into the Army game needing a sixth win to go bowling.

There has to be something funky happening somewhere – like winning at East Carolina and/or at home against Memphis – and even then Navy will be the big underdog in several games.

But if the offense starts to work like the 2019 version, this all changes fast.