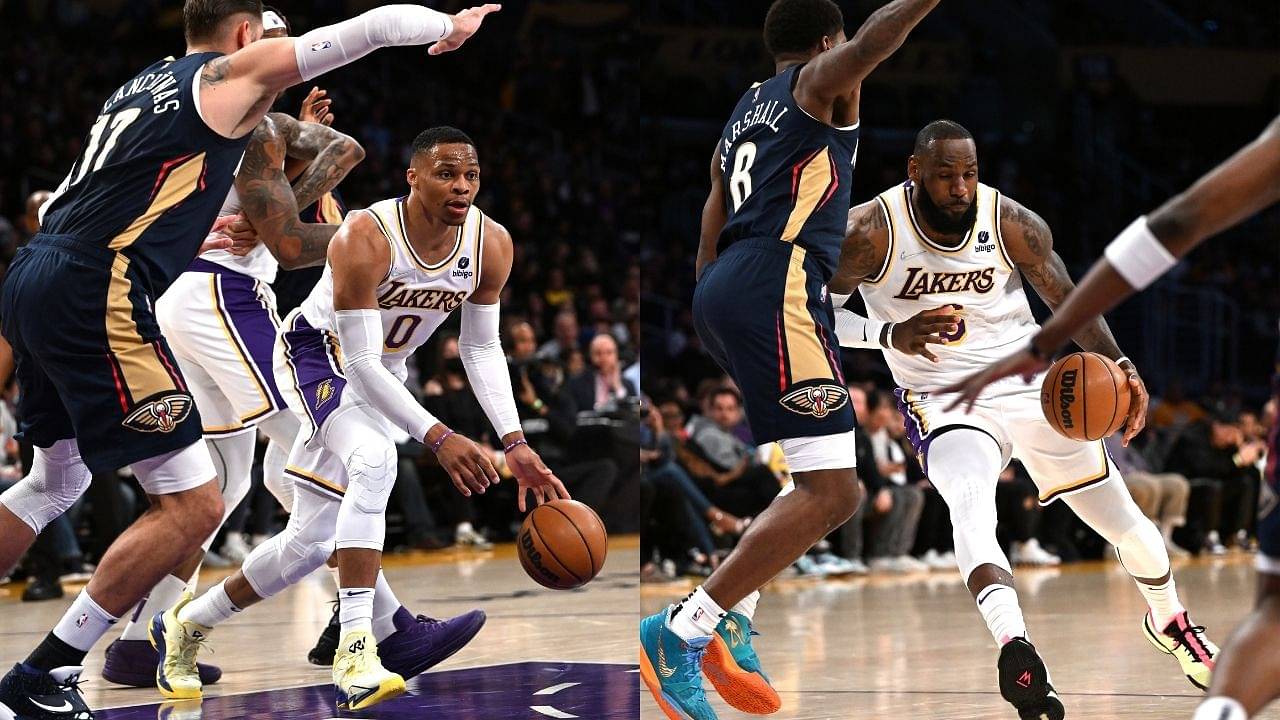 The Los Angeles Lakers are hosting the New Orleans Pelicans tonight. It has been one disastrous performance through three quarters till now. The 2020 NBA Champions seemed out of form from the tip-off itself. They are playing a very careless brand of basketball, and the same has been reflected on the box score.

In three quarters, the Lakers have turned the ball over 20 times already! This number already exceeds what most teams put for the entire game. This has clearly affected the rest of the game for the Lakers, as they’re down 95-65 at the end of the 3rd quarter. Russell Westbrook has 7 turnovers, whereas LeBron James has 6 of those. In addition to the same, the Lakers just have three players with double-digit scoring, with LeBron at 21, Russ at 15, and Carmelo Anthony at 11.

Also Read: “Unlike LeBron James, Luka Doncic was not afraid to get fouled!”: Skip Bayless finds a way to call out the Lakers superstar after Mavericks bounce back from a 21-point deficit against Warriors

On the other hand, the Pelicans are playing excellent team basketball. They have 5 players with double-digit scores, with Brandon Ingram and CJ McCollum leading the way.

The Los Angeles Lakers have been nothing short of terrible this season. Despite forming a ‘super-team’, they are on the 9th spot in the West and are 5 games under .500. LeBron James, who pushed to get Russell Westbrook to LA, now wants him gone. Skip Bayless took this chance to talk about the same.

As I kept saying when the LeBron pushed the Lakers to trade for Westbrick, he had led the NBA in turnovers four times and finished second in turnovers four more times. He is who he always was – camouflaged by averaging a triple double 4 of the last 5 seasons.

Skip did not miss a chance to slander the two for their shameful performance tonight.

Russ already has seven laughably bad turnovers – yet he’s complaining about an uncalled foul to refs who aren’t listening. Russ has unearned so much respect this season.

Russell Westbrick, leading the league in turnovers, just had 6 in the first half. Compounding the problem, LeBron had 5. Westbrick’s came because he’s as usual trying too hard. LeBron’s came because he isn’t really into it tonight.

Also Read: “Either I’m not 6’10 or Shaq is not 7’1, someone’s lying!”: Shareef O’Neal calls out his father for potentially lying about his 7-footer status

It is clear that the Lakers are in trouble if they cannot figure out how to play together. In all likeliness, their season would end during the play-in games. We can expect the Lakers to make some major roster changes this offseason, as they have been doing each year, for the past few years.