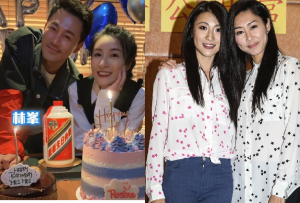 Nancy Appears Aloof, But Has a Warm Personality In Real Life

Rosina recalled that they had first met during 2014’s Starhub TVB Awards <星和無綫電視大獎> held in Singapore, where she was arranged to sit next to Nancy, who was then her senior in the industry. Influenced by Nancy’s positive vibes and open nature, Rosina recounts, “Seeing [Nancy] onscreen gives the impression that she is a very hardworking, dedicated artiste who wants to do everything well which might create a distant feeling, but she’s actually very warm in real life,”

While Rosina had attracted a lot of attention as “Raymond Lam’s maternal cousin” back then, Nancy did not let the label cloud her judgment of the actress. First having the impression of Rosina having a girly personality, Nancy got to know her a lot better as they filmed 2016’s The Short End of the Stick <公公出宮>, with the two eventually became good friends. She praises her as being a genuine person, “Rosina Lam [back then] is exactly the Rosina Lam that I know, who remains unchanged, up till now,”

“Even Friends May Hide Their Feelings”

Knowing each other for many years, the two friends claimed to have never fallen out before, but Rosina revealed once being “disappointed” by Nancy. She recounted how she had completed her make-up for the day’s event, and sat waiting for hours till the hairstylist finally appeared – but to her dismay Nancy suddenly instructed her assistant to get the hairstylist to help with other artistes’ hairdos. “Maybe she had no ill intention, but I had waited really long, so I felt really hurt at that moment,” Afterward, Rosina mentioned the day’s events to Nancy. “Because I didn’t have dinner at evening, it caused an acid reflux, once I started vomiting [I] couldn’t stop, [and even] had to board the plane on a wheelchair,”

Surprised that Rosina brought up her unhappiness in a rather direct manner, Nancy recalled being unaware of the episode, “I didn’t mean to, when she mentioned [the incident] I had no recollection…and actually didn’t know how things unfolded,”

Rosina attributed her forthrightness to her direct personality, “She confessed that she hadn’t expected me to be so honest about how I felt, because sometimes even friends might conceal their true feelings, but for me I’d directly express my unhappiness. Maybe cos I’ve a more independent streak, so when I encounter problems, I’d [digest] and handle them first, before verbalizing [my feelings].”