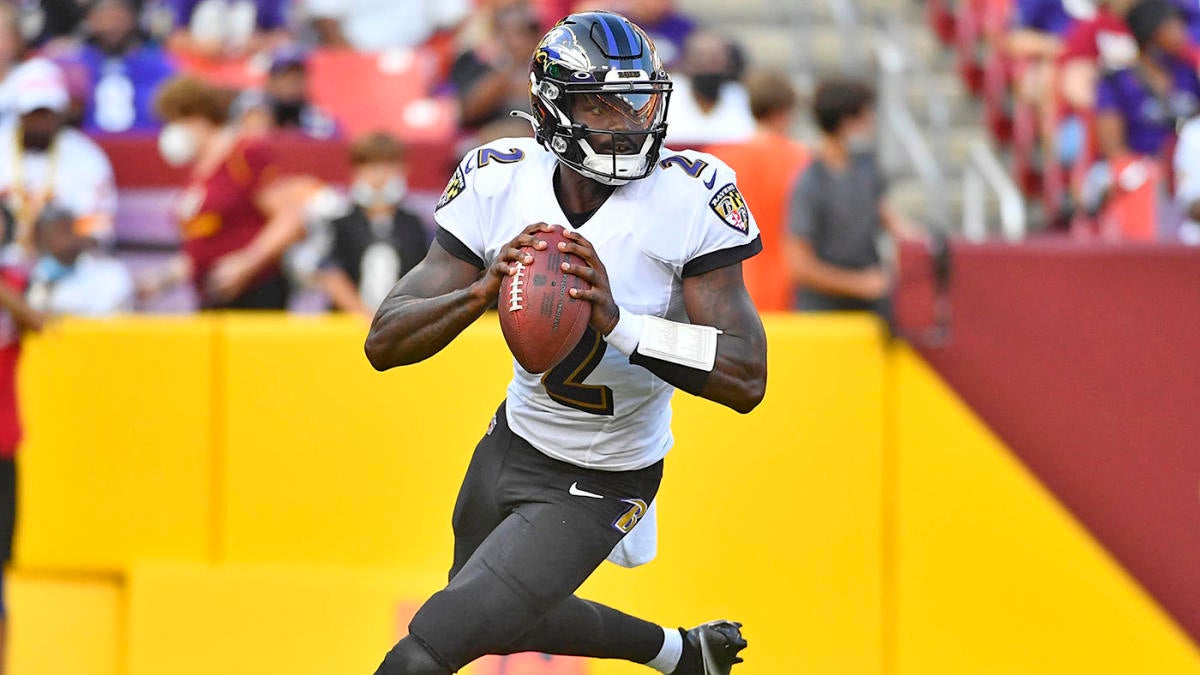 Tyler Huntley was one of six exclusive rights free agents the Baltimore Ravens tendered Wednesday. The Ravens also released cornerback Tavon Young, a 2016 fourth-round pick who made 24 starts over his four active seasons in Baltimore.

Along with Huntley, Baltimore tendered center Trystan Colon, long snapper Nick Moore, safety Geno Stone, linebacker Kristian Welch, and running back Ty’Son Williams. Based on each players’ length of NFL service, they will receive a one-year deal with the applicable league minimum salary ($705,000, $825,000 or $895,000), via The Baltimore Sun.

After barley playing during his rookie season, Huntley made four starts last season in relief of injured starter Lamar Jackson. He went 1-3 as Baltimore’s starting quarterback while completing 64.9% of his throws with three touchdowns and four interceptions. Huntley also ran for 294 yards and two touchdowns while averaging 6.3 yards per carry.

Huntley completed at least 70% of his passes in three games last season. In his first-career start, Huntley went 26 of 36 for 219 yards that included a game-winning drive in Baltimore’s 16-13 win in Chicago. On the game’s deciding play, Huntley — despite heavy pressure from Bears linebacker Robert Quinn — kept his poise before firing a 29-yard completion to Sammy Watkins that set up Justin Tucker’s game-winning field goal.

Three weeks later, Huntley entered the Ravens’ Week 14 road game against the Browns after Jackson went down with an ankle injury on the first play of the second quarter. With the Ravens already behind, 10-3, the Browns‘ lead swelled to 24-3 before Huntley directed four scoring drives while getting Baltimore within two points. Huntley, who finished the game with 270 yards passing and 45 more on the ground, capped off his performance with his first regular-season touchdown pass, an eight-yard toss to tight end Mark Andrews. The score was set up by Huntley’s 30-yard completion to rookie Rashod Bateman on fourth down on the previous play.

Huntley’s best performance may have come against the Packers one week later. In front of a nationally televised audience, Huntley scored four total touchdowns, completed 70% of his passes and nearly led Baltimore to an upset win over Green Bay.

Huntley’s success last season led to CBS Sports reporter Evan Washburn’s accurate prediction that the Ravens would make sure to keep Huntley in Baltimore this offseason.

“There’s no doubt that he’s got ability,” said Washburn, who had a front-row seat to Huntley’s progress this summer as a member of Baltimore’s preseason broadcasts. “He’s a confident, young player that just needs reps. I think his value in Baltimore is more than it would be on any of the 31 other teams. … What it allows this offense to do when Lamar either is removed from the game due to illness, injury, whatever it might be, they don’t have to change play calls. They don’t have to change the scheme.

“They’re not going to get the same amount of production; by no means is Tyler Huntley Lamar Jackson. But he can run the Lamar Jackson offense. And that is a luxury that not many teams have when it comes to their backup. … I think they will realize, especially after this season, he has some value [in Baltimore], and I’m sure they’ll take care of him. They’ve got to take care of Lamar first. That’s the major contract, then I’m sure Huntley will become a priority as well.”

While Huntley will stay in Baltimore, Young will hit the open market a week before the start of free agency. Young, who issued a classy farewell message upon his release, will likely have an active market given how many teams are looking to upgrade at cornerback this offseason.