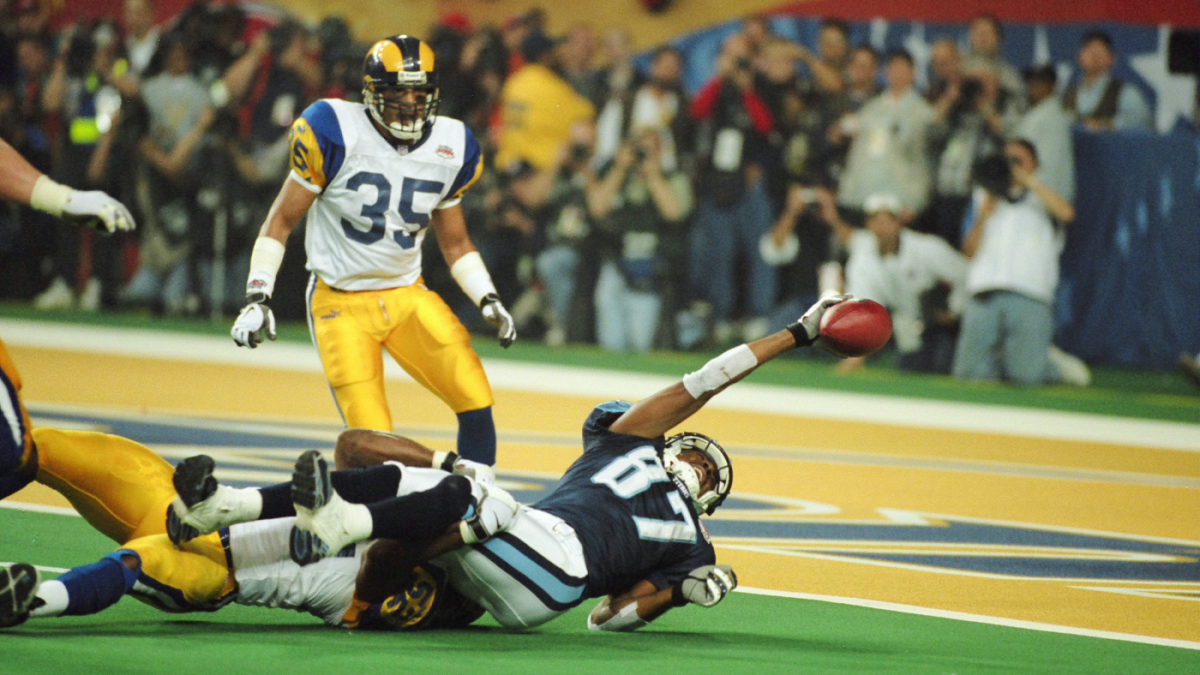 A funny thing happened during Super Bowl LV between the Buccaneers and the Chiefs. Fans and media members alike were surprised to see a Super Bowl that failed to live up to the pregame hype. That was a far cry from how things were two decades earlier, when the commercials often garnered more attention than the game itself.

While his last Super Bowl was a blowout, Tom Brady is largely to thank for the recent run of exciting Super Bowls. Of Brady’s 10 Super Bowl trips, seven weren’t decided until the game’s final minutes. He authored several game-winning, fourth-quarter comebacks, not to mention the only game-winning overtime drive in the history of the big game.

Brady’s place in Super Bowl lore is well-documented, but there have been several other Super Bowls that came down to the wire. With Super Bowl LVI on the horizon, we’ve decided to rank the greatest finishes in Super Bowl history.

The 35-minute power outage seemed to change the complexion of the game. Trailing 28-6 before the outage, the 49ers were a 2-point conversion away from tying the score with 10 minutes left. Down 34-29, they got down to the Ravens’ 5-yard line and were in position to win the game. As good as he was in leading the 49ers back, Colin Kaepernick was a little off on his fourth-down pass to Michael Crabtree that was slightly overthrown. The 49ers’ last-gasp attempt at a win was extinguished when Josh Bynes tackled Ted Ginn just short of midfield on the game’s final play.

File this under the “this would never happen in today’s NFL” category: Ahead 21-17 and facing a fourth-and-9 on the Cowboys’ 41-yard line with 1:28 left, Steelers coach Chuck Noll called a running play that gained 2 yards. Noll’s questionable decision was due to the struggles of his punter/kicker that day as well as the faith that he had in his defense. Noll’s faith was rewarded when safety Mike Wagner deflected Roger Staubach’s Hail Mary throw in the Steelers’ end zone on the game’s final play. The pass was plunked out of the air by fellow safety Glen Edwards, whose 35-yard return chewed up the remaining seconds on the game clock.

An eternal thorn in New England’s side, Eli Manning’s jaw-dropping, 38-yard completion to Mario Manningham with 3:46 left set up the Giants’ go-ahead touchdown. That was the height of this ending, however, given the fact that Ahmad Bradshaw literally stumbled into history as the Patriots allowed him to score in order to give Brady more time. Brady got close enough to launch a last-second Hail Mary into the Giants’ end zone. The ball was deflected before avoiding the outstretched arms of Rob Gronkowski.

People forget that the Eagles actually trailed in this game before taking the lead on Zach Ertz’s 11-yard touchdown pass from Nick Foles with 2:21 left. Philadelphia extended its lead to eight points with a field goal after Derek Barnett recovered Brandon Graham’s forced fumble of Tom Brady. Similar to Super Bowl XLVI, Brady was able to get the Patriots in position for a last-second heave into the end zone. With the entire city of Philadelphia holding its breath, Brady’s pass once again fell harmlessly to the turf, as Eagles fans could finally celebrate the franchise’s first Super Bowl win.

The first Super Bowl decided on a last-minute field goal, Jim O’Brien’s 32-yard boot gave the Colts the lead for good with five seconds left. Baltimore linebacker Mike Curtis’ interception with 1:09 left set up O’Brien’s game-winning kick. The ending made up for a sloppy game that included 11 turnovers.

A repeat of the Patriots’ first Super Bowl win two years earlier. This one had a little less suspense, however, given that we had already seen Brady pull off a last-minute, game-winning drive in the Super Bowl. A second Vinatieri game-winning kick appeared to be inevitable when Panthers kicker John Kasay booted his kickoff out of bounds — giving Brady a short field to work with — after Carolina had tied the score with 1:08 left. Three completions to Troy Brown and a 17-yard completion from Brady to Deion Branch set up Vinatieri’s 41-yard boot with four seconds remaining.

While the ending was a bit anticlimactic, this was one of the best fourth quarters in Super Bowl history, as a record 37 points were scored during the game’s final 15 minutes.

In a back-and-forth battle, the Broncos took the lead for good after the Packers intentionally allowed Denver to score with 1:47 left. Brett Favre quickly drove the defending champions into Broncos territory before he misfired on two straight passes. Facing a fourth-and-6 on the Broncos’ 31, Favre’s final pass was batted down by Broncos linebacker John Mobley, as the Broncos took over on downs with 28 seconds left. John Elway won his first ring, while Terrell Davis won MVP honors after rushing for 157 yards and three touchdowns on 30 carries. The Broncos’ win snapped the NFC’s 13-game Super Bowl winning streak.

The Patriots forced overtime after completing a 91-yard scoring drive with a minute left in regulation. Down 28-3 midway through the third quarter, New England tied it when James White scored from a yard out. The game officially went to overtime after Matt Ryan was unable to connect with Austin Hooper on a deep third-down pass with 11 seconds left.

Because of Brady and the Patriots’ history, along with what had just transpired over the course of the second half, there wasn’t much suspense left when the Patriots won the overtime toss. Like a thief in broad daylight, the Patriots stole the game and the Falcons’ hearts on the first drive of overtime. New England’s highly efficient drive — which took less than four minutes — ended with White’s 2-yard touchdown run. Brady surpassed Joe Montana and Terry Bradshaw as the winningest quarterback in Super Bowl annals.

Trailing 16-13, the 49ers successfully marched 92 yards in 11 plays during the game’s final three minutes. Game MVP Jerry Rice caught three of his 11 receptions on the drive, but he was used as a decoy on Joe Montana’s game-winning touchdown pass to John Taylor with 34 seconds left. A short completion, a sack and two incomplete passes on the Bengals’ ensuing drive clinched the 49ers’ third Super Bowl win of the ’80s in what was the final game of Hall of Fame coach Bill Walsh’s career.

Down 17-3, the Rams scored two late touchdowns and appeared to be on their way to forcing overtime. But Warner and the Rams’ offense never got the ball back after Tom Brady set up Adam Vinatieri’s game-winning, 48-yard field goal as time expired. Brady completed five of his first seven passes on the drive that included a key 23-yard hookup with Troy Brown that got the Patriots into Rams territory. Vinatieri then recorded the first walk-off field goal in Super Bowl history.

The first Super Bowl where the winner or loser would be determined by a field goal attempt. Fortunately for the Giants, Scott Norwood’s 47-yard attempt was wide right, preserving the smallest margin of victory in Super Bowl history. The Bills had driven 61 yards in eight plays prior to Norwood’s miss with eight seconds left. The majority of those yards were gained by Bills running back Thurman Thomas, who tallied 190 all-purpose yards in a losing effort.

Pittsburgh appeared to have this game in the bag until two Larry Fitzgerald touchdowns (the second one coming on a 64-yard play) gave Arizona a 23-20 lead with 2:37 left. Backed up on his own 12-yard line, Ben Roethlisberger got the drive going with a 14-yard completion to Nate Washington on first-and-20. His completion to Santonio Holmes two plays later kept the drive alive, while his 40-yard completion to Holmes three plays later put the Steelers in position for a game-winning score.

Roethlisberger and Holmes then connected on one of the most incredible plays in Super Bowl history. After buying time for what seemed like an eternity, Roethlisberger fired a high pass that was snared by Holmes in the back corner of the end zone. Holmes was somehow able to get parts of both feet inbounds while securing the catch. With 29 seconds left, Kurt Warner completed two passes to get the Cardinals past midfield. Arizona wouldn’t get a chance at a Hail Mary, however, as LaMarr Woodley strip-sacked Warner just as he was about to throw. The game ended with Roethlisberger taking a knee while securing the Steelers’ sixth Super Bowl win.

This finish was really wild. One play after the Titans tied the score, the Rams took the lead back on Kurt Warner’s 73-yard touchdown pass to Isaac Bruce. The resilient Titans then marched from their own 12 to the Rams’ 10-yard line in the game’s final two minutes. On the game’s final play, Titans quarterback Steve McNair — who somehow managed to break two tackles before firing a 16-yard completion on the previous play — hit receiver Kevin Dyson on a slant pass. Dyson initially looked like he was on his way in for the potential game-tying score before Rams linebacker Mike Jones — who turned his head around just as McNair released his pass — stopped Dyson 1 yard short of the goal line.

Quite possibly his most under-appreciated Super Bowl, Tom Brady’s two fourth-quarter touchdown passes gave the Patriots a four-point lead. Russell Wilson kept the defending champions alive with a head-scratching 33-yard completion to Jermaine Kearse that initially looked like an incomplete pass. But then Seahawks coach Pete Carroll made an equally head-scratching play call by electing to throw from the 1-yard line instead of handing the ball off to Marshawn Lynch. Seattle fans are still mourning that decision, as Wilson’s pass was picked off by Malcolm Butler with 26 seconds left. The pick sealed the Patriots’ first Super Bowl win in a decade.

The most action-packed final 75 seconds in Super Bowl history. It started with Eli Manning’s jaw-dropping, 32-yard completion to David Tyree who caught the ball while using the side of his helmet. Manning then gave the Giants a stunning 17-14 lead when he hit Plaxico Burress in the end zone with 39 seconds left.

The Patriots were not done yet, however, as Brady and Randy Moss nearly connected on a desperation fourth-down deep pass that would have given New England the ball in field goal range with two seconds left. Brady, who threw the ball roughly 85 yards on the play, just missed connecting with Moss, as the Giants took over on downs with one second left. New England fell painfully short of becoming the first 19-0 team in NFL history.