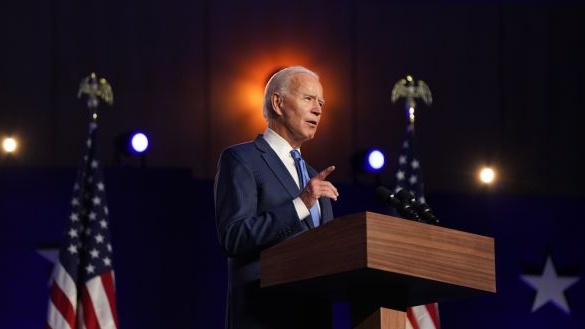 Joe Biden will vow to make Vladimir Putin “pay a price” for Russia’s invasion of Ukraine in his first State of the Union address.

Mr Biden planned in his remarks to highlight the bravery of Ukrainian defenders and the resolve of a newly reinvigorated Western alliance that has worked to rearm the Ukrainian military and cripple Russia’s economy through sanctions. He is set to deliver an ominous warning that without consequences, Russian President Putin’s aggression would not be contained to Ukraine and that his “war was premeditated and unprovoked.”

“Throughout our history we’ve learned this lesson — when dictators do not pay a price for their aggression, they cause more chaos,” Mr Biden is to say, according to advance excerpts released by the White House. “They keep moving. And, the costs and threats to America and the world keep rising.”

Even before the Russian invasion sent energy costs skyrocketing, prices for American families had been rising, and the Covid-19 pandemic continues to hurt families and the country’s economy.

Mr Biden planned to outline plans to address inflation by reinvesting in American manufacturing capacity, speeding supply chains and reducing the burden of childcare and eldercare on workers.

Set against disquiet at home and danger abroad, the White House had conceived Tuesday night’s speech as an opportunity to highlight the improving coronavirus outlook, rebrand Mr Biden’s domestic policy priorities and show a path to lower costs for families grappling with soaring inflation. But it has taken on new significance with last week’s Russian invasion of Ukraine and nuclear sabre-rattling by Mr Putin.

Mr Biden will address a mask-optional crowd in the House chamber, one sign of the easing coronavirus threat. But he will also speak from within a newly fenced Capitol due to renewed security concerns after last year’s insurrection. Rising energy prices as a result of Russia’s war in Ukraine risk exacerbating inflation in the US, which is already at the highest level in 40 years, eating into people’s earnings and threatening the economic recovery from the pandemic. And while the geopolitical crisis in Eastern Europe may have helped to cool partisan tensions in Washington, it cannot erase the political and cultural discord that is casting doubt on Biden’s ability to deliver on his pledge to promote national unity.

Mr Biden is speaking to an American public that is frustrated with his performance. A February AP-NORC poll found that more people disapproved than approved of how Mr Biden is handling his job, 55% to 44%. That is down from a 60% favourable rating last July. White House officials acknowledge the mood of the country is “sour,” citing the lingering pandemic and inflation.

Mr Biden, in his speech, will highlight progress from a year ago — with the majority of the US population now vaccinated and millions more people at work — but also acknowledge that the job is not yet done, a recognition of American discontent.

Mr Biden aides say they believe the national psyche is a “trailing indicator” that will improve with time. But time is running short for the president, who needs to salvage his first-term agenda to revive the political fortunes of his party before November’s midterm elections. – Associated Press