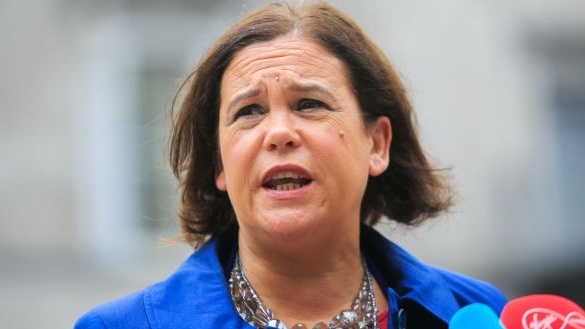 Opposition leaders called for the expulsion of Russian ambassador to Ireland Yury Filatov during Ukrainian president Volodymyr Zelenskiy’s address to the Houses of the Oireachtas on Wednesday.

Sinn Féin leader Mary Lou McDonald said it was “long past time” for Mr Filatov to be expelled from Ireland.

“All the while, however, the Russian embassy in Ireland and ambassador Yury Filatov have acted as unwavering and unapologetic propagandists for his country’s illegal invasion of Ukraine, ” said Ms McDonald.

“Yesterday, in the face of evidence of Russian war crimes in Bucha and other areas surrounding Kyiv, the embassy and the ambassador claimed that this evidence was fabricated. They described it as another stage of the disinformation war against Russia.

“This shameful response demonstrates the depths to which the Putin regime will stoop to justify the savagery of Russia’s military aggression. The Russian ambassador wants us to ignore the evidence before our very eyes.”

Ms Mc Donald commended Lithuania on becoming the first EU member state to expel its Russian ambassador and said Ireland should “follow suit”, adding it would be “a most powerful action for us to take as a militarily neutral, non-aligned State as we too stand for human rights and justice”.

Labour leader Ivana Bacik said stronger measures against Russia were needed and noted that Mr Zelenskiy had “told us that our leadership can make a difference”.

“We are calling now for the expulsion of the Russian ambassador from Ireland as he continues to mount brazen denials of the truth of what is happening in Ukraine and what his government are doing to the people of Ukraine,” said Ms Bacik.

The Dublin Bay South TD said Russian president Vladimir Putin had shown “he wants to wipe Ukraine off the map”.

“He wants to abolish Ukraine’s culture and its history. Putin must fail and will fail,” she said.

People Before Profit TD Richard Boyd Barrett said the “barbaric invasion” by Mr Putin should be condemned and refuge should be extended to those fleeing war.

“However, we feel duty-bound to say that we reject completely attempts by some in the Government and some commentators to suggest that the crisis in Ukraine is a reason to abandon or weaken Ireland’s military neutrality or move closer to the Nato military alliance,” said Mr Boyd Barrett.

“We reject completely any idea that Nato involvement or escalation of this war would be anything other than a disaster that would threaten a wider European war or even a nuclear conflict.”

“While Russia is starved of economic support, financial support from the international community must flow into Ukraine,” said Ms Murphy.

“What Putin has destroyed, Ukraine’s allies must help to rebuild. Humanitarian relief and support for the unprecedented number of refugees fleeing the war must also be sustained, unwavering.”