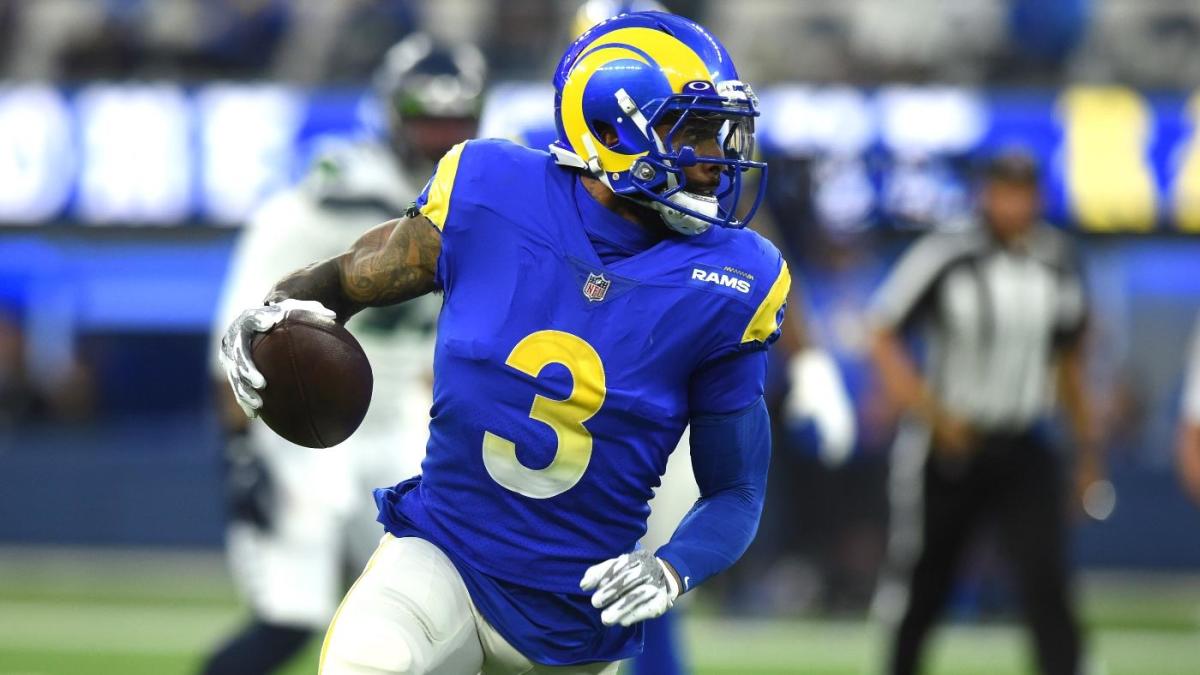 For a minute there, it looked like Odell Beckham Jr.’s 2021 season was going to end in disarray. The veteran receiver started the year with the Cleveland Browns and ultimately had a falling out with the organization, which included Beckham’s father publicly criticizing quarterback Baker Mayfield. That contributed to Beckham’s eventual release in early November and he quickly found a new home in Los Angeles with the Rams. There, Beckham enjoyed a resurgence as he instantly formed a connection with Matthew Stafford and proved to be a key cog as the Rams marched to a Super Bowl LVI victory over the Cincinnati Bengals.

Upon joining the Rams, Beckham totaled 27 catches for 305 yards and five touchdowns in eight regular-season games. He was even more efficient in Los Angeles’ four playoff games, catching 21 of his 26 targets for 288 yards and two touchdowns. In Super Bowl LVI, Beckham looked like he was on his way to an MVP-caliber performance catching two passes for 52 yards and a touchdown, but suffered a knee injury that forced him out of the game and was later revealed to be a torn ACL.

As Beckham looks toward unrestricted free agency next week, that knee injury is expected to be a major factor given that he likely will miss a sizable amount of the 2022 season. That said, teams will still likely be very interested in adding a dynamic talent to the roster for the late-season push, making him one of the more intriguing free agents to hit the market this offseason.

While we wait to see what Beckham plans to do next in his career, let this post be your hub for everything revolving around the wide receiver. Below, you’ll find potential landing spots, a look at his projected contract, and a nugget-by-nugget news rundown of all the latest developments.

The Rams will likely be looking to bring as many pieces back from their Super Bowl-championship team as they can, which includes Beckham. There was no denying that he and Stafford had instant chemistry and Beckham remaining in a comfortable system with a quarterback he’s had success with as he continues to rehab should be a big motivator in trying to stay with the Rams. Meanwhile, Los Angeles has shown interest in keeping Beckham and could get him on a team-friendly deal given this latest injury.

The Patriots were rumored to be one of the teams trying to land Beckham when he was released from the Browns in the middle of the season. If for some reason the Rams are unable to or decline to re-sign him, Bill Belichick could once again try to ink the talented receiver to a deal. If Beckham’s market is sunk due to his torn ACL, it could become even more appealing for Belichick, who is always searching for value on the open market. New England is also in major need of a talent boost at the receiver position and a healthy Beckham would be an ideal top option for second-year quarterback Mac Jones.

Green Bay was another team that tried to land Beckham during his brief free agent run in the midst of last season, but ultimately fell short. With Aaron Rodgers back with the organization and Davante Adams on the franchise tag, a one-year stint with the Packers to help them get over the hump in the NFC wouldn’t be the worst place to play. Similar to the Rams, he’d be playing opposite of one of the best receivers in the league in Adams and would have an elite quarterback in Rodgers throwing to him. Green Bay also would be an ideal landing spot because the team likely wouldn’t need him until the playoff push, so he could rehab his knee without the urgency to hit the field as soon as possible.

After being released by the Browns in early November, Beckham inked a one-year deal with the Rams that paid him just $1.25 million for the second half of the season. According to Spotrac’s market value calculations, Beckham is now projected to fetch a contract that pays him an average annual salary of $13.1 million over two seasons. Of course, it remains to be seen how much Beckham’s torn ACL impacts his market, and the receiver could look to sign a short one-year deal to possibly hit the open market again next year in a healthier position.

When a player is saying he’s willing to take a hometown discount and the head coach of that team is publicly saying that he wants the player to return, that’s a formula for OBJ staying put in Los Angeles. The pairing was simply too seamless for either side to look elsewhere this offseason. While Beckham may not be around for the first half of the year due to the ACL recovery, the Rams have plenty of weapons to hold down the fort until he’s able to hit the field. As long as Los Angeles can put a respectable below-market deal in front of Beckham, it’s hard seeing him play anywhere else in 2022.

March 4: Rams head coach Sean McVay isn’t hiding his desire to keep Beckham in L.A. for the team’s title defense in 2022, despite the receiver likely missing a chunk of the campaign due to his torn ACL.

“We definitely want to be able to get Odell back,” McVay said during an appearance on Sirius XM’s Mad Dog Sports Radio. “I also know that there’s gonna be some other teams that probably want his services, but hopefully we’ll be able to convince him to come back and be a part of this thing.”

Feb 11: Beckham told NFL.com that his preference would be to remain in Los Angeles and re-sign with the Rams when he hits free agency later this offseason. The veteran receiver also said that he would be open to giving the team a hometown discount.

“This place, it feels good in my heart,” Beckham said, per Nick Shook. “It feels like a home.”