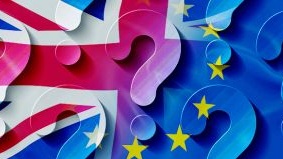 He made the remarks after attending an anti-protocol rally hosted by the Orange Order in Dromore, Co Down. The rally also featured TUV leader Jim Allister alongside Baroness Kate Hoey and former Brexit Party MEP Ben Habib. Baroness Hoey and Mr Habib were among lead applicants in a judicial review against the legality of the protocol.

“The Irish Sea border represents the single greatest threat to Northern Ireland’s place in the United Kingdom in a generation. The presence of trade barriers within our own country has the grave potential to succeed where decades of terrorism failed, by driving an irrevocable wedge between Northern Ireland and other parts of the UK,” said Mr Donaldson.

“The EU say one of the primary purposes of the protocol is to protect the political institutions created by the Belfast/Good Friday Agreement. Yet the protocol is in fact destabilising those institutions, with both the North-South Ministerial Council and the Executive no longer fully functioning. If the EU really care about political stability in Northern Ireland, then they should act immediately to resolve the problems created by the protocol,” he added.

The DUP leader said he wants to build a better Northern Ireland, tackle waiting lists and the cost of living while giving young people more and better opportunities in life.

“However, instead of being able to focus on those key issues the protocol is draining our economy of £2.5 million every day. That’s only part of its full devastation, with the number of grace periods reaching double figures and £500 million government support due to come to an end. This situation cannot go on,” said Mr Donaldson.

The protocol prevented a hard border on the island of Ireland after Brexit, but is deeply unpopular with unionists because it introduced new trade barriers in the Irish Sea between Northern Ireland and the rest of the UK.

While the EU has given concessions on its operation, notably to ease the flow of medicines, these have not satisfied many who oppose it.

It followed a unilateral move by DUP Minister for Agriculture Edwin Poots to stop protocol agri-food checks on goods arriving from Great Britain.

Mr Allister told the rally the protocol is “incompatible” with Northern Ireland’s position within the UK.

“No unionist worthy of the name can ever accept or implement it. Its economic mischief is dire, but its constitutional mischief is terminal to the union. Its clear purpose is to build Irish unity through the stepping stone of an all-island economy, whereby Northern Ireland’s alignment to and affiliation with GB is broken and the Irish unification anticipated in the Belfast Agreement is achieved. That is why I have always said, unionists either kill the protocol or it will kill the union,” said Mr Allister.

“This protocol is irredeemable. Any tinkering which leaves us in any way in a foreign single market for goods, under a foreign customs code and VAT regime, all subject to foreign laws and a foreign court, can never be made acceptable or rendered constitutionally viable.” – PA