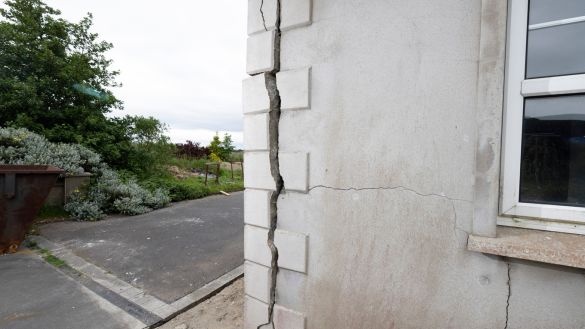 A new system of calculating grants for Mica homeowners will be considered by Government as a controversial sliding scale looks set to be dropped.

The Cabinet last year approved an enhanced scheme to cover repairs or rebuilding for an estimated 7,500 homes in Donegal and Mayo.

The Mica Action Group along with Opposition politicians called for the sliding scale to be dropped amid claims that it would mean that homeowners would not get 100 per cent redress and will have to contribute tens of thousands of euro to rebuilding their houses. Government backbenchers also raised concerns.

A new model proposed by the Society of Chartered Surveyors Ireland (SCSI) will instead see payments made based on eight different types of houses.

This ranges from a two bed terraced estate house to a five-plus bedroom rural house.

The Minister for Housing Darragh O’Brien will likely adopt the measures suggested by the SCSI when they submit their report before February 28th.

Homeowners have also raised concerns about the inclusion of new foundations in the scheme if they are needed, as well as concerns that the scheme will only cover the cost of restoring houses to pre-2007 building standards.

In a letter sent to campaign groups, Mr O’Brien said that the foundations issue is being considered as part of the review by the National Standards Authority of Ireland.

On the building standards, Mr O’Brien wrote that the scheme is a “like for like” remediation grant.

“Homeowners will also be eligible for the newly revised SEAI retrofit grants. I am working with my colleague Minister Eamon Ryan to ensure this process can be streamlined for defective concrete block scheme applicants.”

Mr O’Brien said that the legislation to introduce the scheme should be published next month. The Government’s intention is to have it up and running before the summer.

“My office has been directly engaging with the Attorney General to accelerate the publication of a Defective Concrete Block Scheme bill next month. I am eager to pass this legislation to give effect to the €2.2bn scheme as soon as possible,” Mr O’Brien wrote.

“I understand the level of anxiety and apprehension around the scheme given the scale involved and homeowner’s experiences of the devastation cussed by Mica.”

“The SCSI is providing a valuable independent real cost report to provide clarity and certainty for homeowners based on best real cost data available.”

“Construction costs within the SCSI report will be reviewed annually to reflect any changes the real cost of construction. The SCSI has advised the department that they do not produce sliding scales in their construction costs reports. I believe the final report will provide welcome clarity and certainty for homeowners by ensuring the cost levels in the grant scheme reflect the best data available as set out by the SCSI.”