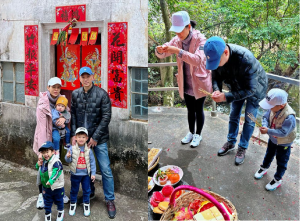 Busy working in China in recent years, Myolie Wu (胡杏兒) has since returned to Hong Kong earlier to reunite with husband Philip Lee (李乘德) and their three sons for the annual Lunar New Year celebrations, which fell on February 1 this year.

Just before the arrival of the Year of the Tiger, the Lees returned to Philip’s hometown – the rural Hakka village of Sha Tau Kok, also Hong Kong’s northernmost town – where they did some spring cleaning, paid respects to their ancestors and to thank “protective guardians” who kept the family safe throughout the previous year.

Wishing everyone great health, happiness and success in the new year, Philip shared photos of the trip, including of himself putting up traditional red Chinese couplets at their home’s entrance, along with a bunch of “prosperity chives.” With Brendan following along, the couple paid their respects to family ancestors by offering joss sticks according to custom.

Sharing another tradition, Philip also dropped by the village stream to collect a special species of grass, which is used for bathing and cleansing the body of any evil before welcoming the new year.

Myolie Wu: “My Ex Made Me More Mature; My Hubby Pampers Me Like A Child”