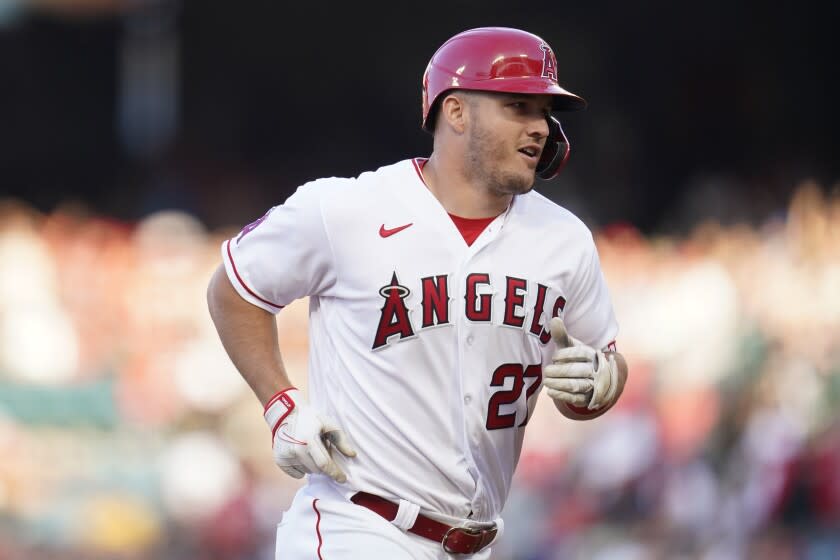 Mike Trout and Tim Anderson both vividly remember what getting drafted was like. So does Major League Baseball.

On Friday, the league’s main channel, MLB Network, plans to unveil special MLB draft spots highlighting the two players’ experiences in an effort to bring more attention to the event and a new pool of hopeful amateurs.

“Baseball is a true amateur draft in that amateur meaning in sport, no one knows who our players are most of the time,” said Harold Reynolds, a former player and longtime draft analyst at MLB Network.

He also said the spots were about reminding prospects that the draft is their day.

Trout, who was born in Vineland, N.J., was able to hear his name called in person at MLB Networks’ first live broadcast of the draft, which was held in Secaucus, N.J., in 2009. Taken 25th by the Angels, he still gets goosebumps thinking about it.

“It kind of reminds you where you came from,” Trout told The Times. “Going back and getting drafted out of a small town in southern New Jersey and having an opportunity to go to the MLB Network for the draft, I think it was a great experience. Looking back, it was the best decision I ever made. I think you always have that doubt if you’re gonna get drafted or not. … I think being able to go there and see everything, see how it all develops, see how it all plays out. I think it’s special.”

Reynolds was one of the visionaries of the MLB Network draft spots. He explained that Trout was picked for the promo because he is the best player in baseball and because “he’s a shining example for why to go to the draft.”

After Trout, other notables who attended their drafts, along with the Chicago White Sox’s Anderson, include the New York Yankees’ Aaron Judge, the Minnesota Twins’ Carlos Correa and the New York Mets’ Dominic Smith.

Reynold’s reason for wanting to include Anderson in the special media spot, he said, was that the All-Star shortstop “is the new wave,” the new generation of players who aren’t afraid to just be themselves.

“It was definitely a cool moment in my career, obviously to begin my professional career and put me in a better position to provide for my family. So, yeah, that day’s gonna always stick with me,” Anderson said while the White Sox were in Anaheim this week. Chicago picked Anderson at No. 17 overall in 2013.

“I’ll always remember that day. It was the day that I was able to tap into, I guess you could say, my purpose.”

MLB Network will broadcast the first 80 picks at L.A. Live on July 17 at 4 p.m. Pacific time. Fans can attend for free.