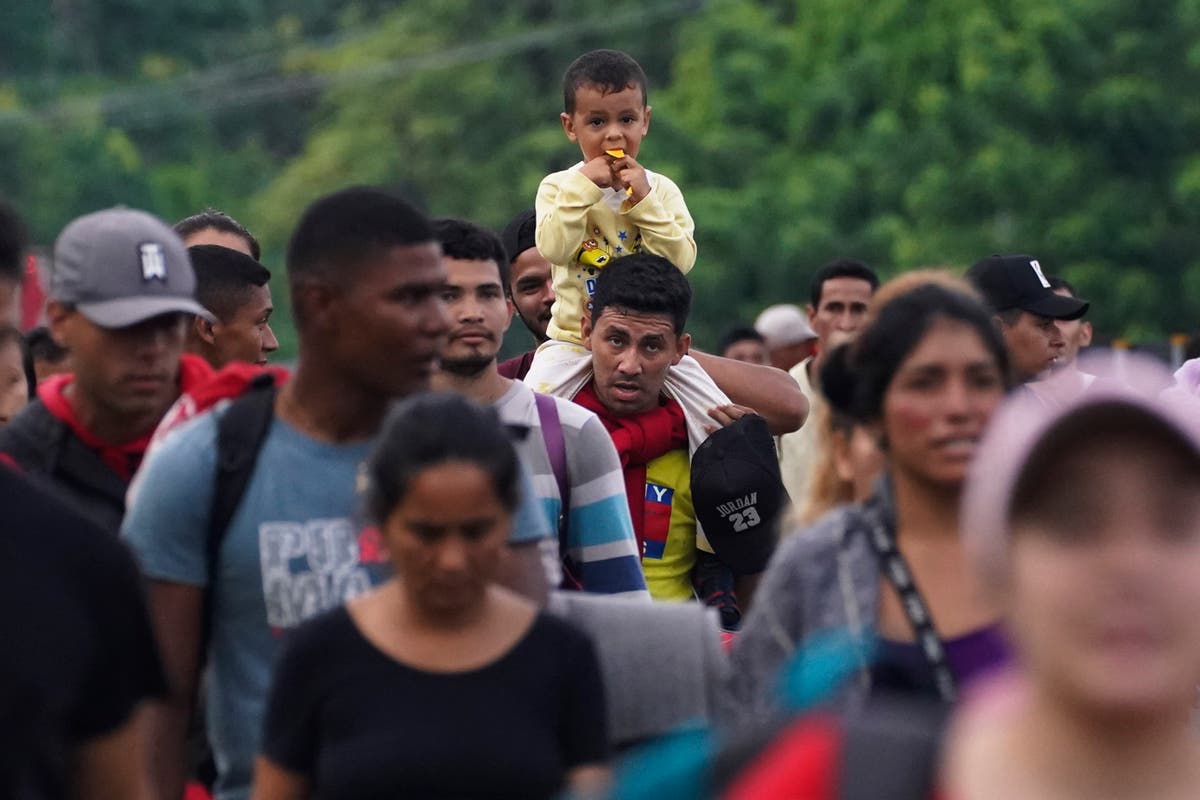 Migration has taken center stage at an assembly of Western Hemisphere leaders, reflecting its emergence as a top foreign policy issue amid red-carpet drama over who comes and who stays home.

The “Los Angeles Declaration,” to be announced while U.S. President Joe Biden meets with his counterparts from North, Central and South America Wednesday through Friday, is expected .to be a brief call to action that supporters hope will guide countries on hosting people fleeing violence and persecution and searching for more economic stability.

The United States has been the most popular destination for asylum-seekers since 2017, posing a challenge that has stumped Biden and his immediate predecessors, Donald Trump and Barack Obama.

But the U.S. is far from alone. Colombia and neighboring South American countries host millions who have fled Venezuela. Mexico fielded more than 130,000 asylum applications last year, many of them Haitians, which was triple from 2020. Many Nicaraguans escape to Costa Rica, while displaced Venezuelans account for about one-sixth the population of tiny Aruba.

“Countries are already having to do this, so rather than each country trying to sort this out and figure it out for themselves, what we’re doing is saying, ‘Let’s come together in a coherent way and construct a framework so we can all work together to make this situation more humane and more manageable,’” said Brian Nichols, assistant U.S. secretary of state for Western Hemisphere affairs.

Biden was scheduled to arrive at the summit Wednesday, trailed by questions about how much progress he can make on migration and other issues when some of his counterparts from the region — most notably Mexican President Andrés Manuel López Obrador — are boycotting the event.

The controversy has undermined the start of the summit, which is being hosted by the U.S. for the first time since the inaugural event in 1994, at a time when China has been trying to make inroads in the region.

Although Biden was heavily involved in Latin America while he was vice president, his focus has largely been elsewhere since taking office as president last year. He’s been trying to reorient U.S. foreign policy toward Asia while also rallying allies to punish Russia for its invasion of Ukraine.

Some concrete measures may be announced, perhaps funding for development banks. Nichols said in an interview Monday that discussing any specific initiatives would be premature, but officials have made clear that the agreement will be largely aspirational.

There is widespread agreement that relief must target growth and stability for entire communities in which migrants live, not just migrants.

“If you only help the migrants and not the communities around them, that’s counterproductive,” Nichols said.

The agreement may call for more pathways to legal status, mechanisms to reunite families, more efficient and humane border controls and improved information sharing, according to experts who have seen early drafts.

Leaders of Mexico, Guatemala, Honduras and El Salvador — each critical to any regional migration strategy — are skipping the Summit of the Americas, depriving Biden of symbolic heft and unity amid the photo opportunities and pageantry starting with an inaugural ceremony Wednesday. Mexico’s López Obrador said he delegated Foreign Affairs Secretary Marcelo Ebrard because the U.S. excluded Cuba, Venezuela and Nicaragua, all countries that send large numbers of migrants to the U.S. and neighboring countries.

Upon leaving for Los Angeles on Tuesday, Ebrard said Mexico’s close relationship with the United States was unchanged and noted that Lopez Obrador will visit Washington in July.

President Guillermo Lasso of Ecuador said addressing Venezuelan migration in the South American country would be a priority in Los Angeles, as well as combating drug trafficking.

The migration accord took shape during discussions of top diplomats in Colombia in October and in Panama in April. Experts who have been consulted by governments say it is largely driven by the U.S. and other countries that take in lots of migrants, such as Colombia, Mexico, Costa Rica, Peru and Panama.

The strategy appears to resemble a U.S.-only plan that Vice President Kamala Harris announced last July, calling for “secure and humane management of borders” and more paths to legal status.

So far, the Biden administration has little to show for it.

The meeting of regional leaders comes as several thousand migrants on Tuesday walked through southern Mexico — the largest migrant caravan of the year — with local authorities showing no signs yet of trying to stop them.

Mexico has tried to contain migrants to the south, far from the U.S. border. But many have grown frustrated there by the slow bureaucratic process to regularize their status and the lack of job opportunities to provide for their families.

U.S. authorities are stopping migrants crossing the Mexican border more often than at any time in about two decades. Under a pandemic-era rule aimed at preventing the spread of COVID-19, many are quickly expelled without a chance to seek asylum. But Title 42 authority, which a federal judge in Louisiana has kept in place, is applied unevenly by nationality.

In Eagle Pass, Texas, one of the busiest spots for illegal crossings, Cubans freely wade through the Rio Grande and are released in the United States on humanitarian parole, aided by Cuba’s refusal to take them back. On the flip side, Mexico has agreed to take back migrants expelled from Honduras, El Salvador and Guatemala, as well as Mexico.

Cristian Salgado, of Honduras, hoped he would be treated as Cubans he saw when he crossed illegally with his wife and 5-year-old son about a month ago but U.S. authorities turned him back to the Mexican border city of Piedras Negras without allowing him to plead his case. He remembers a border agent saying, “There is no asylum for Honduras.”