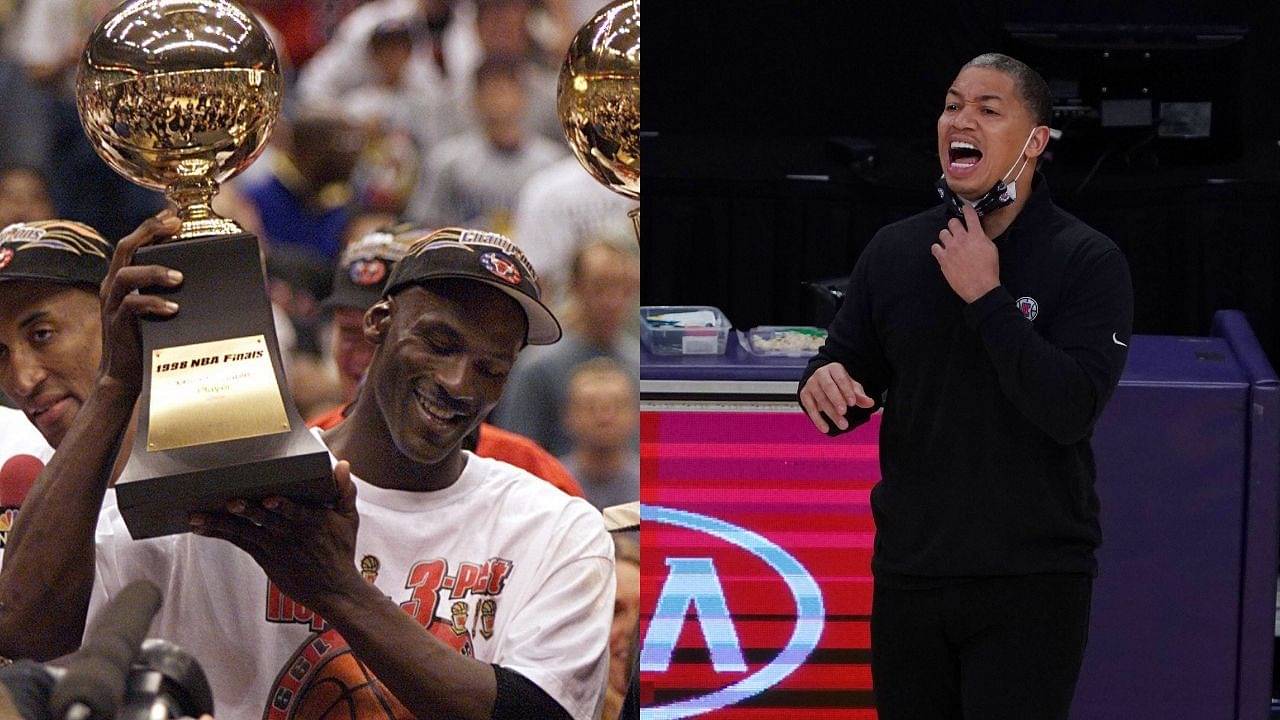 Michael Jordan was not a master of longevity, his two retirements are proof. Yet, at 40 years old, he played a full season on a single leg.

Today in the NBA, veterans are not known to play a full season. They are mostly known to help nurture the growth of players and boost team morale.

Examples such as Udonis Haslem, Andre Iguodala, and Goran Dragic do not play a lot of minutes. They instead help in other areas that a championship team needs to excel in.

Despite the drastic changes in the role of veterans, their utility is undervalued. The league will not continue to flourish if it weren’t for veterans imparting their knowledge and skill to the next generation.

Also read: “If Michael Jordan did it, why can’t LeBron James?”: MJ’s Bulls made it to the playoffs multiple times with a losing record, the Lakers might do the same

Michael Jordan played all 82 games at a ripe old age of 40 and on a single leg!

The current Clippers head coach Tyrone Lue has been dealing with a bunch of injuries to his team. The Clippers despite their troubles have secured the 8th seed.

Ty Lue noted his teams’ achievement and was rather proud of it. The coach was also one of the players who has been actively vocal about players’ longevity these days.

Lue looks back on his time with the Washington Wizards, where he shared the court with a certain Michael Jordan. The two played together towards the tail end of MJ’s career.

When Michael Jordan was 40 years old, tried to play in every game, he played in all the back-to-back games, & he never sat out at practice.

He wanted to play & practice every single day, & he was always the first person in the gym.

That is dedication to the game.

Lue recalls that MJ played all 82 games at age 40. He did so on one leg. “He wanted to practice every day and play all 82 games at40! When we came into the league that was a badge of honor. This man did it at 40 on one leg.”

Lue’s criticism of the players’ longevity these days is valid. However, another key thing to note here is that usage rates these days are higher than ever.

How will the current crop of vets fare in the playoffs? We have to wait and see.

Also read: “Michael Jordan is not the ‘GOAT’, he’s only the best player of the 1990s”: When Pistons legend, John Salley, refused to acknowledge Jordan as the greatest