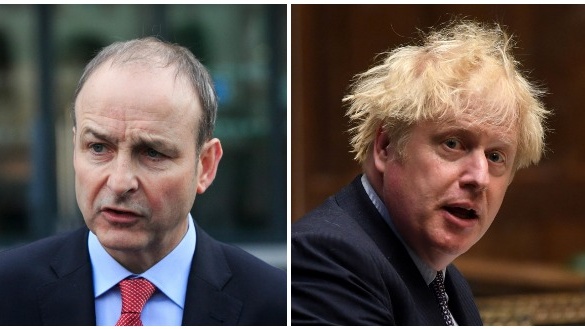 Taoiseach Micheál Martin and British prime minister Boris Johnson will attend the Six Nations match between Ireland and England at Twickenham together on Saturday in an attempt to improve the difficult relationship between their two governments.

During a bilateral meeting ahead of the match, the two leaders will discuss the British-Irish relationship in light of ongoing disputes over the Northern Ireland protocol and other issues, including Mr Johnson’s proposed amnesty for Troubles-related crimes.

The meeting is part of a three-day visit to Britain, during which the Taoiseach will also attend the St Patrick’s Day parade in London. Mr Martin and Mr Johnson are expected to talk about the crisis in Ukraine, which foreign secretary Liz Truss has suggested should encourage Britain and the European Union to resolve their differences over the protocol.

She told the Atlantic Council in Washington: “We share a deep commitment to peace in Northern Ireland and the Belfast Good Friday Agreement. At present the Northern Ireland protocol is creating an imbalance between communities.

“The protocol must support the Good Friday Agreement and protect east-west ties as well as North-South . . . Not because one is worth more than the other, but because both are essential to peace. The UK will always act to protect our sovereignty and the union – while also working closely with our allies.”

During his visit, the Taoiseach will attend a reception hosted by the Irish-born lord mayor of the City of London, Vincent Keaveny, and an Enterprise Ireland business event.

The Taoiseach’s visit comes as the British Labour party holds its biggest ever St Patrick’s Day programme with events in Manchester and London. The event on Friday evening at Manchester’s Irish World Heritage Centre is due to feature speakers including mayor Andy Burnham and be joined by members of the Ukrainian community in the city.

“They include more than 20,000 Irish staff in the NHS in Britain and thousands more frontline workers who continue to work tirelessly to help others. And leading scientists such as Prof Teresa Lambe from Kildare who co-founded the Oxford vaccine.”

Liam Conlon, chairman of the British Labour party’s Irish Society, said the events demonstrated the party’s commitment to strengthening relationships “across these islands” and supporting the Irish community in Britain.

“Not only does the Labour party support the Irish community, but it is empowering them through proper representation, and we’re delighted to celebrate the progress being made by London Irish leaders in local government.

“Council leaders and mayors from Donegal, Dublin, Tyrone and beyond are now leading the line for Labour in local government and this is something which all of us can be proud of,” he said.