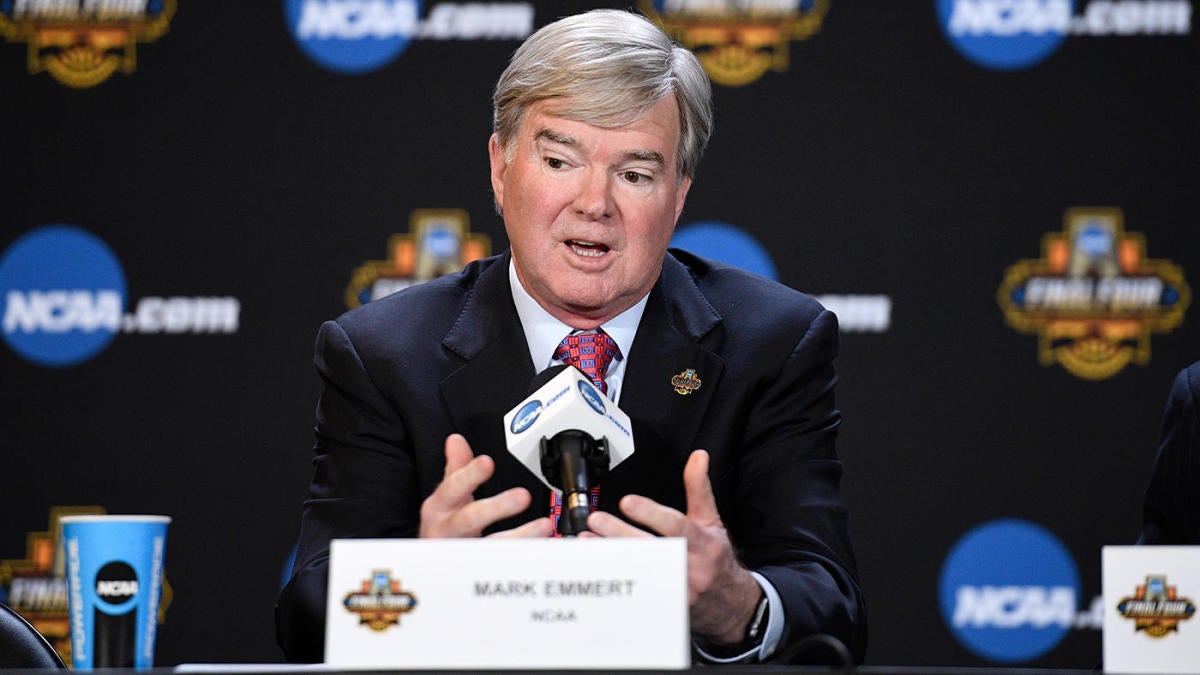 Jaws did not drop Tuesday despite another typical end-of-business-day news dump by the NCAA. President Mark Emmert is stepping down — and absolutely no one should be surprised. It was expected in the sense that it was about a decade overdue.

However, jaws actually did drop nearly one year ago to the day when the NCAA Board of Governors announced it had unanimously decided to extend Emmert’s contract through 2025.

Remember, this was before the Alston v. NCAA decision, before name, image and likeness rights made it free-range pay-for-play, and before Emmert slipped on one more banana peel on his way out the door by calling the national champions the “Kansas City Jayhawks” on the podium after the 2022 NCAA Tournament.

No calls were necessary last April when the NCAA board extended Emmert two more years. The outrage reached me as athletic directors and administrators called to share their incredulity. One AD begged his president, a member of the board, not to extend Emmert as the CEO was leaving for the vote in Indianapolis. The president did anyway.

That’s evidence, perhaps, of how Emmert kept holding onto his job despite one misstep after another. If he didn’t stack that board with his toadies, it sure had warmed to him for unknown reasons.

In the middle of the association’s deepest turmoil in its 115-year history, board chair John J. DeGioia, president of Georgetown, actually gave Emmert a vote of confidence. This was last March when inequities regarding the NCAA Women’s Tournament that went viral were leaking into the nightly news.

Out of touch doesn’t even begin to describe it, and apparently, it doesn’t end with Emmert. The 69-year-old leaves office with his enterprise foundering like a bass flopping around on a dock on a summer day.

But on Tuesday, at least we finally found out what it took to fire Emmert. We use “fire” because, if you believe there was indeed a “mutual agreement” between Emmert and the board as stated in the press release, you must believe Kansas City really is the home of men’s basketball champions.

More likely, the board determined Emmert is not capable of running what’s left of the NCAA. And it’s not much.

Running the equivalent of a Fortune 500 company that oversaw college athletics was clearly beyond Emmert’s ability. Some would argue that has been the case for a while.

The reconciliation of big-business athletic departments and the NCAA’s overbearing Big Brother presence as a nonprofit could not endure.

The NCAA president’s position has no real power; it’s just a bully-pulpit microphone with hopes of guiding strategy. But even that failed. Every time Emmert opened his mouth at important moments, something awkward seemed to come out.

Speaking with a group of ADs in 2019, Emmert called NIL an “existential threat” rather than a necessary and unavoidable change. He embraced one piece of bad legal advice after another. On his watch, North Carolina skated in one of the largest academic fraud cases in history. At that moment, it seemed like academics and major-college athletics absolutely could not mix.

It shouldn’t be surprising that the stunning events of 2021 came at the NCAA like machine-gun fire. The Alston v. NCAA decision stripped the association of its amateur foundation. Incredibly, the NCAA chose to go to the Supreme Court to fight athletes’ educational benefits.

“The NCAA is not above the law,” Justice Brett Kavanaugh famously said.

A mudslide soon followed. The NCAA largely stood on the sidelines on July 1, 2021, when state NIL laws were enacted across the country. Whether you love it or hate these payments to players, the NCAA had no legal bullets left to fight their birthrights.

That was really the end of Emmert … and perhaps the NCAA. It just took a while for the board to realize they and Emmert fiddled while college athletics burned.

Following that mismanagement, every decision made by the NCAA these days is subject to legal liability. In order words, “Will we be sued over this?”

That’s no way to lead or exist, and it’s why NIL is here to stay. So is the transfer portal and the one-time transfer rule.

There are only a couple of options. Either Congress comes in to essentially run the NCAA (not likely) or the system is collectively-bargained with the laborers themselves, the athletes (more likely than not).

If there was a strategy during the Emmert regime, it was hard to pin down. The executives who employed him used phrasing in the NCAA constitution to take down — then remove significant penalties from — Penn State football in the Jerry Sandusky scandal. That same constitution is now being rewritten allowing schools, conferences and divisions to basically govern themselves.

In the end, Emmert’s biggest drawback became his biggest advantage. The enterprise he oversaw was so messed up that he was a willing lightning rod to absorb criticism. It seems $2.9 million a year is enough to sooth hurt feelings.

The membership perhaps deserves blame for not running Emmert out sooner, but how can you blame a Division III school in Connecticut for not acting? That’s the issue with the NCAA. It is disjointed to the point the 1,100 schools in the association sometimes have little in common.

Emmert governed knowing that until he couldn’t bridge that divide. And candidly, maybe it is just impossible in world where Texas and Texas State are supposed to be “equals”.

Whoever replaces Emmert will no doubt be an honorable, accomplished person. It won’t be hard. The bar is set that low. That’s because Emmert took what was that bully pulpit and swung it like a sledgehammer in the fine china department of Tiffany & Co.

That person almost certainly will be from the collegiate or athletic world: a university president, AD or professional sports executive.

Emmert came into office on a reform agenda as a former college president at Washington. It has become obvious that presidential oversight of the NCAA has failed. That’s not just Emmert’s fault.

Former NCAA executive director Myles Brand, a former Indiana president, should have done something when Ed O’Bannon asked why he wasn’t compensated for the use of his image on that video game.

That moment in time is largely why the NCAA is sinking under its own bureaucracy. On Emmert’s watch, the NCAA spent hundreds of millions of dollars in legal fees aimlessly defending a “collegiate model” that, really, no one could define. The ultimate result being the association was twice found guilty in federal court of violating antitrust laws.

The FBI ultimately did the NCAA’s dirty work rooting out the seedy underworld of major-college basketball recruiting. In an ultimate irony, a lot of those “crimes” alleged by the federal government are now allowed under the current NIL structure.

Athletes could not be assured of their safety, health and welfare under Emmert. In 2015, NCAA lawyers actually used as a defense in a lawsuit filed over a Division III football player’s death that it had no “legal duty to protect student-athletes”.

Nine years later, this month in Eugene, Oregon, college football‘s sometimes abusive offseason conditioning is on trial. The NCAA is being sued by a former Oregon player for $100 million in punitive damages.

There will have to be a uniter to replace Emmert because the association can’t get more fractured at this time. The SEC and Big Ten run big-time football. Notre Dame AD Jack Swarbrick was predicting as early as seven years ago that there would be a breakaway of the Power Five schools.

The NCAA throws a heck of a party each March. We all watch and celebrate an American institution at the Final Four. But in what will be one of his final moments as NCAA president, the scope of the job rose to meet him one more time.

The president of the NCAA — Big Brother to everything holy in collegiate athletics — was presenting the national championship trophy earlier this month to a school under investigation for major infractions.

In the end, it looked like the NCAA president needed cue cards to know it’s the Jayhawks, Mark, from Lawrence, Kansas.