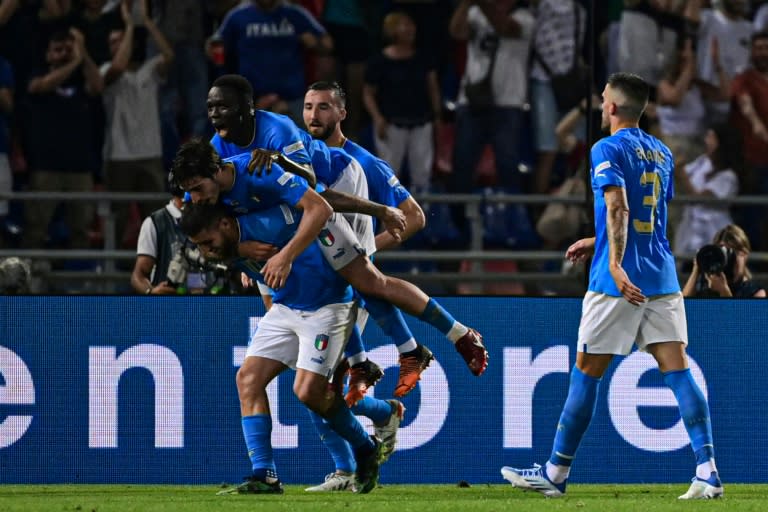 Roberto Mancini said Monday that Wilfried Gnonto shouldn’t have pressure put on him despite the teen attacker’s Italy debut exciting fans still reeling from failing to qualify for the World Cup.

FC Zurich forward Gnonto set up Lorenzo Pellegrini’s goal after coming on as a substitute in Saturday’s 1-1 Nations League draw with Germany and looked at home in a new-look Azzurri side not featuring many of those who won Euro 2020.

And coach Mancini says Gnonto needs to be left in peace to develop after an explosion in interest in the 18-year-old ahead of Tuesday’s clash with League A, Group 3 leaders Hungary.

“He’s only 18 and he shouldn’t have too much pressure put on him, he needs to be left alone to develop,” Mancini told reporters.

“For his age he knows how to play football like few others and he is very quick. If he develops without too much pressure, he can show us what quality he has.”

Gnonto was born in Verbania in northern Italy to Ivorian parents and was picked up by Inter Milan as a nine-year-old, but he didn’t sign a professional contract with the three-time European champions.

Instead he moved to Zurich where he has had game time and played an important role in the team winning their first Swiss league title in 13 years.

The first most Italian fans would have heard of Gnonto would have been when he came on for Matteo Politano in the 65th minute in Bologna, setting up Pellegrini five minutes later after some neat footwork on the right flank.

Mancini didn’t say whether Gnonto would feature on Tuesday but promised “a few changes” in Cesena as Italy look to build a new team.

They were dumped out of the World Cup following a stunning qualification play-off defeat to North Macedonia.