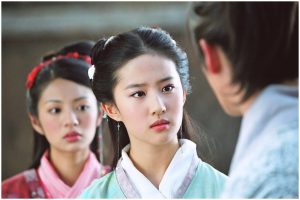 Scoring both good ratings and reviews, “Fairy Sister” Crystal Liu Yifei‘s (劉亦菲) new costume drama A Dream of Splendor <夢華錄> has successfully overturned the actress’s label as “box office poison”. However, her romantic life remains shrouded, and the 34-year-old has ever only admitted to dating Korean actor Song Seong-heon (宋承憲) in her twenty years of showbiz. Recently, rumors that the actress had taken an interest in renowned Chinese pianist Lang Lang (郎朗) sixteen years back once again became the topic of discussions!

In a 2006 interview, pianist Lang Lang’s father Lang Guoren (郎國任) revealed to the media that “Late last year, my friend was playing matchmaker for Lang Lang, and said that a lady called Liu Yifei likes him a lot and would like to be his girlfriend,” Asked by the media if it was possible between them, Lang Guoren’s reply was “it’s not possible, Lang Lang is too busy. Plus, our Lang Lang will be with a princess,”

While Yang Yang is an acclaimed international pianist who has performed with the world’s top orchestras, Liu Yifei was not a nobody too, having made a name for herself at 20 years’ old as an A-lister after achieving massive success playing Zhao Ling’er in Chinese Paladin <仙劍奇俠傳>. She was also personally named by famed novelist Louis Cha (金庸) to play Little Dragon Girl in Legend of the Condor Heroes <神鵰俠侶>.

Asked by the media about the rumors at an event, the actress responded with a smile and said, “Do you think it’s possible?“ Defending Lang Lang’s father by speculating that the news might be an online rumor, she wrapped up the matter saying “Before this, I didn’t even know who (Lang Lang) was, now I know that he is a great pianist. But I don’t take (the other party’s) career into consideration when I choose my boyfriend, for me there’s no difference between someone who plays the piano and someone who pops cotton”, and added that she is attracted to those who have “a manly disposition” and a “slim face”.

Lang Lang himself had responded by saying that “classical music” and entertainment are two vastly different pathways and added that he would not know much about the entertainment circle, hinting that he does not know who Crystal Liu is either.

With the popularity of A Dream of Splendor putting the spotlight on Liu Yifei, the matter was once again discussed by fans and viewers, who left comments addressed to Lang Lang such as, “It’s your fortune if you were really liked by Little Dragon Girl!”, “Crystal Liu has most gently expressed the meanest words”, “Fairy Sister’s reply is so curt, she’s making a detour to say that you’ve a big face!” and “Although (you’re) Lang Lang, but sorry you don’t match up to our Little Dragon Girl”.

Now happily married to German-Korean piano virtuoso Gina (吉娜), Yang Yang became a frequent guest on Chinese variety programs in recent years, and was seen in as many as four variety programs in less than a year. His frequent appearances on variety programs prompted critics to call him “international pianist turned variety show regular” and invited doubt that his piano skills were no longer like before.