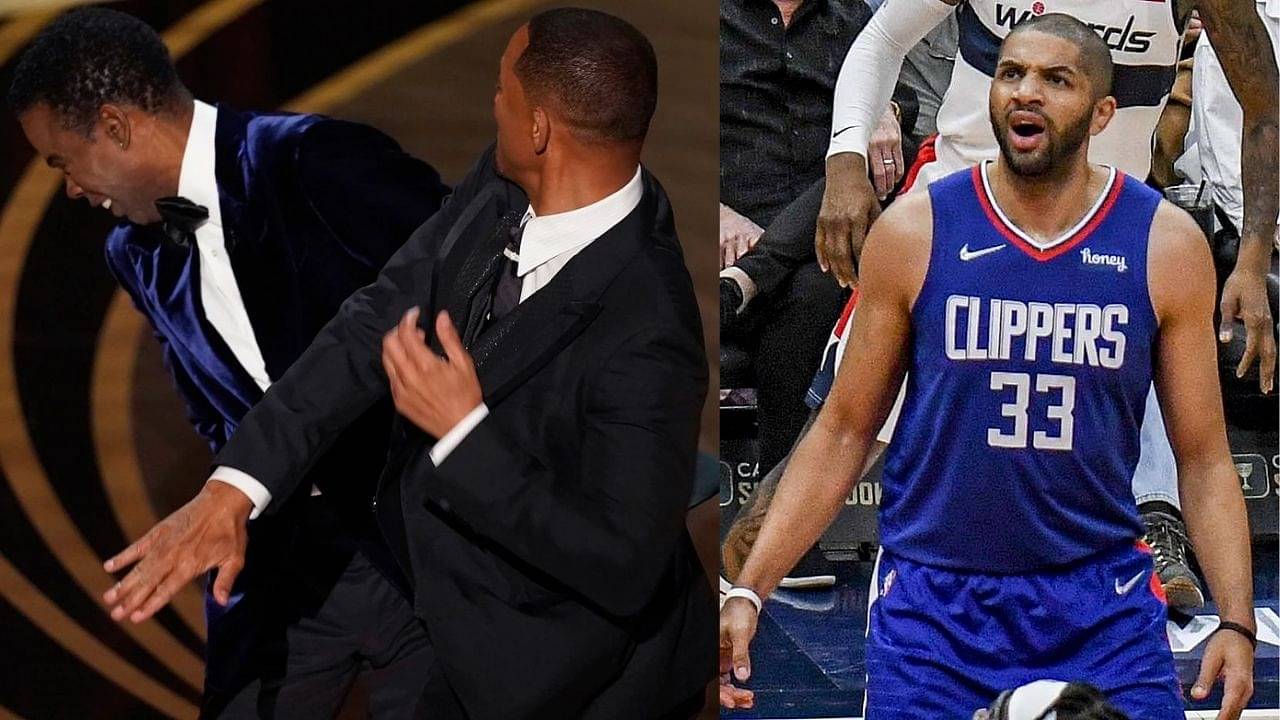 Today was a big day all around the world. To kick things off, we saw the Final Four bracket of the March Madness get fixed. UNC put an end to St. Peter’s magnificent run, and Kansas State held their ground to advance to Final Four.

In the evening, we had the 94th Annual Academy Awards. The annual gala celebration of the motion picture and sciences, and all the work that goes behind the same. Well, tonight, we got a little more show than we had anticipated. Chris Rock made a joke in terrible taste about Jada Smith, for which Will Smith climbed on stage and gave him a slap. Smith was also telling Rock to ‘keep my wife’s name out of your f***ing mouth.’

UNCENSORED WILL SMITH FOOTAGE AS SHOWN ON AUSTRALIAN TV pic.twitter.com/NcRfdjWxqe

Also Read: “A lot of motherf**ckers need what Will Smith did to Chris Rock”: Damian Lillard backs the ‘Best Actor’ winner for slapping Rock at this year’s Oscars

Just like countless others, Nicolas Batum and his wife saw the same, and started to question its legitimacy.

What happened between Will Smith and Chris Rock was unprecedented in Oscar history. The whole situation happened out of the blue, and had many people questioning what they had seen. After digesting what happened, many people went on to question if the same was scripted for views, or the whole thing happened for real.

Nicolas Batum and his wife were also doing the same. Failing to get to a conclusion, Batum turned to Twitter for their opinion.

.@LilyEBatum think it was staged and fake. I think it was real and he slapped him for real. What do you think? #willsmithchrisrock

NBA Twitter did not disappoint him. Everyone chipped in with their opinions.

i thought it was fake until i saw this https://t.co/Z6QKCB7bZn

If the LAPD is commenting it’s real.

Jada has alopecia, Will lost his cool. Hard to blame him. If you know a woman who’s dealing with hair loss you probably wouldn’t think it’s staged.

Also Read: ”In your highest moments, be careful, that’s when the devil comes for you!”: Stephen Curry quotes Denzel Washington, gives his two cents on the Will Smith-Chris Rock situation at the Oscars

As it can be seen, Lily Batum defended her view a lot and replied to a lot of comments saying the whole act was staged.

Considering how Chris Rock made a distasteful joke on Jada Smith’s illness, I don’t think the same was staged at all.