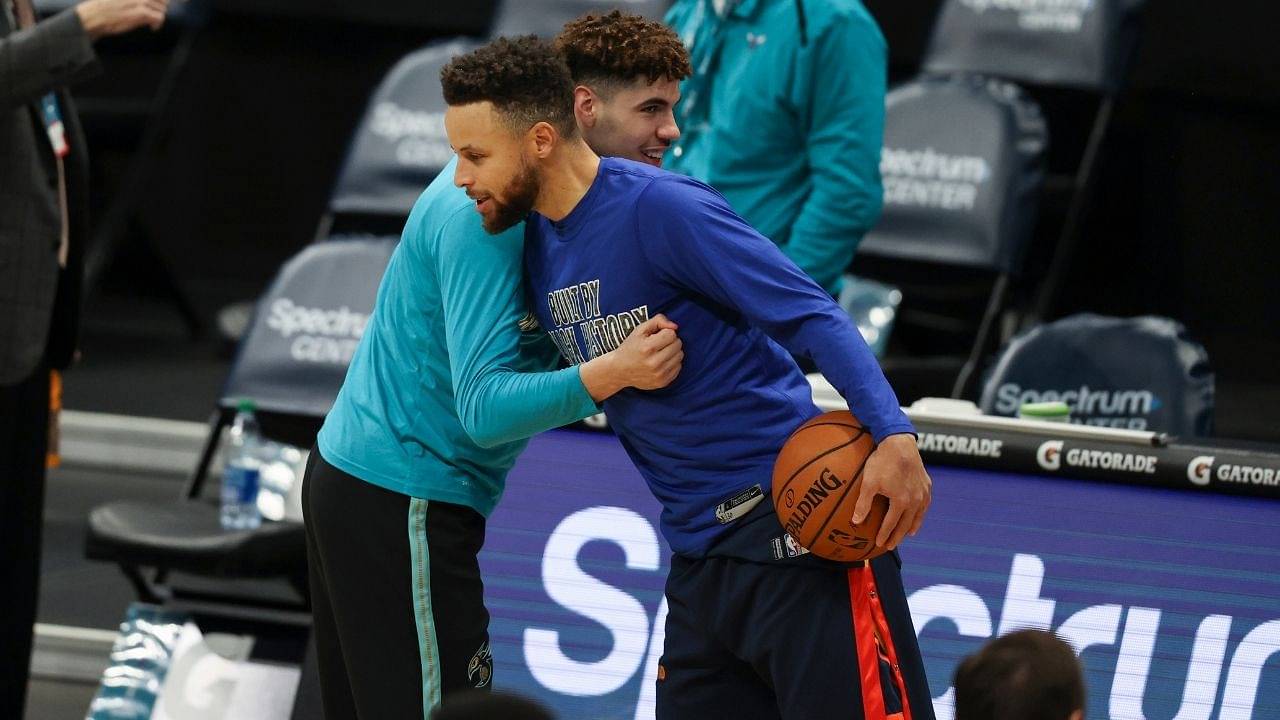 What if Stephen Curry and the Golden State Warriors selected LaMelo Ball in the 2020 NBA Draft?

It is the year 2020. The NBA Finals series between the Miami Heat and LA Lakers wrapped up some time ago, with LeBron James’s side declared as the winners of it all, in 6 games.

But, with that good and gone, now we have the 2020 NBA Draft, which had some serious questions around it. This year, the crop of rookies is being hailed as perhaps the weakest class of rookies in the history of the NBA. Slight flashback to reality here, could the analysts have been more wrong?

Now, back to the past, despite the perceived to be weak draft prospects, the top 3 picks still hold a lot of weight. And that is because of the presence of Anthony Edwards, James Wiseman, and LaMelo Ball.

The Ant-Man gets picked first overall by the Minnesota Timberwolves, and now it’s the Warriors’ turn to pick. Klay Thompson has suffered a torn Achilles a mere night ago, and things are looking tough in the scoring department, while the center spot doesn’t look great either. So, what do they choose to solve?

Well, they chose to solve the latter, picking Wiseman second-overall, before LaMelo Ball was picked no. 3 by the Hornets.

Now, James Wiseman was definitely not a bad pick-up. But 2 years, a rookie of the year, an All-Star mention, and countless impressive games later, we wonder. What would life have been like for the Golden State Warriors if they picked LaMelo Ball?

Also Read: “LaMelo Ball was cooking, but James Borrego sat him down?!”: Why Michael Jordan NEEDS to show Hornets head coach the door after loss to the Knicks

LaMelo Ball would’ve been so good, they still need him today

You read that right. But we don’t mean it in the way you think.

For starters, Stephen Curry and Klay Thompson are absolutely incredible, even during their downtime. And of course, Jordan Poole has been nothing short of inspiring during this season as well. But, it’s not their spot or replacement we’re talking about here.

Draymond Green is a special, special player, playing as the point forward of this team, while everyone else slinks around the court, looking for a shot. But, when he goes off the court, the offense turns a bit too iso-heavy for anyone’s liking, causing an inevitable dip to take place.

The franchise has tried to fill in this gap before with players such as Juan Toscano Anderson. Heck, they’re still trying something with Jordan Poole as well. But, they haven’t quite found the answer yet.

LaMelo Ball could have been that answer.

Yes, the defense would take a hit (even if the player has shown some serious quality there as well). However, a 6’7” guard with elite vision, and the ability to throw any pass? And all the shooters in the world to surround him with? We think we just heard Steve Kerr make a VERY suspicious noise.

Add to that his very, very clear superstar potential, and you have an NBA-ready prospect from the get-go, who will inevitably develop into your franchise cornerstone.

We will say James Wiseman has a TON of potential too, and he wasn’t a bad decision at all. But, we’d be lying if we said he’d be anywhere close to as good a player as LaMelo Ball is showing he could be, just a couple of years down the line.

With offense without Draymond Green being one of their main problems right now, this really does beg the question. Would the presence of LaMelo Ball practically guarantee an NBA championship?

We don’t know for sure, but it definitely would have made them a hell of a lot likelier to win it all.