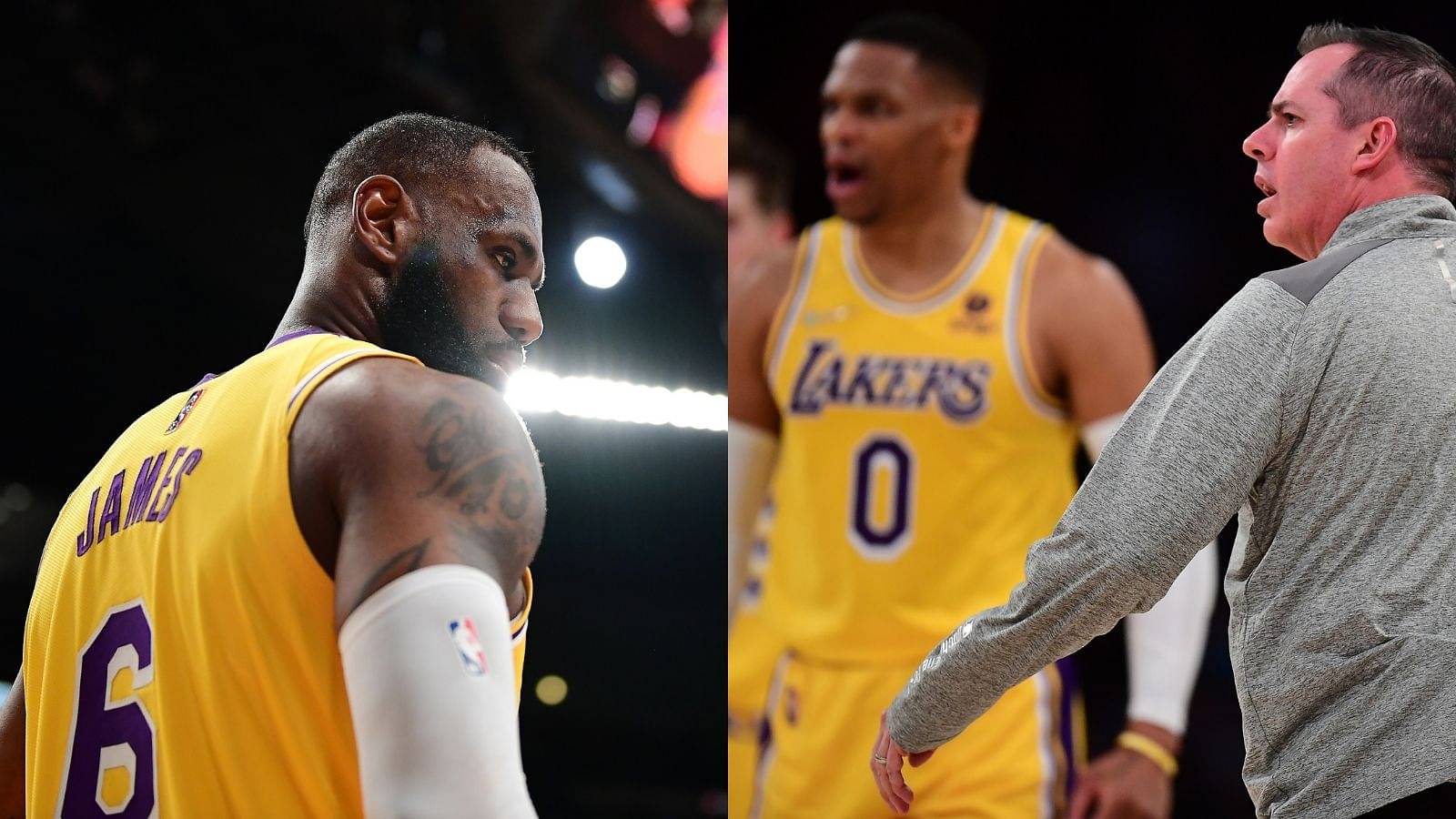 The Los Angeles Lakers desperately need to start getting wins, but they dig themselves a deeper hole every time they take the court, will they get to the Playoffs?

After failing to secure any trade during one of the most robust mid-season transfer windows, the Lakers are now 2-7 in their last 9 outings. Those seven losses have taken them exactly that many games under the .500 mark. Having Anthony Davis out for probably the rest of the regular season doesn’t help their cause in any way.

Anthony Davis suffers a nasty ankle injury and collapses right away during Lakers-Jazz.

AD had to be helped off the court and couldn’t put any pressure on his ankle.pic.twitter.com/QRHyMlvgrA

With 21 games still to go, there are thin chances that they’ll get out of the slump they are in and finish even within the upper division of the Play-in spot.

Anyway, the Playoffs spots might already not be a concern for anybody who puts on a Purple and Gold uniform to represent LA. But the Laker Nation would still like their team to play hard in their remaining games and get whatever they could out of the bunch of old men, about whom LeBron James was so confident before this season started.

Also read: Golden State Warriors Playoff Picture: An insight into the strength, weaknesses, playoff matchup, and a possible trade for a ‘washing machine’

So, let’s break down what could be in store for the 17x Larry O’Brien winners as all their hopes rest on the 37-year-old shoulders of the King.

Potential strengths that could get Lakers into the Playoffs

Lakers’ strength? It’s like Oasis. Having the most number of NBA’s all-time top-75 players in this team, this section should have been the most exciting subject to discuss, but pardon Lakers management, the King, and his GM skills.

This team traded for Westbrook seeing him as the third option behind their Championship-winning duo, so they struggle to see what their pair of point specialists can do together.

Their Tuesday night game against the Mavericks looked like a lost cause again, following their humiliation in New Orleans. But Brodie’s hustle and LBJ’s quickfire 3 consecutive shots from the deep helped them cut down a lead which was once a 21 point deficit.

LeBron James on Russell Westbrook, and how he can help him pic.twitter.com/1QW9Lx8g7s

And come Playoffs time, oppositions might not get back in the games after that kind of momentum shift. These two undoubtedly have the capability to deliver what it takes to deliver on the offensive side of the court, and they showed some of it in the hard-fought game against the Mavericks.

Carmelo Anthony: Their only dependable sharpshooter

As soon as anyone starts counting on Carmelo Anthony’s struggle in a game or two as his potential downfall because of his age, the man brings on his A-game and brings back some vintage Nuggets and Knicks Melo to the table. He is their best shooter.

Delivering 13.6 points, 4.1 rebounds, an assist, and almost a steal as well as a block each game, while shooting close to 40% from deep, Anthony has been one of the very few positives this season. He has consistently knocked some massive threes for the Lakers in close wins and if it was not for him, they’d be dwelling down at the bottom of the table.

He has delivered it with the constant attention of the defense. Once Anthony Davis comes back he’ll be much more open and will not struggle to shoot the lights out in any arena the Lakers get to play in the postseason. Maybe he should help THT and Austin Reaves in knocking down some jumpers. Those two miss a lot of open shots.

This is both their strength and weakness as they have consistently displayed their lack of attention in the game throughout the season, but like their recent game when they decided to switch on the defense even Luka Doncic struggled to get a bucket.

The weaknesses we would talk about will probably keep them away from winning any Playoffs or even Play-in games.

AD’s struggle in keeping himself fit enough to play a full regular season has never been a secret to anyone. Lakers and James still gladly welcomed him from Pelicans giving away half their team.

While that did repay them with a championship, had they not made the deal, LeBron would have a shot at the title 4/4 times at the title with all those youngsters still in the team.

And fast forward to now as Davis struggles for the consecutive season around the time when Play-offs approach, James himself looks struggling with his knee.

LeBron James on whether his knee (Was questionable heading into the Pelicans game) is affecting his play on the court.#NBATwitter #LakeShow pic.twitter.com/O16Bfrx7jD

After being declared questionable for the Mavericks games, LBJ did take the court in the crucial game. But he drove to the basket just once for putting the ball down with authority, relying mostly on jump shots and fadeaways throughout the game. And that might just be the white flag from arguably the 2nd best player of all time.

While he might restrain himself from totally shutting down for the season, his presence without his most lethal weapon – his drives to the rim, wouldn’t be a concern for most teams. Not with the shooters, they are surrounded with, barring Melo.

Everything the Lakers do on the court, which hasn’t been much this season, is pointless with the attitude with which they played against the Pelicans on Sunday.

The remaining 21 games they have left they need to access how they can change it. Against the Mavericks, they had the correct intention, but Doncic’s Mavs were just a better team overall.

They cannot in any multiverse win 16-18 games out of those 21. So choosing which opponents can and must be dominated and against whom they must sit tight and avoid injuries is most important as of now.

Where the things stand currently, the 9th placed Lakers with a 27-34 record, would either end up facing the rejuvenated Minnesota Timberwolves or their across-the-hall rivals LA Clippers. In any which case, they’d have to defeat their opponents twice without losing a game. Well, that’s how Play-in works.

Having watched Lakers’ misery throughout the season, they have struggled to get two straight victories against the .500 under teams. How coach Frank Vogel and LeBron James are going to lead them for the Play-in tournament will be a thing to watch.

However, they are just 2 games above the Pelicans as well as the Blazers both of whom are fancying their chances at the Play-in tournament with a far better attitude than the Lakers. Blazers even have much easier opponents to face this month

This stretch for the Blazers is wild lol. They play only one team above .500 and 10 other potential teams that could be in the lottery. Hope this doesn’t mess up the tank pic.twitter.com/OHKGyRA0W1

Although in the last two games Blazers were blown away by the Warriors and the Nuggets, they were on a 4-0 run before that. Wherein they blew away the reigning champions – the Milwaukee Bucks and one of the hottest teams in the league – the Memphis Grizzlies.

That should scare the Lakers to the core because if those two teams close the gap of 2-games Lakers do not have enough confidence or momentum to handle the pressure of going into the remainder of the games with two young teams competing to get better of them.

Also read: Phoenix Suns Playoff Picture: Breaking down the Suns’ strengths, weaknesses, and whether or not they should be active on trade deadline day

If they do get out of the Play-in tournament the Suns or the Warriors would be waiting for them eagerly. King James should fancy shutting down for the season you say?