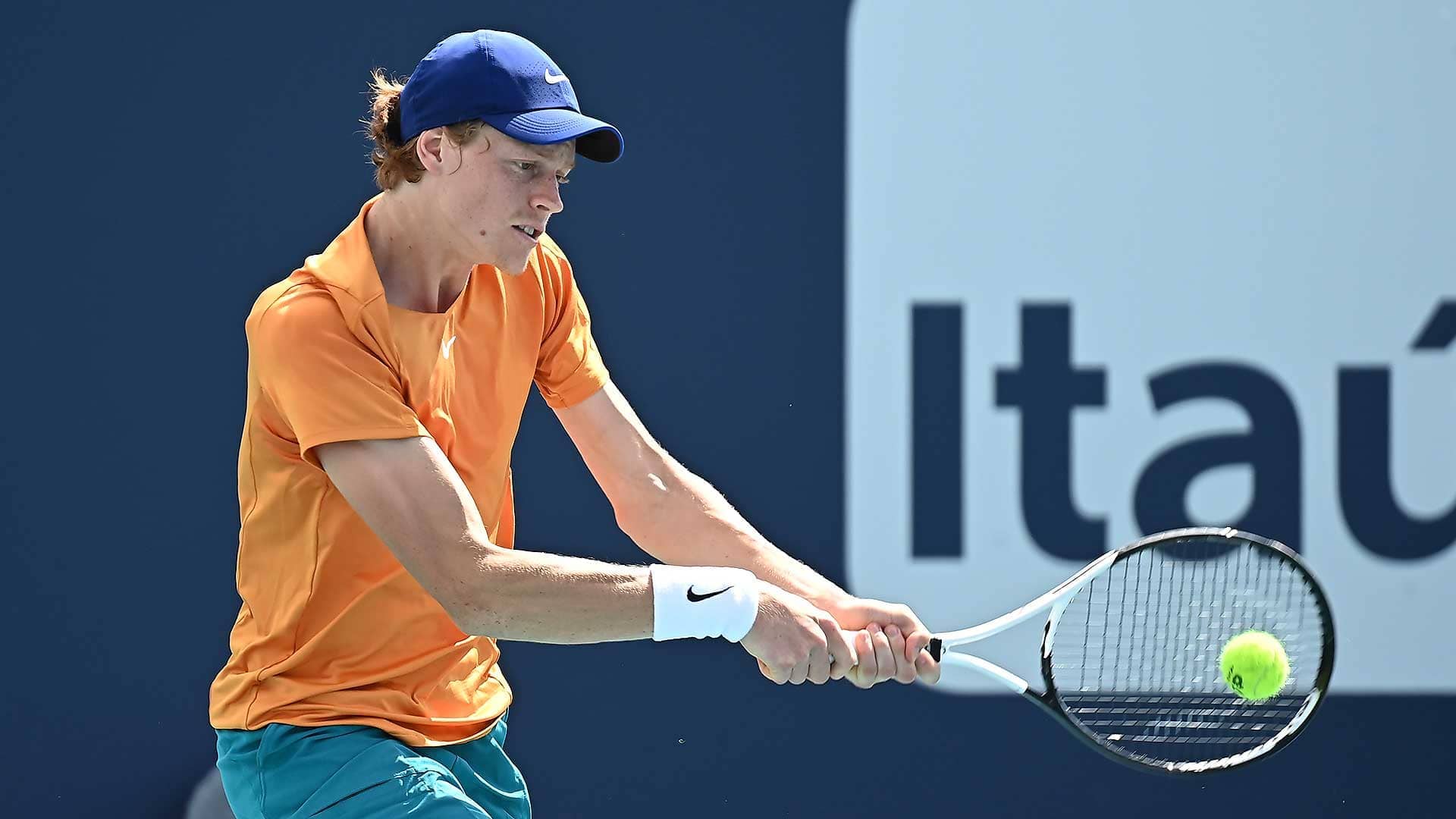 The Miami Open presented by Itau reaches its third-round stage on Sunday, with 2021 finalist Jannik Sinner and second seed Alexander Zverev seeking simpler paths after battling opening wins. Nick Kyrgios has had no such issues in Miami so far and faces Fabio Fognini in an intriguing battle of two ATP Tour showmen, while Casper Ruud, Cameron Norrie and Gael Monfils are also chasing a spot in the last 16 at Hard Rock Stadium.

It may have had a bumpy start, but Jannik Sinner’s Miami campaign is up and running.

The 20-year-old Italian hit a significant milestone in south Florida in 2021, reaching a maiden ATP Masters 1000 championship match before falling to Hubert Hurkacz. Sinner enjoyed a less-than-welcoming return to Hard Rock Stadium on Friday as Emil Ruusuvuori pushed him to a deciding set tie-break, but despite that struggle the World No. 11 is feeling optimistic as he prepares for his third-round clash with Pablo Carreno Busta on Sunday.

The ninth seed will certainly need to find his level to overcome Carreno Busta, the World No. 19 who won the pair’s only previous meeting in Rotterdam in 2020. The Spaniard also knows how to forge a deep run in south Florida, reaching the semi-finals when he last played the tournament in 2018.

Sinner or Carreno Busta’s fourth-round opponent will be decided in a meeting between two of the ATP Tour’s greatest showmen, Nick Kyrgios and Fabio Fognini.

When Kyrgios’ game clicks things tend to happen quickly, no matter who is standing on the other side of the net. The Australian produced one of the performances of the season in the second round to cruise past fifth seed Andrey Rublev, who came into the clash with an 18-3 record in 2022, in just 52 minutes.

Kyrgios faces an opponent on Sunday who is just as capable of such destructive match-winning spells. World No. 34 Fognini has an 11-9 match record in Miami but was a semi-finalist in 2017 and showed he is willing to dig deep in his three-set win over Taro Daniel in the second round on Friday. Kyrgios and Fognini’s only previous meeting came in 2018, also in the third-round in Miami, the Australian running out a 6-3, 6-3 winner.

Alexander Zverev is chasing his first title of the year in Miami and will hope his battling three-set win over Borna Coric on Friday is the catalyst for something special as he prepares to prepares to face World No. 54 Mackenzie McDonald in the third round.

The German suffered a deciding tie-break loss to Jenson Brooksby at the BNP Paribas Open in Indian Wells and, perhaps with that defeat in mind, felt that the nature of his win over Coric was as important as the result itself.

Zverev holds a 2-0 ATP Head2Head series lead over McDonald, including a straight-sets win in Montpellier in February, but the American is enjoying his best run in Miami after upsetting 26th seed Grigor Dimitrov in the second round.

Waiting in the fourth round for Zverev or McDonald will be Thanasi Kokkinakis or Denis Kudla. Kokkinakis saved match point with a stunning backhand pass before completing a comeback win against Diego Schwartzman in the second round, and the Australian will hope for more moments of magic as he seeks a first win over the American qualifier. Kudla is flying high after beating Juncheng Shang and Lorenzo Sonego to reach the third round of a Masters 1000 event for the second time, however, and he has topped Kokkinakis in both of the pair’s previous meetings.

Sixth seed Casper Ruud will seek to maintain his perfect Masters 1000 record against Alexander Bublik. Ruud beat the Kazakh at both the Mutua Madrid Open and the Rolex Paris Masters in 2021 and stormed through his second-round clash against Henri Laaksonen on Friday for the loss of just three games. Bublik edged the pair’s most recent meeting, however, with a three-set win in the Davis Cup qualifiers in March.

Ruud and Bublik’s potential fourth-round opponents are 10th seed Cameron Norrie and Hugo Gaston. Both carry momentum into their first ATP Head2Head meeting, with Norrie staying strong to oust emerging talent Jack Draper to reach the third round for the second year in a row.

Gaston breezed past wild card Emilio Nava for the loss of just three games to start his campaign and then upset another American, 2018 champion John Isner, in the second round. The Frenchman is making his first third-round appearance in Miami but has recent pedigree at Masters 1000 level, having beaten Carreno Busta and Carlos Alcaraz on his way to the quarter-finals of the Rolex Paris Masters in November.

It’s been a memorable week in Miami so far for Argentine brothers Francisco Cerundolo and Juan Manuel Cerundolo, who have both reached the third round on debut at Hard Rock Stadium and will face each other in the last 16 if they win their respective matches on Sunday.

That will be a tough ask. 23-year-old Francisco faces 22nd seed Gael Monfils, whose second-round win over Oscar Otte was his first match in Miami since he reached the quarter-finals in 2016. Meanwhile 2021 Intesa Sanpaolo Next Gen ATP Finals competitor Juan Manuel takes on home favourite Frances Tiafoe. Victory for the 28th-seeded American would make it four consecutive fourth-round appearances in Miami.

In the doubles, top seeds Nikola Mektic and Mate Pavic continue their campaign with a second-round clash against Rohan Bopanna and Denis Shapovalov. The Croatian pairing started its title defence in style by beating Nikoloz Basilashvili and Laslo Djere in straight sets in the first round.