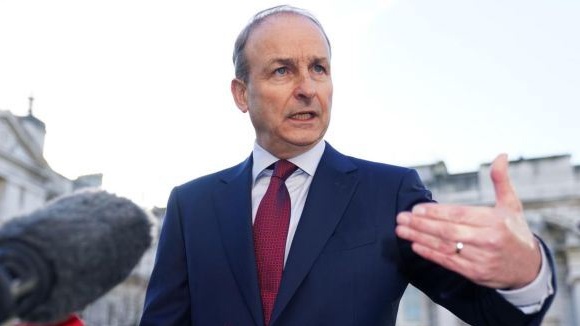 The Taoiseach has said Ireland will have to “reflect” on its long-standing policy of military non-alignment in future European conflicts, as Russia’s invasion of Ukraine escalated with an attack on a nuclear power station in Zaporizhzhia.

Micheál Martin said Ireland is “facilitating” the European Peace Facility, which, he noted, was for the first time deploying “lethal weapons” to Ukraine to defend their country against Russian soldiers.

“We are not neutral in respect of what’s happening in Ukraine. As members of the UN Security Council we uphold the values of self-determination, territorial integration and the sovereignty of people, and we believe in defending those values, and that is why as a country we have been full lock-step with our European colleagues on the sanctions and also in facilitating the deployment of the European Peace Facility.

Speaking in Limerick, Mr Martin said Ireland has “already evolved” its neutrality policy within the European Union “by participating in Pesco” the European defence agency, “and also in terms of threats around cybersecurity and peace enforcement missions under the EU umbrella”.

“I think the important point I would make is that this war does necessitate reflection on all of that, but it should be of a more deliberate kind,” he said responding to questions on whether the Government was considering joining Nato, and if Europe was pressing Ireland to join.

Mr Martin said discussions around Ireland and Nato were “for another day”, yet he acknowledged that while Ireland was presently “focused” on supporting sanctions against Russia and sending humanitarian aid to Ukraine, “President Putin’s assault on Ukraine threatens the world order and that does cause and is an occasion for reflection”.

Mr Martin said he was “very concerned” about the risk of Russian missiles potentially striking a nuclear reactor in Ukraine, and what that would mean for Ireland and the rest of Europe.

“The Russian aggression and war on Ukraine is morally unacceptable and obviously it is in everyone’s interests that the spread of nuclear radioactive material doesn’t happen, and that every effort is made to prevent that from happening,” the Taoiseach said.

“This is a very serious moment in the history of Europe, in the history of the world, given the nature of the Russian attack on Ukraine. Things are very finely balanced and we need cool heads in terms of dealing with this situation.”

The war has already impacted Ireland in terms of “extraordinary” high energy and fuel prices, and “grain” imports from Ukraine and Russia will also be hit.

“Every single government department is now working on scenario planning, potential impacts and how can we respond to those,” the Taoiseach said.

He acknowledged, given the country’s housing crisis, that providing shelter for Ukraine people fleeing the war would be “very challenging”.

“We are in a wartime situation, which is something we haven’t experienced really since the 1940s, in terms of such a mass movement of people in such a very short space of time, from a war zone into neighbouring countries within the European Union – that will have impacts, there are no easy answers, there are no easy solutions,” he said.

“It will not be easy, we don’t have ready-made solutions for the scale and numbers that are going to arrive, but we are going to do the very best that we can,” he added.

The Taoiseach also moved to reassure 450 workers at the Russian-owned Aughinish Alumina refinery in Askeaton, Co Limerick, that Ireland would do everything it could to ensure it would not be included on a sanctions list.

While sanctions are being “continually reviewed”, he added, “what’s very important is that the balance is right, that the objective of sanctions is to punish Russia not Europe, and that applies to Aughinish Alumina and others […] so we have to balance that and bear all of that in mind, which the European Commission and the US and others have done in designing the sanctions that have been imposed”.