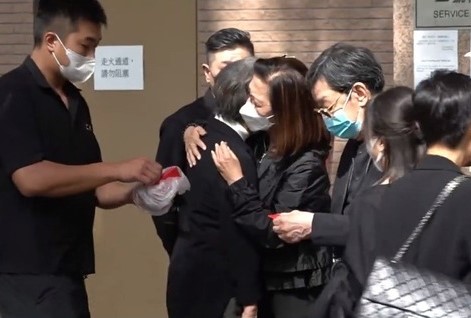 On May 17, a memorial service was held for the late actor Kenneth Tsang (曾江) after he passed away last month in a hotel room. While the memorial service was attended by Kenneth’s friends, relatives and the media, Kenneth’s daughter and theater actress Musette Tsang (曾慕雪) revealed that the funeral was kept simple and low-key to respect her father’s wishes.

Musette and Kenneth’s widow Lisa Chiao Chiao (焦姣) woke up early and made their way to the catholic church to prepare for the service memorial. By the early afternoon, Kenneth’s relatives and close friends began arriving. Kenneth’s celebrity friends such as Bowie Wu (胡楓), Helen Ma (馬海倫), Barbara Tang (鄧拱壁) and Franco Yuen (阮兆輝) were in attendance.

The memorial service ended around 3 p.m. as Kenneth’s casket was sent to a crematorium. At the solemn event, Musette left the church while carrying onto Kenneth’s photo while Lisa followed directly behind. Bowie and Helen approached Lisa to give her an embrace and their condolences. Meanwhile, Musette was able to control her emotions and thanked the media before leaving the venue.

After the memorial service, Kenneth’s staff left a final message on the late actor’s Tik Tok account, “Teacher Tsang, today was your memorial service. There will be no more goodbye and you won’t be here anymore. While you sleep, I will think about you. My most respected Teacher Tsang; have a good trip. You have said that you lived a good life. I wish you well in heaven too. Thank you for everything!”

Helen also posted her own message on her social media and wrote, “I reluctantly sent big brother on his last journey. Everyone is be lining up to go but you left first. See you in another world in the future.”