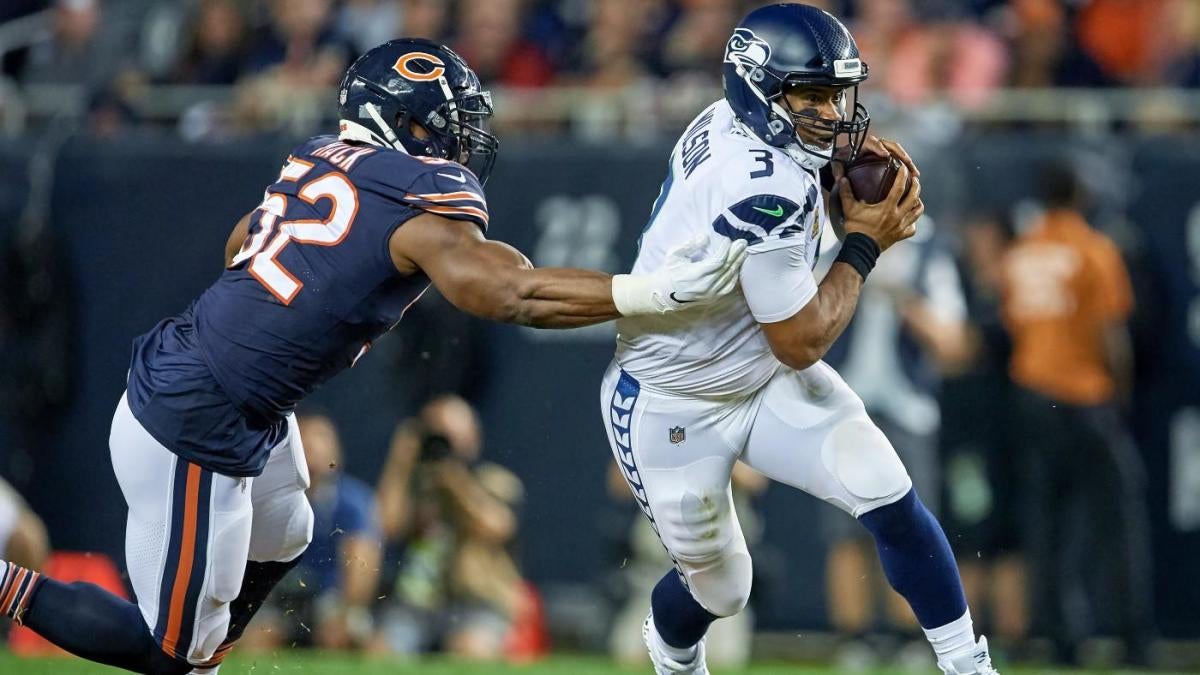 The era of The Super Team in the NFL is upon us. The difference between the Haves and Have Nots — or the Hopeful and Hopeless — in this league is growing like never before.

The league is evolving, players are getting more ownership of where they go and who they go with, and NFL front offices are increasingly bending to their will. The arms race seems to have few limits, and it’s especially acute right now in the loaded AFC. After Tom Brady and his cast of associates (Gronk, AB, Playoff Lenny, etc.) brought a Super Bowl to Tampa in 2020, and after the Rams mortgaged their future drafts to somehow land Matthew Stafford, and dealt for Von Miller, and then had Miller recruit Odell Beckham Jr. to LA for what became a Lombardi Trophy run, we are seeing the Broncos enter the fray, while the Chargers, Bills and Bengals — yeah, the Bengals — might not be too far behind.

The league year won’t officially begin until Wednesday, but we’ve already had a blockbuster trade a day this week, and by Monday we’ll have a pretty good idea about where most of the top free agents are going, and very likely more movement in the quarterback market as well. Kirk Cousins is the next QB domino to fall, with the Vikings very open to dealing him, and the Colts and Seahawks are among the possible landing spots. Teams are being more proactive than ever in recent years, and increasingly football transactions are starting to look more and more like what we routinely see in the NBA and MLB.

As more franchises hire younger general managers — by and large analytical by nature, not bound to tried-and-true-football-man-groupthink when it comes to roster construction and aggressive at their core — we are seeing teams get more creative regarding the cap and asset reallocation. And as it becomes more commonplace for owners to be willing to “tank” and sell off assets in hopes of emerging better for it (the Browns, Giants, Dolphins, Texans, Lions and Jaguars have all done this to at least some degree in recent years, and the Bears and Vikings are on their way to joining them), the trend is only likely to continue.

Teams are making power moves, they are finding willing trade partners to make it happen, and we’ve only just begun this offseason. Conversations with agents and executives are making it quite clear which teams seem truly motivated to go all-in over the coming days and weeks, and which seem poised to take some short-term agony in hopes of long-term success (and a few teams are likely headed to that outcome even if they are fooling themselves into thinking otherwise). With that in mind, here are some of the movers and shakers, for better or worse, as we head towards to official start of the league year.

They already completed what will undoubtedly be the most impactful move of all of 2022 by landing Russell Wilson. But you’d be naïve to think they are stopping there. Wilson made it explicitly clear in his later days with the Seahawks as to what he was looking for, and the Broncos had to be acutely aware. It’s about being protected (most sacked QB since he entered the league) and having an offensive-minded head coach willing to push the ball down the field and the weapons to capitalize. Denver already had much of that in place, but much like Brady, Wilson has the cache to recruit other players and go the LeBron route. League sources continue to make it clear to me that the Broncos will be very aggressive to add an elite pass rusher (Miller or Chandler Jones or Randy Gregory or someone of that magnitude) and fortify their offensive line. It’s gonna happen, just a matter of which players. You don’t land a QB of this magnitude to turn around and half-ass it the rest of the way. GM George Paton, in his second season, is far from done.

Already this team has shed its low-spending skin, and it must continue. We were begging them to retain Mike Williams, and they did so without requiring the franchise tag, and begging them to add a true bookend pass rusher to compliment Joey Bosa, and they landed Khalil Mack for just one draft pick of consequence (a second-rounder). They can’t stop there, and the sense I get from my reporting is they won’t. Competing for market-share with the Rams, as the step-kids in LA, got even more difficult with them landing a title. Protecting Justin Herbert for the long haul is a must, and adding some bite to that offensive line is in order. The Chargers know as much, with Brandon Scherff someone who fits that bill. They need more attitude on that side of the ball, and what about reuniting Mack with his old tag team partner from Chicago and bringing in Akiem Hicks, too? In the AFC, to beat these QBs in January, you need to be able to get sustained rush with your front, and some 4-3 looks might be in order for this group, too. I’d give it serious consideration.

For all the public verbal bouquets Bengals decision makers continue to throw at their offensive line, and for all they accomplished last year, the lasting image has to be Joe Burrow writhing in pain, screaming in agony and grasping his knee late in the Super Bowl. He was tormented the entire second half by the Rams, just as he was in all prior playoff games, and it has to stop. The Bengals have a ridiculous amount of cap space, and outside of franchise tagged safety Jessie Bates, no other mouths to feed. Their best players are secured long-term on team-friendly deals, and there is a growing expectation within the industry that the Bengals will add multiple starting offensive linemen in free agency. They need proven, ornery veterans who will make people think twice about taking any liberties with their franchise QB. Duke Tobin and Mike Brown had the best offseason of any NFL team a year ago, they are willing to keep spending, and I wouldn’t bet against their heater continuing into 2022.

They don’t have a great cap situation, which comes with building a roster as deep and talented as theirs. But they have an uber-aggressive coach and GM, who are proactive in ascertaining any potential ways to improve the roster, and an owner already showing his willingness to top the league in actual payroll. They can get creative, and I continue to hear them deadest on adding an impact pass rusher. And rival GMs would not be surprised if they came away with Christian McCaffrey as well. They can almost taste that Lombardi-tinged champaign, they fully grasp the gauntlet they are up against in the AFC, and I wouldn’t discount their ability to make a splash or two.

Timing, they say, is everything. And it just so happens that Miami hired a running game savant head coach at the very moment in which many players who have already shined in his scheme, or who are perfect fit for it, are on the market. Mike McDaniel knows they have to redo a perpetually poor offensive line to make his scheme go, he has a blueprint for it from his time with Kyle Shanahan in San Francisco, and an owner who has been willing in the past to set the market at multiple position groups to land premium talent. McDaniel knows how important nimble left tackle Trent Williams was to the 49ers offense, and Terron Armstead is the closest thing to it, and he will cost a ton, but the 49ers just paid a ton for Williams last offseason. Laken Tomlinson rebooted his career with the 49ers at guard, and guess what — he’s a free agent, too! Wanna make Tua feel truly wanted after a rough time of it with former coach Brian Flores? Well, his college center from Alabama, Bradley Bozeman, is a free agent, too, and has been a standout at left guard and center. Hmm. Oh, and one of the very first moves Shanahan and McDaniel made in San Francisco was signing a Ravens free agent fullback to a then record contract and making Kyle Juszczyk a fulcrum in that scheme. Guess what, the Ravens have a unicorn hybrid fullback, tight end, H-back, extra offensive lineman with freakish athleticism at over 300 pounds about to hit the market in Patrick Ricard. Go get him. The defense is already on the rise, and McDaniel won’t meddle with a unit that was dominant in the second half of the season. The Dolphins should be active.

And on the other side of things …

The only positive thing you can say about the Cowboys right now is that they are lucky they play in the NFC, and especially the weak NFC East. But they’ll be hard pressed to even tread water from a roster standpoint, let alone make any gains. Every week there is another ugly scandal involving ownership or team officials, the offensive line is looking like a shell of what it once was, they are stuck with what might be the worst non-QB contract in the NFL for a running back who is no longer average let alone special (Zeke Elliott), oh and the franchise QB who seems to require surgery every six months went under the knife again. The coach is seeing the ghost of Sean Payton wherever he goes, they are gonna cut Amari Cooper to shed his $20M salary, I’m told they asked Demarcus Lawrence to cut his salary from $19M to $10M to stay (good luck with that), and after all of their years sticking with Randy Gregory, he will likely cash in elsewhere in free agency. Their franchise tag of tight end Dalton Schultz read like a panic move around the league and this feels like a team that had a window close with nothing to show for it. Jerry Jones can’t buy his way out of this.

Sorry Bears fans, but you are rebuilding again, only with nothing to show for it. Last prior regime totally botched the QB thing, and ownership, largely failing since the mid-1980s, lacked the gumption and acumen to fire Ryan Pace and Matt Nagy after the 2020 season, which would have been the best time to start selling off older players and adding as many picks as possible to put around a rookie QB. Instead, they are primed to watch Allen Robinson and Akiem Hicks and James Daniels walk out the door as free agents — getting only comp picks in 2023 — while trading Mack with limited return. At this point they might as well get whatever they can for pass rusher Robert Quinn, entering his age 32 season, and safety Eddie Jackson, 30, and whatever else you can peddle. Might as well go big. Because there is plenty of competition at the bottom, including right in the NFC North.