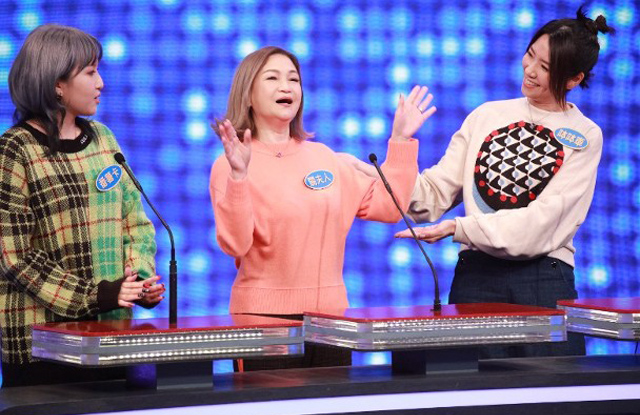 Since Eric Tsang (曾志偉) got promoted to General Manager, he encouraged artistes to propose new ideas for variety shows. Known for his creativity, wittiness, and talented impersonation skills, Johnson Lee (李思捷) got the green light to obtain the license for a Hong Kong version of Family Feud (思家大戰).

The show’s 15th episode sees Eddie Kwan (關禮傑) and his family join in on the fun, including his wife, older daughter Fabienne Kwan (關楓馨), younger daughter Franziska Kwan (關楓盈), and good friend Stephanie Che (車婉婉). Enjoying the opportunity to film as a family, Eddie expressed, “We thought the show was very fun to watch, so Fabienne suggested I seek out Johnson for this opportunity. She convinced me, so I went on to convince my wife and younger daughter [to be on the show].”

The Kwan family faced off against a team led by Nancy Sit (薛家燕), which includes Karen Tong (湯寶如), Jack Wu (胡諾言), Fred Cheng (鄭俊弘), and Kayee Tam (譚嘉儀). On participating in Family Feud, Nancy expressed her initial distrust in Johnson due to her experience with his Office of Practical Jokes <玩嘢王> show in 2013.

When Johnson invited her to be on Family Feud, Nancy recalled her initial reservations, “He told me he would invite me on the show. I waited for more than two months, and there still wasn’t anything but talk. Even when the show went live, I still hadn’t received an official invitation. I thought he must for sure be pranking me again!”

This article is written by Huynh for JayneStars.com.