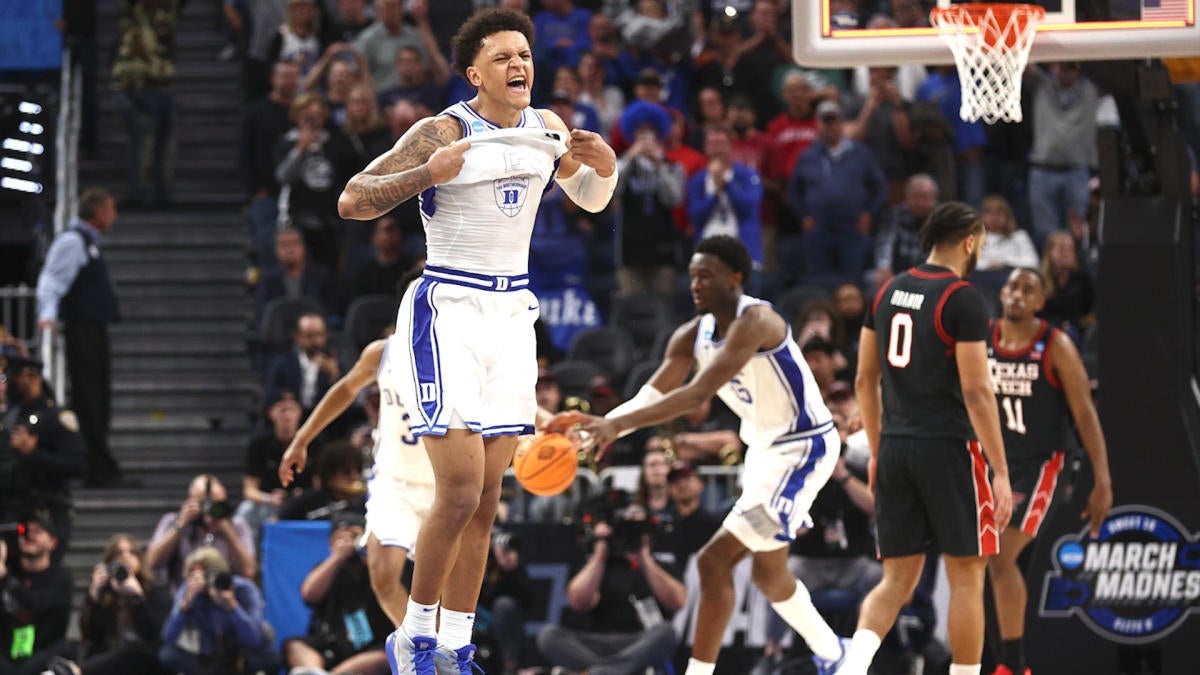 Happy Friday, everyone! Congrats on making it through another week.

We have a little bit longer of a first section this morning, so let’s get right to it.

The young Duke Blue Devils have grown up in a hurry, and as a result they’re heading to the Elite Eight. Last night, Mike Krzyzewski‘s retirement was delayed yet another game after his team topped Texas Tech, 78-73.

Simply put, this was Duke playing its best basketball at the best possible time:

Simply put, this is not the same Duke team as it was a few weeks ago when it got demolished at home against North Carolina to end the regular season and then demolished again by Virginia Tech in the ACC Tournament title game. This is now a team that rallied late for the second straight game and, down the stretch, absolutely shredded the nation’s best defense.

We’ve talked a lot about “what if Duke could just put it all together?” this season. Last night, we saw it — and it was terrific.

Look up the word “versatile” in the dictionary and you’ll see this Arkansas team.

In the Razorbacks’ first game of the tournament, they won playing slowly but efficiently. In their second game, they won with defense. Last night, they took out the top overall seed playing fast. That’s right, Arkansas beat a 1 seed for the first time in program history, topping Gonzaga, 74-68.

The Razorbacks have now made consecutive Elite Eights for the first time since the mid-1990s.

Mature. Smart. Composed. Call them what you want; the Villanova Wildcats just win. Last night, they toughed out a 63-55 victory over Michigan, led by 22 points from Jermaine Samuels.

Villanova is comfortable in who they are and impossible to rattle, writes our Chip Patterson:

The Houston Cougars are tough as nails. They’ll leave you exhausted and demoralized, and they don’t care who’s in their way. Last night, it was Arizona which saw its season end at the hands of Kelvin Sampson‘s squad by a score of 72-60.

This is a team that lost two of its best players — Marcus Sasser and Tramon Mark — to injury during the season and hasn’t skipped a beat. The Cougars just find ways to beat you. It starts with ever-present energy, hustle, offensive rebounding and attention to detail. When they add in 3-point shooting and terrific guard play, they can beat anyone. Arizona found that out last night.

In 2017, Gonzaga made its first NCAA Tournament championship game, narrowly losing to North Carolina. The ‘Zags may not have won it all, but they had arrived as a national powerhouse.

In the five seasons since, no team has won more games (in fact, no one has even won more NCAA Tournament games) … but the wait for that title continues.

This year seemed as good as any for them to end the drought.

Some of the names were familiar. Some were new. Gonzaga was the overwhelming title favorite at sportsbooks, in brackets and by analytics. But the end result was the same disappointment. Perhaps their best chance to win a title may have just passed them by, writes college basketball reporter Matt Norlander.

In a single-elimination tournament, one bad night ends your season. Gonzaga found that out the hard way, and that’s nothing new.

The men’s Sweet 16 rolls on with four more games tonight:

UCLA and North Carolina have combined for 17 NCAA Tournament titles, with the Bruins accounting for 11 (most) and the Tar Heels for six (third-most). It will be a treat to see these two historic programs face off, writes Patterson:

Despite multiple chances, the United States men’s national team settled for a 0-0 draw against Mexico last night. While it’s not a particularly exciting result, it’s a massive point for the US.

Thanks to Panama drawing against Honduras, the USMNT can all but clinch a World Cup berth with a win Sunday in Orlando against Panama. Here’s what the top of the standings look like with two matches to go. Remember, the top three teams qualify.

I know that the USMNT is no stranger to disasters, but even that scenario seems a little far-fetched. To stay updated on everything USMNT, you can check out our podcast here.

Best and worst signings so far in NFL free agency 🏈

So, what were the best free-agent moves? The worst? NFL guru Jordan Dajani says the reigning champs occupy the top spot so far.

Here’s the rest of the top five:

As for the worst moves, you can check them out here.

What we’re watching this weekend 📺

As for everything else…