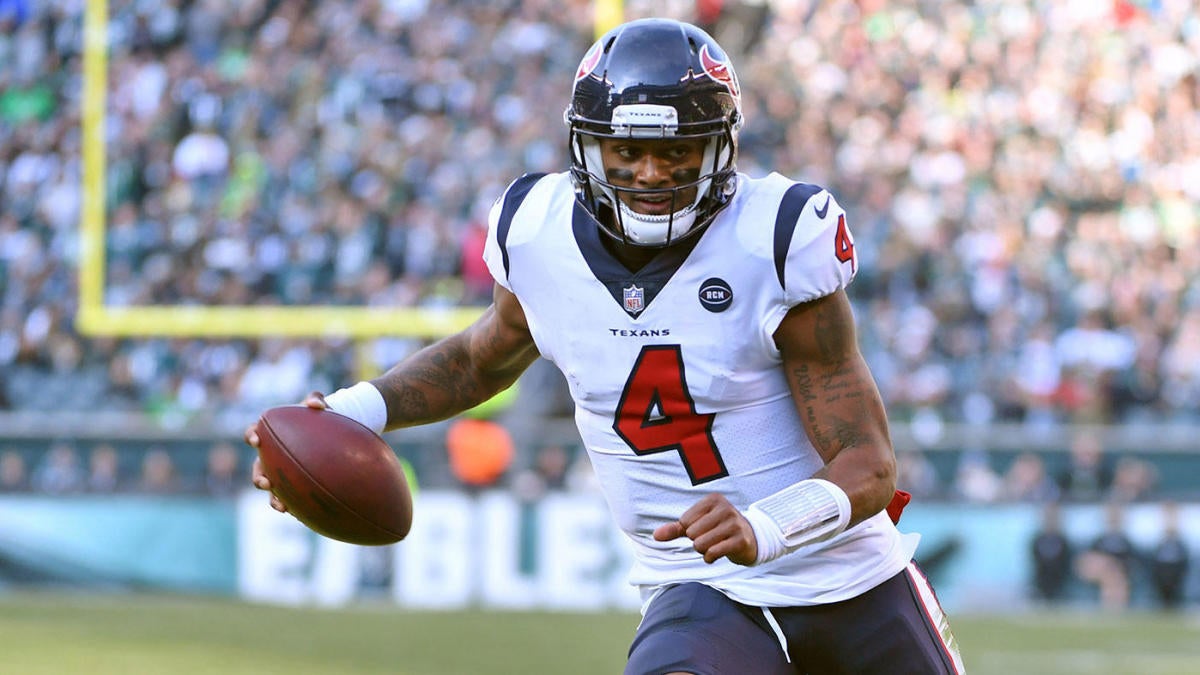 The NFL quarterback market picked up all kinds of steam in the days leading up to 2022 free agency, with the Packers retaining Aaron Rodgers, the Broncos landing Russell Wilson from the Seahawks and the Colts shipping Carson Wentz to the Commanders. But another move — perhaps the biggest yet — could still be on the way. Embattled Texans QB Deshaun Watson, who’s reportedly been seeking a trade since the start of last offseason, is a likelier candidate to be dealt after Friday’s legal proceedings in Houston, where a grand jury determined he will not face criminal charges for allegations of sexual misconduct in massage sessions.

Watson still faces 22 civil lawsuits alleging misconduct, as well as potential NFL discipline, which does not have to accompany criminal charges. Suffice to say, fair or not, he does not come without risk. From a football perspective, however, at 26 with three Pro Bowls and a proven arm on his resume, he could still warrant a lucrative return via trade.

Which teams would actually be in the mix for the former first-rounder? Here are the potential landing spots, sorted from least to most likely:

Out of the mix

These teams may have considered Watson at one point, but you can safely cross them off the list:

Broncos: GM George Paton promised to be aggressive in pursuit of an upgrade, and he delivered, landing Russell Wilson in the offseason’s biggest blockbuster deal.

Colts: They could use him as much as anyone, but the Texans won’t deal him in the division. Besides, GM Chris Ballard wouldn’t be eager to hitch his wagon to a QB with so much baggage after Carson Wentz’s messy split.

Dolphins: GM Chris Grier has publicly confirmed as much, despite their reported longtime interest in the QB. New coach Mike McDaniel appears genuinely interested in developing Tua Tagovailoa in 2022.

Giants: Owner John Mara has explicitly ruled out the possibility. They would’ve struggled to afford him anyway.

Steelers: They’re reportedly not interested, which jibes with the notion they’re instead prepared to throw multiple darts at QB in the wake of Ben Roethlisberger’s retirement.

Don’t count on them landing Watson, but don’t totally rule them out, either:

Browns: They’ve committed to Baker Mayfield getting one more audition, but only until a clear, feasible upgrade presents itself. GM Andrew Berry learned under aggressive Eagles GM Howie Roseman, Cleveland has some cap flexibility, and the roster already has the foundations of a playoff contender.

Jets: They’re flying way under the radar here, and odds are they’ll stick with Zach Wilson just one year after picking him No. 2 overall. But they’re loaded with cap space ($48.5M), Watson reportedly likes coach Robert Saleh, and they’d get more of a proven thing at QB in a big market desperate for better football.

Saints: Once again, they’re in terrible salary-cap shape, but that hasn’t stopped GM Mickey Loomis from swinging big before. After a year of middling stopgaps post-Drew Brees, they might see the wide-open NFC South as an opportunity to pounce.

Vikings: New coach Kevin O’Connell seems interested in working with Kirk Cousins, but new GM Kwesi Adofo-Mensah has every reason to shop the veteran and his $45M cap hit. Watson, sans criminal issues, would represent a more promising long-term investment for a team in transition. Plus, he’s reportedly interested in Minnesota.

Buccaneers: They’ve got cap hurdles to clear, but GM Jason Licht found a way to pry Tom Brady from the Patriots and retain basically his entire Super Bowl-winning supporting cast. With Bruce Arians desperate for a quick fix post-Brady, Watson is their last star option. Watson, meanwhile, would likely sign off on the East Coast move to a franchise that’ll do anything for its QB.

Eagles: Content as they may be rolling with young Jalen Hurts for 2022, the Eagles have repeatedly refused to rule out a Watson move, all while reportedly investigating the QB over the last year-plus. Their three first-round picks give them plenty of ammo, and GM Howie Roseman is notoriously aggressive. The biggest issue: Watson is seemingly hesitant to go to Philly.

Panthers: Perhaps no team with a remaining QB vacancy is as desperate as Carolina. After failed mid-tier gambles, they need to go big, either via trade or in the draft. And they’ve reportedly had eyes on Watson for a while. With over $26M in cap space, they can afford to make it work. As with Philly, however, the question lies with Watson’s willingness to join a so-so team.

Seahawks: After unloading Russell Wilson, they have other executives convinced they’re in on Watson, who would instantly give them another elite QB, not to mention potential long-term security. They certainly have the capital to make a deal, plus the cap space. And Pete Carroll has managed troubled vets before. But is drafting a successor more likely?