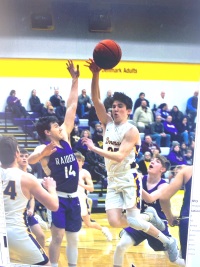 Figuring it was their only hope to pull the first-round Division 3 upset, the Purple Raiders junked up their defense all night, often putting a defender in front and in back of the 6-10 UW-Green Bay signee, while zoning everywhere else.

It worked in one sense: Short was scoreless at the half and finished with just 10, less than half of his season average. It failed in the larger sense: Denmark walloped Two Rivers, 78-38, to advance into the regional semifinal at Southern Door on Friday night.

That strategy may have served the Vikings well in another way as they seek a deep postseason run in that it allowed other players to step up. The fact that so many did  – seven Vikings scored six or more points – should provide a boost of confidence going forward. The Big Two of Short and Hayden Konkol have carried Denmark all year but the postseason will certainly require everyone contributing.

On Tuesday, no one was better than point guard Lucas Miller, who filled the stat line with15 points, (unofficially) eight assists and two steals.

“Luke played very well,” said Denmark coach Cody Stelmach after his team improved to 17-8. “We’re running into that a lot in the second half of the season with teams scheming to take away Donavan and it ends up being 4 on 3 or 3 on 3 if they also try to stop Hayden (Konkol).

“Teams are daring our guards and they are doing a better job of making them pay. Whether it’s  Alec (Pelischek) making shots or Ethan (Ovsak) and Luke playing consistent or Drake (Derricks) being more aggressive getting into the paint, we are getting a lot of help from a lot of different guys.”

Denmark led by just nine two minutes into the second half before closing the game on a 48-17 barrage.

In Southern Door, Denmark is getting a familiar foe. The Vikings beat the Eagles, 72-63, back in late November, when Short went for 28 and Konkol 18. Denmark limited leading scorer Drew Daoust (20 ppg) to just 11, in part because earlier in the season he was coming off the bench and also because Konkol’s 6-4 length dealt him fits.

But Daoust remains a dangerous player. He poured in 26 in the Eagles’ opening-round 61-52 victory over New Holstein (they trailed by seven at halftime) and two years ago, torched Denmark for 33 points in a regular-season battle.

Though Southern Door isn’t a prolific three-point shooting team, Daoust (41 threes at 37 percent) and Nick Pierre (53 threes at 34 percent) will have to be watched closely on the perimeter. Pierre knocked down four from deep against New Holstein.

“Southern Door is just a scrappy team,” Stelmach said. “They play six or seven guys but rely pretty heavily on their five starters. So we’re hoping to push the ball and use our depth to wear them down. It’s nice that only two of their guys take a lot of threes but we have to make sure they don’t get comfortable. They’re playing at home and if they get hot that can be trouble.”

Last year, Denmark was lit up by 15-of-24 three-point shooting by Luxemburg-Casco in a season-ending loss so the Vikings will be mindful of that on Friday.

Taylor Schaefer averages 10 points per game; Pierre 8.4; and Jared Hawkey – at 6-4, the Eagles’ only real size – chips in nine points and nine rebounds.

“Our height should really help us against them,” Stelmach said. “We should be able to protect the rim, get rebounds and second-chance points and get it inside. With a few days to prepare for us, I look for them to probably look for a way to double Donavan so we’ll have to be ready for that.”

Brillion, the top seed in the region, would likely be the next barrier for Denmark if they take care of business on Friday. The regional final is on Saturday. Denmark beat Valders and Roncalli this season, two teams that beat Brillion in Eastern Conference play.

“That’s conference play so I don’t put a lot of stock in those losses,” Stelmach said. “But I do think our conference is one of the best in the area and that will give us an advantage. We can win any of these games and I feel like we have guys who are reaching their ceiling.”