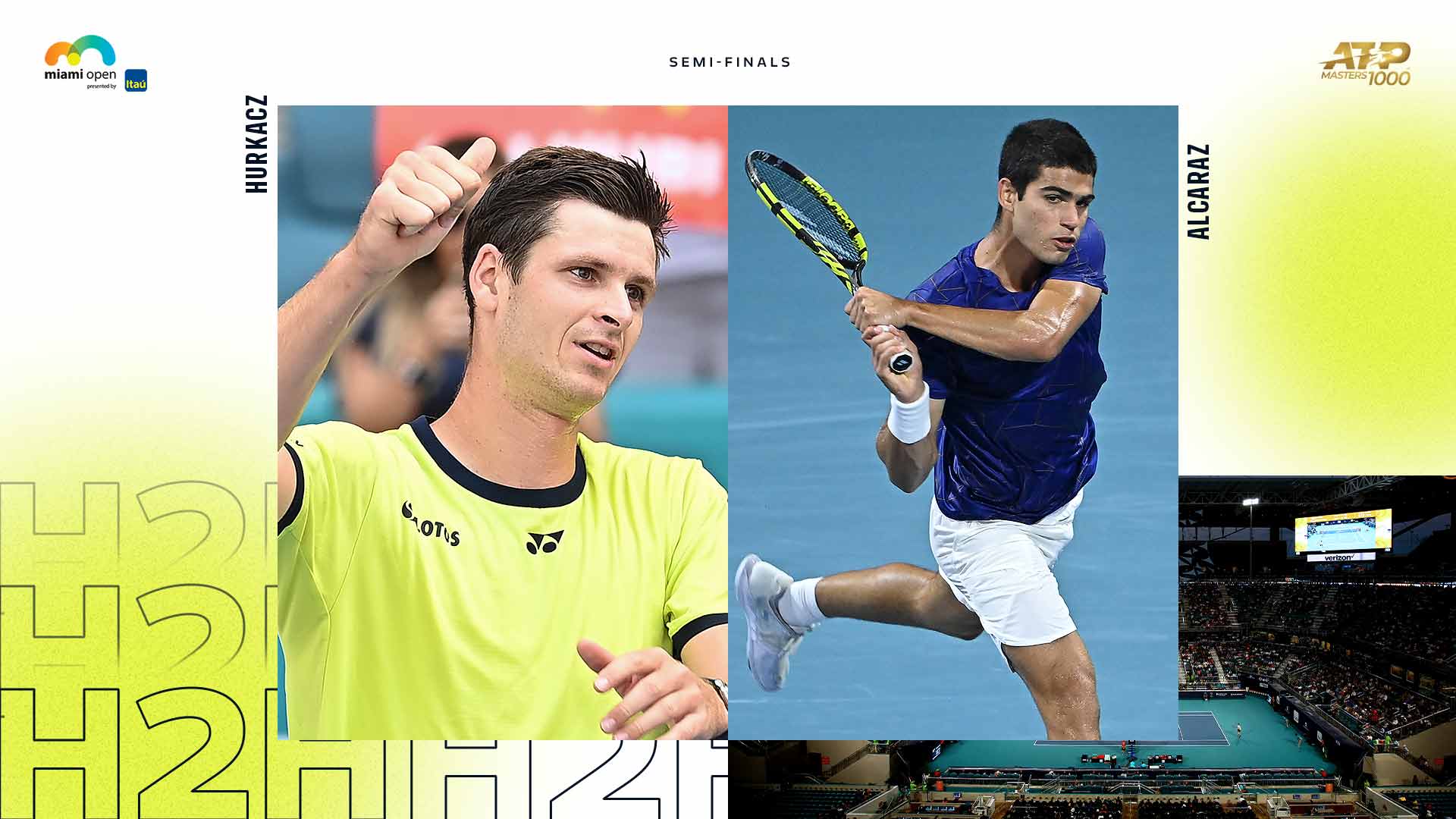 With college basketball’s March Madness down to the final four in the U.S., so too is the second leg of the March Masters at the Miami Open presented by Itau. Defending champion Hubert Hurkacz bounced top seed Daniil Medvedev in the quarter-finals to keep his repeat bid alive, while Carlos Alcaraz, Casper Ruud and Francisco Cerundolo are still on course for a first ATP Masters 1000 title.

Friday’s singles semi-finals are the only men’s matches on the schedule on Day 10 in Miami.

Hurkacz rides a 10-match winning streak into this semi-final showdown as he prepares to face one of the ATP Tour’s hottest players under the Miami sun. The Pole has won three tie-breaks en route to the last four, dropping just one set — to 29th seed Aslan Karatsev — on his way. The 25-year-old seemingly can’t lose in Miami, as he’s also through to Saturday’s doubles final alongside partner John Isner.

Hukacz is thriving under the slow conditions in South Florida, and the same can be said for Carlos Alcaraz, who nurtured his game on Spain’s clay courts in his youth. Though he’s played just one match in Hard Rock Stadium, the fiery 18-year-old has quickly become a fan favourite in Miami as he’s powered through Marin Cilic, Stefanos Tsitsipas and Miomir Kecmanovic to reach back-to-back Masters 1000 semi-finals following his Indian Wells run.

“I think that I’m playing in Spain,” Alcaraz said of the stadium crowd’s support in his 6-7(5), 6-3, 7-6(5) quarter-final win over Kecmanovic. “It’s unbelievable. The energy that they push to me, it was crazy. I think without them it would not be possible to get into the semi-final today.”

Hurkacz also made sure to give some love to the crowd following his 7-6(7), 6-3 win over Medvedev — a result that denied Medvedev the chance to reclaim the top spot in the ATP Rankings, and improved Hurkacz to 4-0 against Top 10 opponents in Miami.

“I love the atmosphere here. I don’t know. Just feels so good and playing my good tennis here,” the Pole said. “Definitely enjoy the full crowds here this year.”

The pair will open their ATP Head2Head account when they meet on Friday evening, with no rest day following their quarter-final wins. Alcaraz, now 16-2 on the season, is bidding for his second ATP Tour title of 2022 following his Rio de Janeiro crown in February. Hurkacz enters at 14-5, his best prior result coming in a semi-final run in Dubai. The World No. 10 could become the fifth man to repeat in Miami, following Novak Djokovic, Roger Federer, Andre Agassi and Pete Sampras.

Alcaraz, already the third-youngest semi-finalist at the event, could become the youngest champion in its 37-year history. Only two men have won an ATP Masters 1000 title at a younger age — Michael Chang (1990, Toronto) and Rafael Nadal (2005, Monte Carlo) were also 18 on their first triumphs. Alcaraz turns 19 on May 5.

Sixth seed Casper Ruud and Argentine Francisco Cerundolo will both be aiming to reach their first ATP Masters 1000 final when they face off on Friday.

However, Cerdundolo has flourished as the underdog on his Masters 1000 debut in Florida. The 23-year-old, who triumphed at an ATP Challenger Tour event in January, has scored sizeable wins this week over Tallon Griekspoor, Reilly Opelka (second-set retirement), Gael Monfils, Frances Tiafoe and Jannik Sinner (first-set retirement due to foot blisters).

“It means a lot [to advance],” Cerundolo said after reaching the semi-finals. “It is everything I have dreamed of. My first Masters 1000, my first semi-final, I might rise to near No. 50 [in the ATP Rankings]. This is going to change everything for me.”

Cerundolo arrived in Miami holding a 0-2 tour-level record on hard courts, but the World No. 103 now looks at home on the surface. His fairytale run means he is the lowest-ranked men’s singles semi-finalist in tournament history (1985-2019, 2021-22) and the first player to reach the singles semi-finals on his Masters 1000 debut since Jerzy Janowicz advanced to the final at the Rolex Paris Masters in 2012.

If the Argentine wants to match Janowicz’s achievement he will have to overcome World No. 8 Ruud in what will be the first ATP Head2Head meeting between the pair.

The 23-year-old, who is making his third appearance in Miami, earned the biggest win of his career by ATP Ranking when he eliminated World No. 4 Alexander Zverev 6-3, 1-6, 6-3 to reach the last four.

“It feels good and it means a lot,” Ruud said following his victory over the German. “This is my first semi-final in a Masters 1000 on hard courts, so that’s a good feeling. I’m very happy to do it here in Miami.

“I’ve felt good the couple weeks I’ve been here practising and the matches have felt very good. I want to of course keep going. Today was my toughest challenge yet of the tournament and on Friday will be another big one. I hope that I can take what I’ve learned from my three previous [Masters 1000] semi-finals and bring it into Friday’s match.”

The Norwegian has continued to make steady progress this year after enjoying a standout 2021 season, which saw him crack the Top 10, clinch five tour-level titles and advance to the semi-finals on debut at the Nitto ATP Finals in Turin.

So far in 2022, he has earned ATP Cup wins over Dusan Lajovic and Cristian Garin in January, before he triumphed in Buenos Aires. When Ruud takes to court against Cerundolo on Hard Rock Stadium, it will be the first time he has played a Masters 1000 semi-final on hard, having reached the last four at clay-court events in Rome (2020), Monte-Carlo (2021) and Madrid (2021).