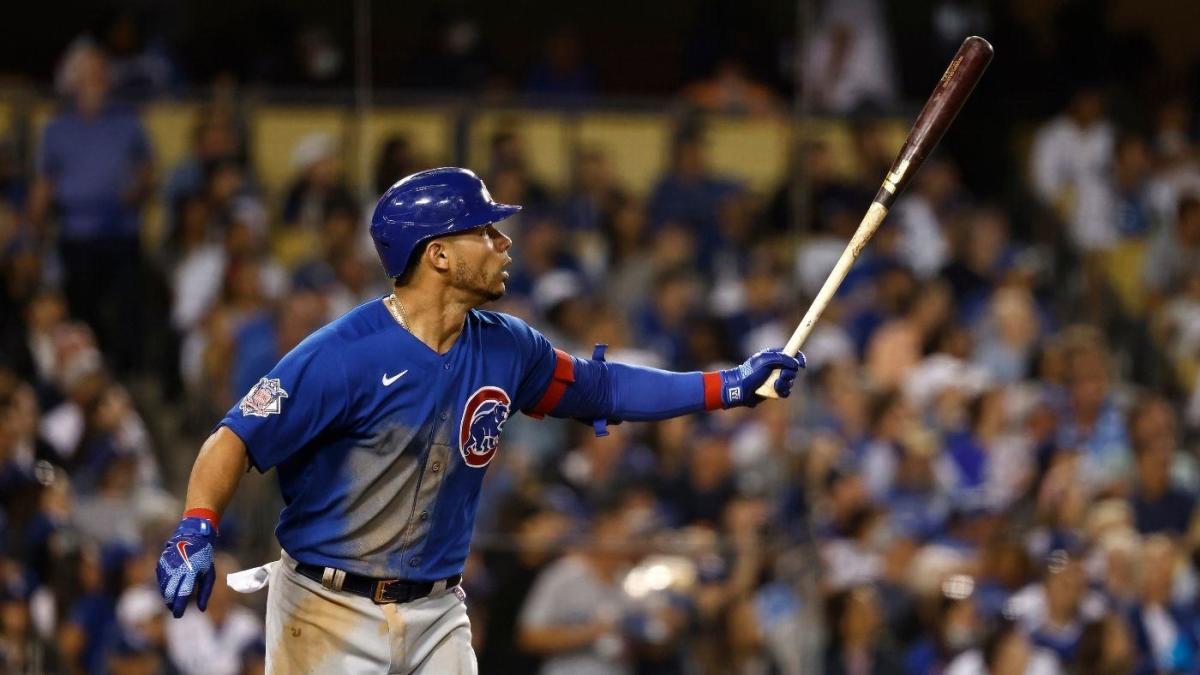 The 2021 Cubs made it painfully obvious for die-hard Cubs fans when a chunk of the World Series core was traded in July and the team stumbled to a 71-91 finish despite being tied for first place as late as June 24. It was the worst Cubs finish since 2013 and the eyes should now be fixed on the future. What’s done is done. What will happen next?

There are all kinds of moving parts here. Hoerner will see starts at second, short and possibly multiple outfield spots. Heyward’s days of being a starter aren’t fully behind him and he could even see time in center. Frazier wasn’t brought in to just ride pine, as he’ll get starts both at DH and in the outfield. Villar could bounce around the diamond. Wisdom can start at either corner infield spot to free up DH for someone else. Contreras is one of the handful of catchers who could viably DH when he’s not behind the plate.

Also, David Bote will return from shoulder surgery at some point while Alfonso Rivas, Ildemaro Vargas, Sergio Alcántara, Michael Hermosillo and others could get a look at some point.

Simply, there will be mixing and matching on a daily basis.

Again, all kinds of moving parts.

Steven Brault, Steele, Thompson, Norris and Adrian Sampson are among the many Cubs being stretched out as possible starters in spring training. Steele and Thompson in particular last year got looks for the Cubs both as starters and relievers. Mills and/or Smyly could end up in the bullpen.

Brailyn Márquez’s stock rose greatly a few years ago, but 2020’s lack of a minor-league season teamed with a shoulder injury last season have meant just 2/3 of an inning of regular-season game action since 2019. He’s still only 23 and has big upside, but he would need a huge stint in Double-A and then Triple-A, in all likelihood, before joining the fray.

Right-handers Tommy Nance and Robert Gsellman are also in the mix while righty Adbert Alzolay and lefty Brad Wieck have what appear to be pretty serious injuries, though they could factor late in the season.

I chose Wick as closer, but there likely won’t be just one. Robertson and Givens are early-season save candidates and someone like Effross or Rodríguez could emerge as the season goes on.

Maybe teams should workshop their mottos? I don’t know, I’m just not sure “it’s different here” is an incredibly marketing job to sell the fan base on getting exciting about this team. I guess at least it isn’t false advertising? It’s absolutely different. This is how they are firing up the fan base now:

No offense to Happ, Schwindel and Wisdom, but pictures like that the past several years would have featured all-time likable Cubs that helped win the World Series in 2016 like Kris Bryant, Javier Báez and Anthony Rizzo.

Beneath the surface, though, there’s a reality that things needed to change. “Different” is what was needed. The 2018 team lost the wild card game. The 2019 team collapsed in September and missed the playoffs. The 2020 team won the division in a 60-game season after a 13-3 start by going just 21-23 the rest of the way — before scoring only one run in two playoff losses to the Marlins in Wrigley Field. The 2021 team was succeeding with smoke and mirrors until things caught up and they lost 11 games in a row to effectively end the season.

Two realities can exist at the same time. The first being the Cubs’ previous core should be given all the credit in the world for ending the fake curse and winning the World Series. The second being that the group was stale and it was just never going to happen again without drastic changes.

Those changes have been made. The only vestiges of the 2016 championship are Contreras (possibly will be traded this season), Heyward (might be mostly a bench player this season) and Hendricks. Oh, and David Ross, but he’s the manager now.

So, yeah, it might be awkward and lend itself to mockery to sell “it’s different here,” but different was ultimately what was needed, even if a payoff won’t be happening in 2022.

Heard that latter part before? Yeah, the Cubs just went through this last year with several franchise icons and club president Jed Hoyer showed he had no issue trading players, no matter the sentimental value.

Of course, Contreras is a valuable catcher and if the Cubs are planning on turning things around here in the short term, it would make sense to keep him around.

Just because negotiations with other players didn’t work, that doesn’t mean they won’t work with Contreras. But he’s also been around long enough for us to realize the inconsistencies aren’t going anywhere. It’s easy to dream on something like “what if he does this for a full season?” — but after 621 career regular-season games, he’s turning 30 years old this season. This is what he is, no? And will he want to be paid for what he is or what he believes he can be?

If the Cubs fall out of contention by mid-July, which seems a pretty decent chance, expect to see Contreras rather heavily involved in trade rumors.

How good is Suzuki?

The good news for Seiya Suzuki is with Contreras around to start the season, he doesn’t have to immediately shoulder all the spotlight on offense. Coming off the heels of what just happened in the last half-decade or so, he won’t have to deal with being considered a franchise savior or anything and that’s always a plus.

Can he live up to that? The swing looks the part, especially in the power department:

It’ll be fun to watch.

For 2022, the Cubs have plenty of questions to answer. They’ll start looking to sort those out on April 7. There’s a lot of depth, but the jury is still out on whether or not it’s quality depth.

Optimistic types could squint their way to seeing a decent enough ballclub to make a run at something like 84 wins and possibly the final wild-card spot. The Reds with 83 wins last year would’ve been the six seed under this new playoff format, after all. Players like Ortega, Schwindel and Wisdom showed late last season they could be worthwhile. We’ve seen the great spurts from Happ and Contreras. Frazier is freed from whatever was happening with him in the Bronx. Madrigal and Hoerner and contact-and-average hitters. Simmons is still an exceptional fielder at short.

Speaking of which, if the Cubs create a great defensive infield around Simmons, look no further than Hendricks, Stroman and Miley in the rotation — all of whom were in the top 20 in the majors in groundball rate last season.

There’s enough depth and talent after those three to fill out 4-5 quality rotation spots and a good bullpen.

There’s also enough downside here to finish even worse than the 91-loss team did last season. So much could go wrong. There’s a reason they are signing all kinds of depth pieces and it could be construed as a “just hope something sticks” plan. Bona fide playoff teams don’t have to resort to that.

This isn’t likely one of the five worst teams in baseball, but it also really doesn’t look like a playoff team.

Finding the next championship core

This means the major task for the Cubs in 2022 is finding what players they have in the organization that could be part of the next World Series team.

We already covered Contreras and how it’s a question that needs answered. Suzuki is surely in those plans. Stroman and Hendricks could be gone after 2023, so who knows?

And then it’s all in-season evaluation. From the Ortega/Schwindel/Wisdom types to Hoerner/Madrigal on down to prospects like Marquez and hotshot Triple-A outfielder Brennan Davis, the most significant task for the Cubs’ front office in 2022 is to find which players fit with the long-term plan.

Even in the remote chance that the Cubs can hang around in contention for the final NL playoff spot, the 2022 year is much more about deciding the future path for so much of the roster within the organization. Sure, squeaking into the playoffs would be a relative success, but it would be a much more successful season to get questions answered on dozens of players, even if those answers are negative.