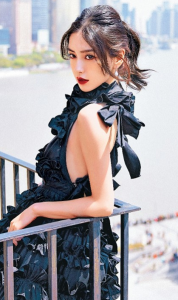 Known for his bold views on the Chinese entertainment industry, outspoken screenwriter Hailin Wang‘s (汪海林) revelation that the National Radio and Television Administration is requesting artistes to change their foreign-sounding names back to real names has uncapped heated discussions!

Celebrity Names Come Under Spotlight
On September 2, the veteran screenwriter behind the likes of classic drama The Eloquent Ji Xiaolan <鐵齒銅牙紀曉嵐> had alleged, “Yang Ying can no longer call herself Angelababy, and La Mu Yang Zi must also use a Chinese name…calling (yourself) by a foreign name or foreign-sounding name will no longer be allowed,”

Stirring heated discussions, netizens pointed out the potentially great impact of the requirement on actress Angelababy (楊穎), who is much better known by her English moniker than her real name “Yang Ying”; with 50 times as many online discussions tagged with “Angelababy” as compared to the latter.

There was also talk that artistes whose names included four characters will have to revert to their birth names. Hot on the heels of Hailin Wang’s revelation, Chinese influencer La Mu Yang Zi (辣目洋子), who found widespread popularity after appearing on variety show Everybody Stand By <演員請就位>, swiftly posted an update on social media that she would be reverting to her real name “Li Jia Qi (李嘉琦)” instead of her four-character name, adding “My mom says, everything is better the way it was”. As her birth name sounds similar to the name of “Lipstick King”, influencer Austin Li Jiaqi (李佳琦), she prompted fans to address her by “Little La (Xiao La)” instead.

The names of popular A-list artistes Jackson Yee (易烊千璽) and Dilreba Dimurat (迪麗熱巴) were similarly not spared from scrutiny, but fans were pacified when checks revealed that their current stage names are indeed their real names.
Netizens also called on popular singer G.E.M. (鄧紫棋), who recently shared about her name change to Gloria (歌莉雅), to return to the use of her real name to avoid stepping on regulatory boundaries.
Lambasted by netizens for spreading misinformation, Hailin Wang defended himself and said he was stating the truth and what many already knew, and took pot-shots at the Chinese press, as he was puzzled by their “similarly shocked reactions” to the revelation.
As of press time, Angelababy has maintained silence on the matter. The 33 year-old continues to use her English name on her official Weibo profile.

Regulators Move In
Sweeping state regulations on Chinese showbiz has seen artistes including “effeminate male stars” and “misbehaving artistes” being blacklisted, and drama productions being pulled for reasons from plunging necklines to homosexuality references and incorrect values.