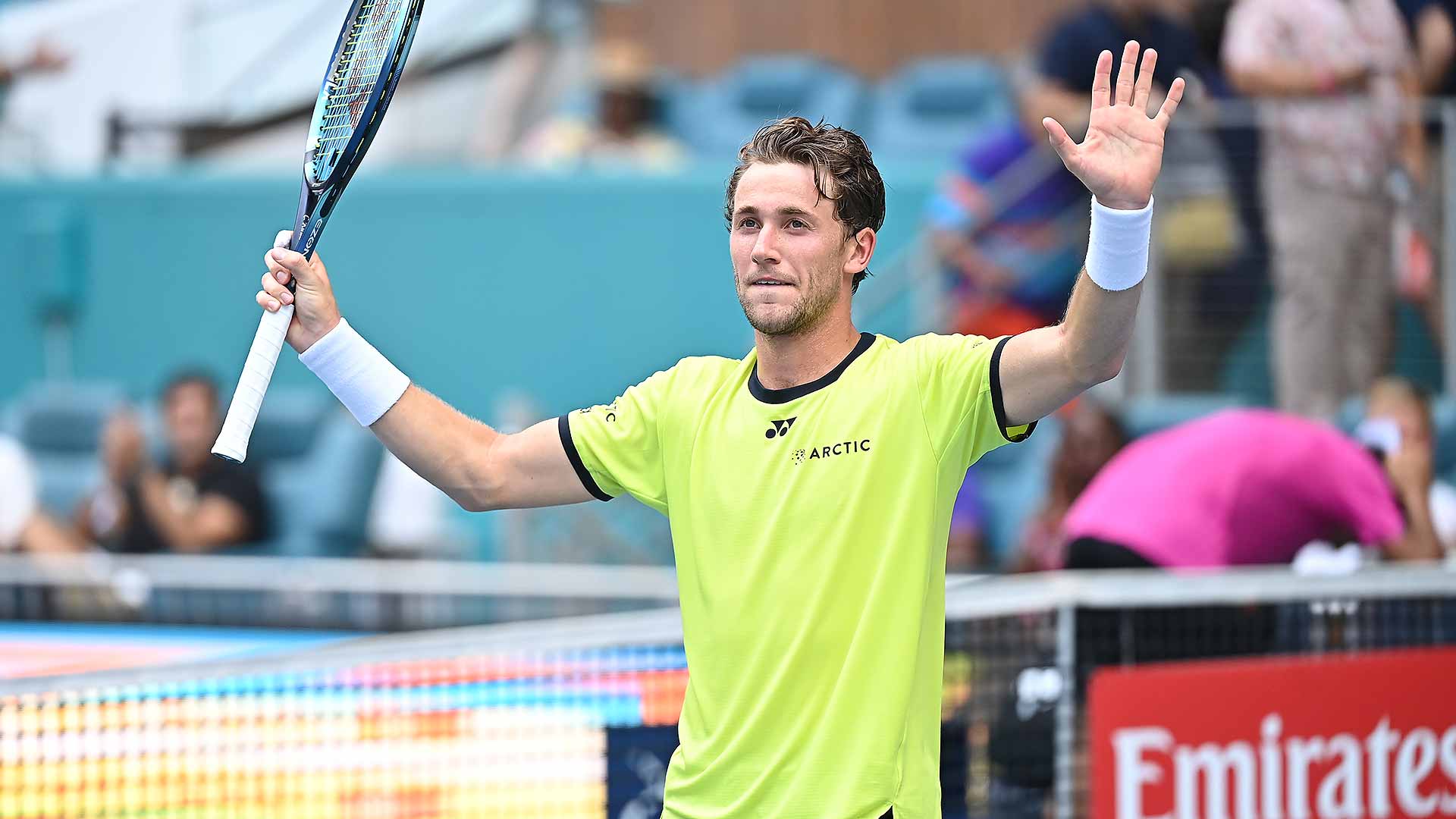 The Norwegian held a 0-3 record in semi-finals at Masters 1000 level heading into his match against World No. 103 Cerundolo. However, the sixth seed produced an aggressive and consistent display on Hard Rock Stadium to ensure he would not fall at the penultimate stage again, triumphing 6-4, 6-1 after one hour and 34 minutes.

“It is a great feeling. I am standing here smiling,” Ruud said in his on-court interview. “I have had three tough loses in my previous Masters [1000] semi-finals and I thought today was a good chance to reach my first final. I started a little shaky but I was able to pull through and raise my level when I really needed to.”

Ruud has captured seven ATP 250 crowns in his career and advanced to the last four on debut at the Nitto ATP Finals last year. The World No. 8 used all of his big-match experience to his advantage against Cerundolo, who was making his Masters 1000 debut this week.

Cerundolo held a 0-2 tour-level record on hard courts when he arrived in Flordia, but he has had enjoyed a fairytale journey in Miami. The 23-year-old overcame Tallon Griekspoor, Reilly Opelka (second-set retirement), Gael Monfils, Frances Tiafoe and Jannik Sinner (first-set retirement due to foot blisters) en route to the last four.

However, Ruud outplayed Cerundolo in the crucial moments in their first ATP Head2Head meeting, pulling Cerundolo from corner to corner as he broke four times to seal victory.

“It was not where I imagine myself playing my first Masters 1000 final [on a hard court], but I will take it,” Ruud added. “It is a great feeling and I am enjoying the city and the tournament. It was pretty brutal today. Very humid, which made the breathing a little tough.”

Ruud, who earned the biggest win of his career by ATP Ranking when he eliminated World No. 4 Alexander Zverev 6-3, 1-6, 6-3 to reach the last four, will face reigning Miami champion Hubert Hurkacz or #NextGenATP Spaniard in the championship match on Sunday.

Ruud, who advanced to the semi-finals at Masters 1000 clay-court events in Rome (2020), Monte-Carlo (2021) and Madrid (2021), is aiming to capture his second tour-level title of the season this week, having lifted the title in Buenos Aires in February.

With his victory over Cerundolo, Norway has become the 33rd country to be represented in a Masters 1000 final. Ruud is also the first Scandinavian to advance to a final at this level since Swede Robin Soderling in Paris in 2010.

In a lively start, breaks were exchanged as both players tried to find their range and brush aside early nerves. Having settled, Ruud began to impose himself on Cerundolo with his water-tight groundstrokes. He hit with great precision and was eventually awarded for his patience in the 10th game of the set when Cerundolo fired long to hand Ruud the lead.

Fuelled with confidence, Ruud put his foot down in the second set as he forced Cerundolo to overhit by striking with great depth. The Norwegian saved all four break points he faced in the set and secured his victory on serve after sucking the energy out of the Argentine with his intensity.

Cerundolo was the first player to reach the semi-finals on his debut at this level since Pole Jerzy Janowicz advanced to the title match in Paris in 2012. The World No. 103 was also the lowest-ranked Miami semi-finalist in the tournament’s history (1985-2019, 2021-22).