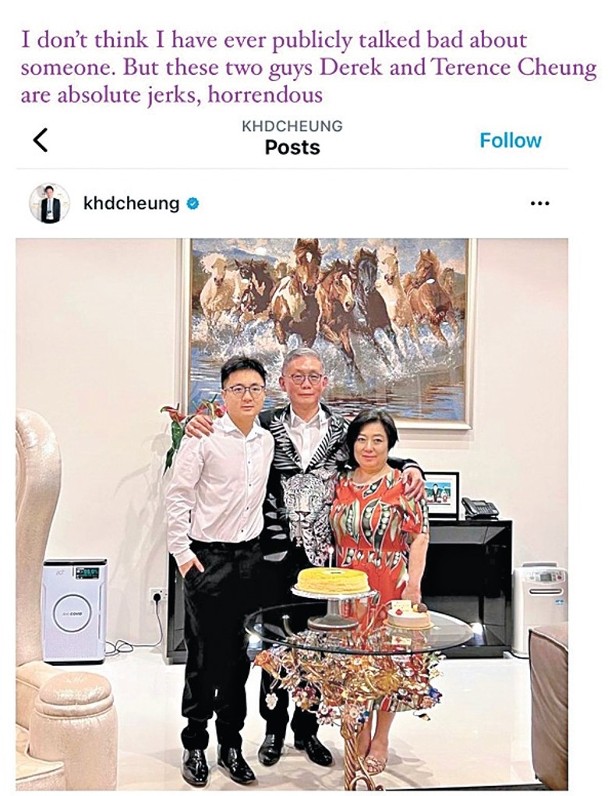 Former TVB actress Candy Yuen (袁嘉敏) is known as one of Hong Kong’s sex icon after her appearing in a nude scene in 2015’s film The Gigolo <鴨王>. The former actress had since stepped away from the entertainment industry, but Candy is making the headlines after she openly blasts rich third-generation and Hong Kong’s esports tycoon Derek Cheung (鍾培生) and his father Terence Cheung (鍾仁偉) for their despicable behaviors.

In a series of Instagram posts, Candy posted a picture of Derek with his parents and aired out her grievance, “I don’t think I have ever publicly talked bad about someone. But these two guys Derek and Terence Cheung are absolute jerks, horrendous.”

Candy further posted a picture of a red pocket and added, “I always try to see the goodness in people, try to be a friend who would listen and be there to help when needed. Sometimes it’s fairly disappointing when people are so selfish, superficial and twisted. One year with the Cheung. What a nightmare. Thank you for all the breakfast, lunch, dinner and all the wine. Maybe I owe you two in my past life. No more long chats. I am too nice.”

Candy’s posts have attracted netizen’s attention on Candy’s personal life. As Candy had been rumored to be taken in by a rich tycoon and reportedly lived in a mansion costing 40,000 yuen a month, netizens are beginning to suspect that Candy may have a complicated relationship with Cheung family.

Shortly after, the media approached Candy for more details but Candy replied, “The situation is very complicated. The father and son duo made some very odd requests.”

When the media probed if the Cheungs’ requests were sexual, Candy replied, “I don’t want to talk about it right now.” Candy added that she used to be good friends with the Cheung’s but she would no longer remain in contact with them.