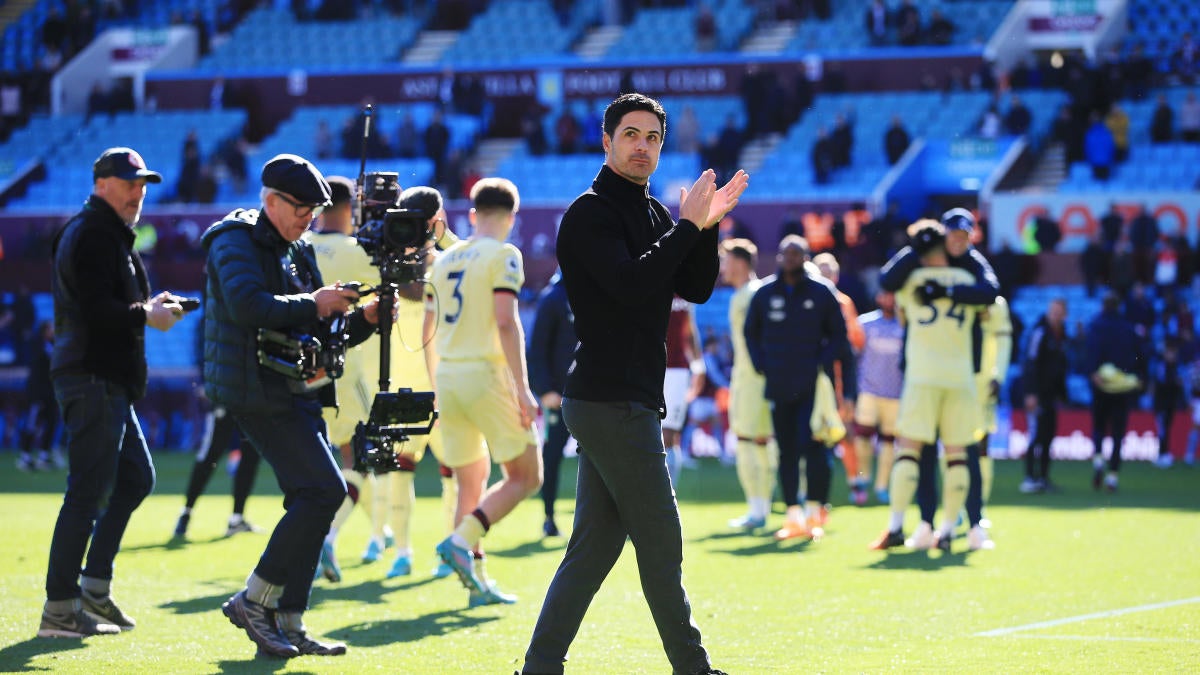 BIRMINGHAM — It was some time ago that Arsenal supporters fell head over heels with much of this deeply likeable team of youthful vigor. Mikel Arteta though, that was a harder task. An admired but never adored club captain had become something of a dogmatic figure on the touchline. After two straight eighth place finishes some of his critics feared he might raze Arsenal to the ground while the chances he could build it back from the ashes remained very much in doubt.

You would struggle to find many Arsenal doubters at Villa Park today. Instead the away supporters were serenading “super Mik Arteta,” the man who “knows exactly what we need.” For a manager who has spent more of his career coaching in empty stadia than with the crowd at his back, it must have been a particularly welcome treat to have the fans on his side at last.

“That’s what gives sense to everything we do,” he told CBS Sports. “You realize it in those moments that those people have big emotions towards the club, and you can make them happy. Everything just makes sense. The connection that they showed with the players and with me as well, you just have to be very grateful because they have come along on this journey, and I think believe on what we do.

“Personally, it feels great, because we’ve been through a lot and we played nearly two years with no crowds. To gain something that, in my opinion, was the most important thing, which is unity around the club and a sense of direction and belonging, it was going to be really important and it produces belief and energy.”

Such was the vitriol aimed at him on social media (if not ever in the Emirates Stadium stands) Arteta might be inclined to hold a grievance against those who doubted him but now want on the bandwagon. “They can jump! The more people we have on board the better.”

The exertions of Wednesday’s defeat to Liverpool were writ large across this Arsenal performance, but, crucially, that grueling loss stayed confined to midweek. This was not a performance as good as that, but the result was all the more precious. Not for nothing were the Arsenal faithful crying out loud that they are “on their way to the Champions League.” They might just be right, four points clear of Manchester United with a game in hand.

When Arsenal clicked into gear they were simply too much for this exceedingly ordinary Villa side to deal with. Two elegant move in the first 20 minutes were just a finishing touch away from delirium. A rushed shot from Thomas Partey on the edge of the box was comfortably saved by Emiliano Martinez, who could have done nothing at all had a better shot come his way soon after.

Emile Smith Rowe, in for the ill Gabriel Martinelli, began it with his customary quick feet on the left and a whipped pass out to the right, where Bukayo Saka and Martin Odegaard combined to release the former down the byline. A clipped ball to the near post was too tempting for Smith Rowe, who barged through Lacazette, denying either of them a clean strike at goal.

More experienced Arsenal teams, scarred by so many Arsenal-y performances, might have wavered in their task. These youngsters simply kept grinding their way towards goal. The winner came from the most unsurprising of sources, Saka’s seventh in 11 top flight games. As the free-kick that he and Cedric had stood over clattered around the penalty area he anticipated that it would eventually fly out to the edge of the box, where this 20-year-old with the brain of a veteran fizzed a low drive into the bottom corner.

Saka is Arsenal in microcosm. For a long time he has been labelled as a promising project. A while ago, it became clear that he and they are the real deal. No wonder Villa felt they had little choice but to engage in what looked like rotational fouling. His Arsenal team mates were incensed when Tyrone Mings went through him to win the ball, receiving just a yellow card for his troubles. Ashley Young was doing well just to get close enough to Saka to foul him.

At the full time whistle the England international made a beeline for referee Andy Madley, not to complain but to advise him that as an explosive, dynamic and creative player he would need help from officials. Again, the actions of a veteran.

With and without the ball Villa were off the pace. Home punters could have been forgiven for making for the toilets when they began working goal kicks out short, their advances up the pitch would have had a tortoise turning back to shout “would you hurry up?” It took Steven Gerrard’s side an hour to take a shot on goal, John McGinn bending wide from outside the box.

“We didn’t deserve anything for our first half performance,” acknowledged Gerrard. “Arsenal played really well, controlled a lot of the first half and we had too much respect for them. We lacked belief in ourselves collectively. It wasn’t really until the game got into the second half we started showing anything near to where I wanted it to look. No complaints about the overall score line.”

They never really looked like crafting a quality chance of their own with Thomas Partey and Granit Xhaka gumming up the path to Emiliano Buendia and Philippe Coutinho, whose curling strike with the last kick of the ball brought a first save out of Bernd Leno. All they could really hope was that Arsenal’s tired legs and tired minds might bring mistakes. It has happened before after all.

But with Rob Holding in place to anchor the back five, Villa never got particularly close, ending the game with a stream of low value shots and headers. The headlines will rightly go to Saka and Arteta but this was the ninth of the last 13 top flight matches where the Gunners have kept their opponent to shots worth less than one expected goal combined. Solid at the back with match winners at the other end of the pitch. Is there still room on that bandwagon?