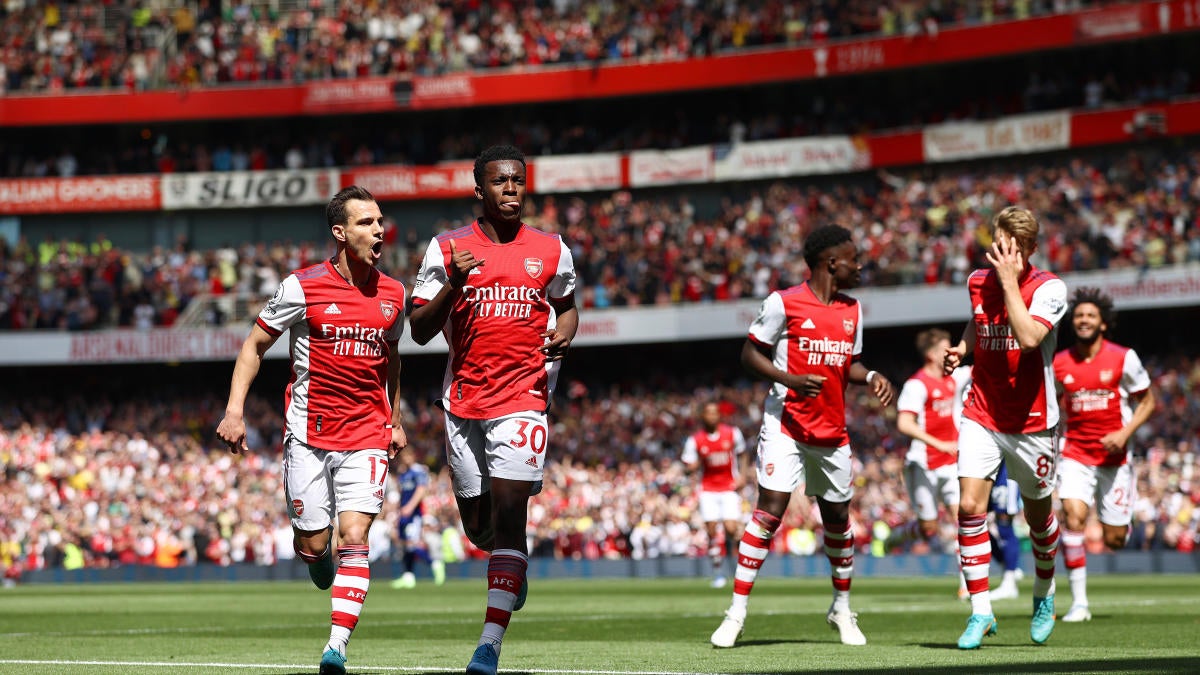 LONDON — With their bid for a top-four place faltering at the end of last month, Arsenal manager Mikel Arteta needed a hero. Eddie Nketiah answered the call.

After 10 minutes he was making that familiar phone signal; it might have been for the second time had he not demurred from celebrating against the club he spent half a season on loan with in the Championship. That was supposed to be the making of the highly regarded young striker, who turns 23 at the end of this month. It was not quite, but these recent games might be.

His early brace proved to be enough as Arsenal set up the dream scenario for their supporters — win at Tottenham on Thursday and they are back in the big leagues. Even defeat away to their rivals would not rob them of the fourth and final Champions League spot, their advantage now set at four points. Mikel Arteta’s side gave Leeds a way back into this 2-1 victory but their best moments were capped by goals, something that has not always been the case this season.

Nketiah now has four of them from his last four Premier League games, all hard fought victories that have put Arsenal in command of their destiny, and all came from open play. Pierre-Emerick Aubameyang (two) and Alexandre Lacazette (one) might have sat above him in the pecking order at the start of the season, but their combined output cannot match what the youngster has delivered in this critical run of games.

This might be it for Nketiah — a last stand at the club that gave him his senior break. His contract expires at the end of the season and he has made no secret of his frustrations over the limited playing time afforded to him (just 1722 Premier League minutes in the last five seasons). When asked by CBS Sports whether there is an offer on the table if he wants to stay, Arteta said: “Eddie is doing what he has done all season. He has been very consistent with his performance and how little he is giving away.

“Let him be. Let him enjoy the moment. He completely deserves it. Things will happen naturally.”

Against the team that had largely confined him to the bench in the first half of their 2019-20 promotion-winning season, Nketiah clattered around with a point to prove. It took him just five minutes to do so; spotting a heavy touch by Illan Meslier he clattered into the goalkeeper, winning the ball and poking it into the net. It says everything about this poacher supreme that he has five goals from closer range.

Leeds were in disarray at the back. Junior Firpo had no answers for Bukayo Saka on the right, across the field Luke Ayling seethed with indignation at how easily Gabriel Martinelli was getting past him. The Brazilian barely had to move out of second gear to roast the visiting defense on his way to the byline. Nketiah was on hand to deliver his version of a long-range screamer, calmly stroking the ball in from level with the penalty spot.

This is Nketiah v1.0, the base template that every coach has known they are getting from England Under-21s’ record goalscorer. It has at times been used as a stick with which to beat him, the idea that he is a finisher and no more, one that rather seems to diminish the importance of goals in a low-scoring sport. Still if that were not enough to convince anyone of his worth, he is clearly expanding his repertoire.

Arsenal thought they had struck creative gold when Alexandre Lacazette replaced Pierre-Emerick Aubameyang, effectively switching from a pure finisher to a creative forward who would bring others into play. The fear, as the goals ran dry for the Frenchman, was that entrusting Nketiah with the starting spot would rob the creative midfielders of someone to play off. He is beginning to disprove that, dropping deep into midfield for quick lay offs that would allow others to run beyond him. He has a strong sense of how to position his body to keep the ball from center-backs whilst giving himself an angle to spin out to safety. Each of his first 10 passes found a teammate, and he offered Martinelli a tandem on the left in a not too dissimilar way to that which Martin Odegaard aids Saka.

Leeds had, in Jesse Marsch’s words, “dug [themselves] a massive hole”. It only got deeper when Ayling slid in two-footed on Martinelli. The only point of contention was that Chris Kavanagh needed VAR to tell him what had been obvious to everyone in the ground except him, that it was a red card challenge.

For an hour and change Arsenal had kept Leeds from even taking a shot, something they had not managed in any of the previous four seasons. Whilst the travelling faithful, bedecked in shirts wishing a good recovery to Stuart Dallas after his broken leg, made quite the racket, their players had been reduced to little more than training cones as Arsenal weaved attacking patterns. Twice Martinelli got in behind only to skew his efforts off target.

Then Leeds burst forward for the first time in the half, winning themselves a corner. Flicked to the back post by Firpo, Llorente was on hand to volley fiercely past Aaron Ramsdale at his near post.

Suddenly the nerves jangled whilst Leeds, desperate to avoid slipping into the bottom three, opted to swing for the fences. Cedric was bullied off the ball by Jack Harrison, a better pass and substitute Rodrigo was through on goal. Odegaard flashed wide but Arsenal struggled to up the tempo as they had so effectively in the first half. Instead it was Leeds setting the agenda in their desperation to avoid the drop. Before the clock had reached 90 minutes Meslier was charging up for a corner; when Kalvin Phillips shot off the clearance was deflected into Nicolas Pepe’s path it seemed certain Arsenal would charge down the pitch to wrap the game up. Instead the club record signing failed in his attempt to nutmeg Lewis Bate; the agony would not abate.

At the final whistle assistant manager Albert Stuivenberg was sufficiently unimpressed as to give Pepe a talking to on the pitch. “Probably when you see that he has an empty net in front of him and he is taking a touch backwards, we could not really understand,” said Arteta. “But you have to have the perception of the player in that moment. They are the ones who make the decision.

“Fortunately we didn’t need that goal.” Only just. Another late set piece, flicked on by Junior Firpo to Rodrigo, his header just too close to Ramsdale. Until the end Arsenal were clinging on, Gabriel doing just enough to keep an onrushing Daniel James from the ball. He collapsed on it at the last, his work done, a far more draining task than it might have been. Luckily for Arsenal, Nketiah had given them room to breath.