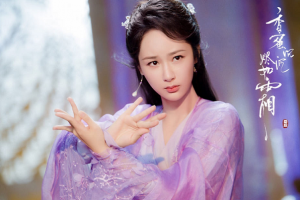 Starring Yang Zi (楊紫) and Cheng Yi (成毅), anticipation for period drama Immortal Samsara <沉香如屑> ran high and the xianxia drama was shortlisted by CCTV as one of the to-watch productions. However, a recent 12-minute long trailer triggered fan displeasure over the poor quality of its dubbing work – with the actors’ original voices overlapping with the dubbed voices, and the revelation of the entire plot progression which “left little to viewers’ imagination”.

1. Yang Zi’s Character and Styling Fail to Stand Out
Immortal Samsara is adapted from a novel of the same name by Chinese author Su Mo (蘇寞), and tells the story of Tang Zhou, Yan Tan and Yu Mo, who go on an adventurous trip and accidentally recover their lost memories. Tang Zhou and Yan Tan found out that they had a previous affinity, clear up their misunderstanding and get back together, joining hands to defeat evil à la sadistic Xianxia romance.

While the costumes, set, props and special effects in the trailer did not disappoint, and lead actress Yang Zi also performed up to her usual standards, her imaging and characterization in Immortal Samsara were not sufficiently differentiated from her previous acts in 2018’s The Destiny of White Snake <天乩之白蛇傳說>, Ashes of Love <香蜜沉沉燼如霜> and other xianxia dramas, and thus failed to impress fans.

2. Lack of Novelty
A key highlight of the drama is male lead Cheng Yi portraying three characters – the cold Ying Yuan, the wise and vengeful master Tang Zhou and the villainous Xuan Ye. While the trailer teased the charisma of the respective characters, the familiar themes of reincarnation, memory loss and sadistic romance prompted fans to poke fun at the production for simply lumping all the tried-and-tested xianxia plot elements together, with no breakthrough highlights. While it is unable to surpass the bottlenecks of the genre, Immortal Samsara could well become the representative work new-age xianxia drama if done well.

With the recent trend of historical idol dramas split into two parts, such as Ren Jialun (任嘉倫) and Bai Lu‘s (白鹿) One and Only <周生如故> having a modern companion series Forever and Ever <一生一世>, and this year’s The Blue Whisper <馭鮫記之與君初相識 / 馭鮫記之恰似故人歸> starring Dilireba Dilmurat (迪麗熱巴) and Ren Jialun also running two seasons, Immortal Samsara is riding on the wave in giving viewers two parts to catch.

3. Concerns about Dramatic Pacing
Reportedly totaling 80 episodes (released in 2 parts with 40 episodes each), viewers are apprehensive about the series being able to sustain their interest till the end. Besides concerns that it might suffer from unduly protracted storytelling that would dampen the drama’s overall ratings, fans of the two idols Yang Zi and Cheng Yi are also worried it might affect the reputation of the two leads.