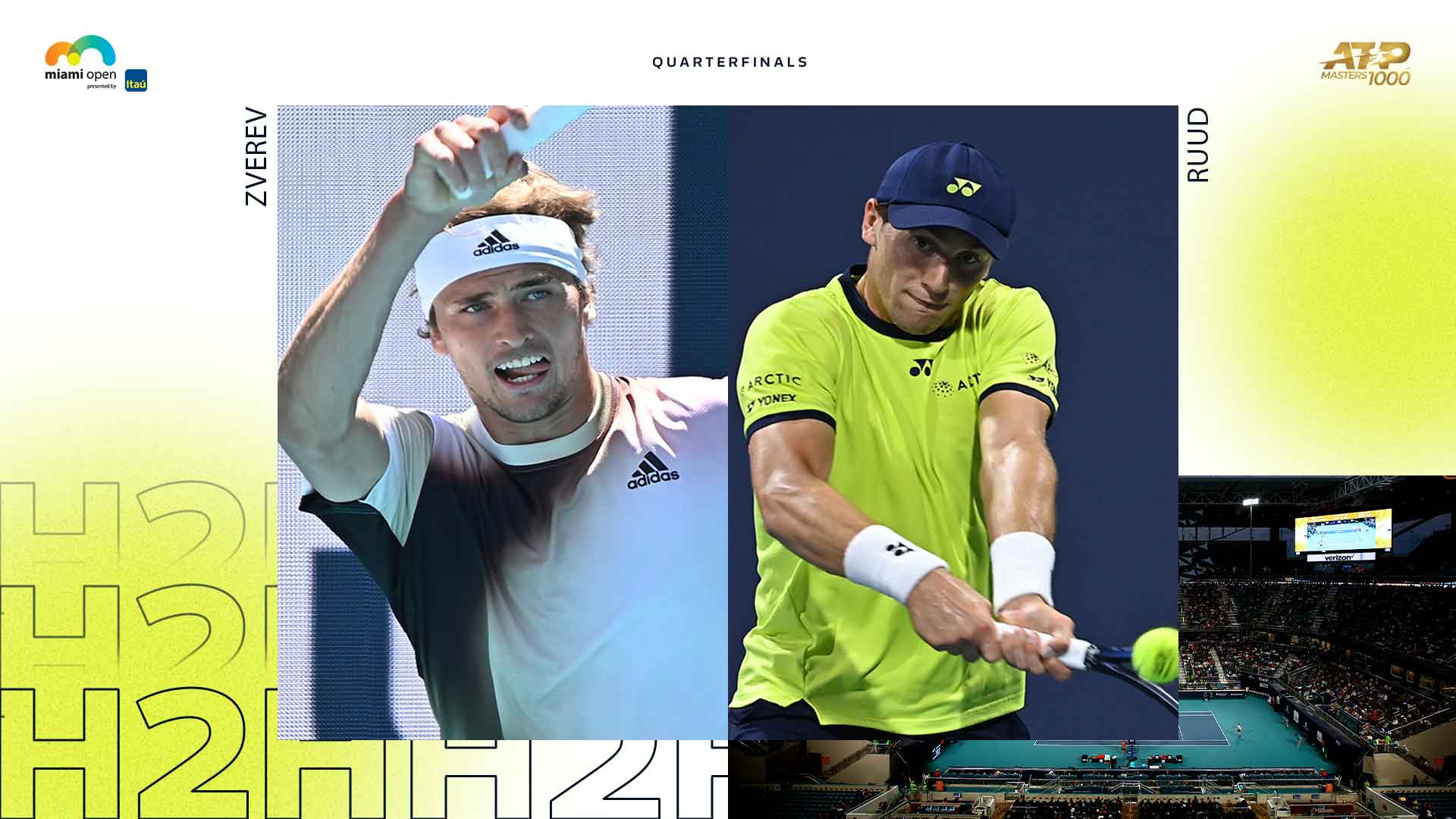 The pair met in the last eight at the Western & Southern Open and the Rolex Paris Masters in 2021, with Zverev coming out on top in straight sets in both. The 2018 finalist Zverev has looked back to his best in Miami so far after a tough start to the year and produced a solid all-round performance to down Thanasi Kokkinakis in the fourth round, but the second seed will not take anything for granted against Ruud.

“I think he [Ruud] is playing great tennis,” said Zverev after his win over Kokkinakis. “The way he beat Cameron Norrie [in the fourth round] on a hard court is quite impressive, and I think when he’s playing like that he can beat anybody.

Ruud certainly showed off that ball-striking prowess in his straight-sets win over Norrie, dictating play from the baseline against one of the best defenders on Tour. His 6-3, 6-4 win means the Norwegian has dropped just 15 games on his way to the last eight.

The sixth seed had not won a match at the Miami event prior to this year but will now feel adding a first Masters 1000 title to his seven ATP 250 triumphs is a real possibility. The 23-year-old certainly has all the weapons required to test Zverev on Wednesday.

Argentine Francisco Cerundolo will aim to keep his dream run going in Miami when he plays ninth seed Jannik Sinner in the quarter-finals.

The 23-year-old has made a stunning impression over the past week on his ATP Masters 1000 debut, upsetting seeds Reilly Opelka, Gael Monfils and Frances Tiafoe en route to the last eight. However, the World No. 103, who arrived in Florida with a 0-2 tour-level record on hard courts, will face his toughest test yet when he takes to court against #NextGenATP Italian Sinner for the first time.

Sinner negotiated a tricky fourth-round test by moving past Australian Nick Kyrgios 7-6(3), 6-3. The 20-year-old admitted that he feels comfortable playing in Florida but knows he will have to maintain his level to defeat the 23-year-old Cerundolo.

“I like the crowd. I like the situation here,” Sinner said. “Obviously every match here is very tough. Everyone deserves to be where they are. So the quarter-finals are going to be a tough match and I hope I will be prepared.”

Sinner has fond memories in Miami, having become just the fourth teenager to reach the championship match in the tournament’s 37-year history last season when aged 19. Only Andre Agassi, Rafael Nadal and Novak Djokovic had previously achieved the feat.

This year, the ninth seed saved eight match points across his first two matches in Miami before he eliminated Kyrgios to advance into the last eight. Sinner is a five-time tour-level titlist, but has yet to find the winning formula this season, with his best results in 2022 quarter-final runs at the Australian Open and the Dubai Duty Free Tennis Championships.