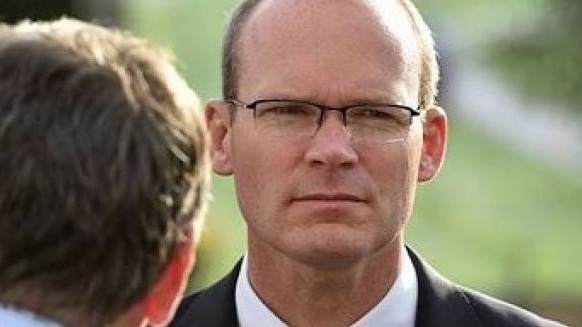 Partnership has been absent between the British and Irish governments in recent years regarding Northern Ireland, the Minister for Foreign Affairs Simon Coveney has told an audience in the United States.

Speaking at the John F Kennedy library in Boston he said this was an acknowledgement he was slow to make publicly, but that it was true.

He pointed to the arrangements for dealing with legacy issues in Northern Ireland. He said there had been an agreement to which everyone – except one party – had signed up to for how this should be achieved including the establishment of new structures and allowing for a route to justice and truth recovery.

However he said “unfortunately we have seen the British government effectively say they are no longer committed to that approach to deal with the legacy of the past”.

He said “we are trying to figure out how we can get back to a partnership approach on something as sensitive as legacy”.

Mr Coveney said there was a need for the governments to work together on sensitive issues to find compromises together where possible.

“I believe we can do that and work with the leaders and the parties as they emerge from this very polarising election next week.

“The governments working together is a key catalyst for what is required over the summer. And, of course, mature and in some cases courageous leadership in Northern Ireland from party leaders and from leaders within parties – they are not always the same thing – to try to find a way forward is also important.”

Mr Coveney again said the institutions established under the Belfast Agreement 25 years ago were more under threat now than at any other time in their history. He made similar comments on a visit to Washington to meet the Biden administration and senior politicians on Thursday.

“The Good Friday agreement requires structured north south cooperation which has not been functioning for well over for over a year now; it requires devolved government in Northern Ireland, which was collapsed a number of months ago and it requires east-west structured co-operated between the British and Irish governments – this is happening but has been under some strain.

“In my experience Northern Ireland tends to function reasonably well when the British and Irish government are working together in partnership.

“The biggest change in recent years is that that partnership has been absent – that is something I am slow to say publicly but it is true.

“We need to re-build that partnership approach between the two governments on how we deal with the challenges that the parties face in Northern Ireland for the people they represent.

“If the two governments are not the anchor or the foundation that helps the parties to find compromise and understanding, then relationships become even more challenging,” he said.

Mr Coveney forecast that putting a devolved government structure together along with the other institutions that flow from the Belfast Agreement would be very difficult after the May 5th elections.

He said it was likely that there would be a potential shift in the size of parties as they related to each other.

“We may well see Sinn Féin being the largest party in Northern Ireland which will be the first time that a nationalist party has been larger than the largest unionist party.”

“That in itself is causing friction, tension and anxiety and uncertainty for some in the unionist community which will make the compromises that are necessary to put an executive and a functioning devolved government in place in Northern Ireland more difficult.”